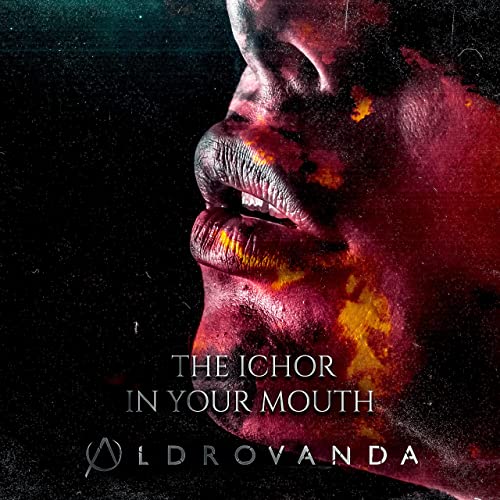 Aldrovanda (Sweden) – The Ichor in your Mouth (single)

I admit I had to look up ‘ichor’. There are two meanings. The first is “the fluid that flows like blood in the veins of the gods” (often the blue blood of the Greek Gods) and the second is “a fetid watery discharge from a wound or ulcer”. I thought we could safely assume the first interpretation applies here. But can we?

There are factors which impact on how I initially respond to unsolicited emails about bands. This is definitely one of them –

“All members of the band have had some sort experience or struggle with mental health issues, and this song is an encouraging love letter to all of those with the empowering message that as long as you keep pushing yourself forward…you will find inner peace.”

I reckon it’s true to say that just about everyone has become flaky and unhinged at one time or another during the pandemic and I’ve often wondered how those people suffering from mental issues already would have coped. I even see tonight that the televisual media in the UK has belatedly (only 20 months late) produced a programme about it.

Stockholm-based Aldrovanda (a type of carnivorous plant by all accounts) was formed by two school friends, Gustav (guitar) and Jacob (bass) in 2018 with the intention of creating their own, unique sound, outside of their previous experience but with a rock/metal influence (at least one of the band members has such a background but the others have different back stories). In 2019 they were joined by David (drums) and Sanna (vocals). There was also a second guitarist, Rebecca, who moved on to new pastures recently.

They released numerous singles quite quickly, built up a following and were about to start touring just as that became impossible, which merely galvanised them to record more songs, of which this is one.

‘The ichor in your mouth’ is specifically concerned with “overcoming crippling doubt, fear and addiction, and about finally settling the score with your past experiences while finding back to your true self. The song encapsulates the struggles that come with immense feelings; and the release when you finally prevail and reach the relieving conclusion.”

The first comment I’d make is on the production quality, which is very high, even on Soundcloud, which is where I’m hearing it. Sometimes, when guitar, bass and drums are all played rapidly as they are here there is a tendency for notes to become indistinct but there’s none of that thank you; it’s all crisp and clear.

Sanna has that ability that all female vocalists aspire to (and I can say this with certainty as a follower of symphonic metal) of being able to switch quickly from ballad to belt and back again.

Indeed musically there are shades of symphonic metal in this production, especially in the quick-fire syncopated interplay between guitar, bass and drums that I just mentioned. But the guitar solo is something else. It’s the sort of thing you rarely hear these days, an outcast from 1980s glam metal, and right up there with the one in fellow countrymen Europe’s ‘The Final Countdown’.

Mainly on account of that solo I was slightly surprised that the song was allowed to fade out after it without a third rendition of what is a powerful anthem-strength chorus but taking it in the context of “…the release when you finally prevail and reach the relieving conclusion” that would seem to explain it.

Lyrically, I’m still undecided about how to interpret ‘ichor’ but I’m gravitating towards the ‘watery discharge’ version, courtesy of the line “Lost your cause, you feel deprived, and the ichor in your mouth tastes like lies”, signifying perhaps how you can taste your own fear. (And the image does help!)

But happily all is resolved here anyway, as the song concludes with the ‘debt’ of past negativity having been paid.

While it does not specifically reference the pandemic I suspect it will become an anthem for the beginning of the end of it, if only on account of that terrific chorus.

‘The ichor in your mouth’ has just been released on streaming platforms. A lyric video will be released on 15th November and will be added to the Spotify link here when it is available.

I was impressed with this song from the moment I heard it and it will be top of the pile in the next Nordic Music Central playlist, due at the end of the month.

There is no news on an album or live dates here but hopefully both will materialise shortly. They promise “action packed shows filled with emotion, community and most importantly damn good music.” Just what the doctor ordered.

PrevPreviousVON KONOW (Finland) – Into the Wild (II) (single from forthcoming album)
NextLittle Tall Island (Sweden?) – The Mourning After (from the album We are all stars)Next