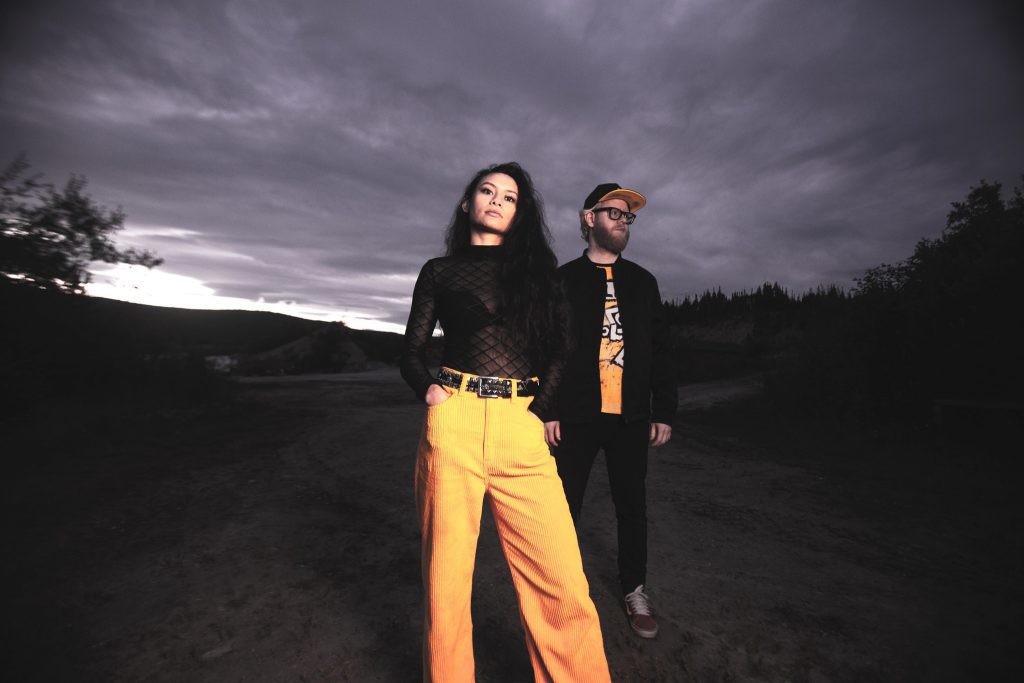 It’s rare that NMC gets to review an album from a band that has been heavily hyped prior to their debut album release but then again we’ve been doing some of that hyping ourselves. Ask Carol have made their mark here already with reviews of three of the tracks on their mammoth 18-track album (on streaming services) ‘AC 1: Control you’ which was released on their own Chovan Records label on 26th August.

(I say 18-track but three of them are very brief instrumentals, while there are a couple of remixes and a live version as well, so let’s call it a manageable 14-tracker).

They (Karoline Strømshoved and Ask Thorsønn Borgen) had a lot of time to write and record it, including the reworking of older songs, being holed up in their rural retreat of Auma in Østerdalen, 300km north of Oslo, for much of the pandemic, (and having been trapped in Karoline’s native Philippines when it broke out), playing their music (I kid you not) to the cows in neighbouring fields, in what they called their CowChella festivals. I reckon you can see where this DIY couple (they manage themselves, completely) is coming from, already.

Even before then the duo, who met at music school, played abroad extensively from 2016 onwards across Asia well they are well known, as well as making a couple of appearances at SXSW in Texas.

So they certainly have the pedigree. The question is, does it match up to the hype that I’ve bestowed on them already, let alone that of others?

It helps to make your mark when you are different, both musically and visually, and Ask Carol are different. The logical comparisons to be made are those of The White Stripes and the Ting Tings, if only because it is fundamentally a guitar/drums two-piece band, but that’s where the comparisons end. If they aren’t unique they aren’t far off it.

Ask is the drummer although he has other roles, while Carol does the vocals and plays guitar, or perhaps that should be guitars, as the huge array of pedals she has, together with assorted sampling devices means they can sound like the Polyphonic Spree when they want to.

And mentioning that band reminds me that it spawned Annie Clark (St Vincent). While their styles are different – though they both know how to use a fuzz pedal – there’s something about Carol’s virtuosity and swaggering playing style that reminds me of Dallas’ finest.

The album has a strange title. ‘AC 1: Control you.’ I assume it’s as simple as Ask Carol #1. Perhaps they are going to label everything numerically, ‘Factory Records’ style.

And it’s equally difficult to ‘label’ their style, which encompasses, inter alia, various rock manifestations, punk, blues, and even some grunge and an occasional dash of metal. The punk is particularly evident in Carol’s forceful sonic delivery but equally can she provide less strident vocals.

There’s nothing ‘less strident’ about the opening – and title – song, ‘Control you.’ A melody line that tracks The Beautiful South’s ‘Rotterdam (Or Anywhere)’ in the opening bars explodes into a cacophony of screaming vocal and guitars over Ask’s war drums. If they start a show with this as well, the promoter will wonder what he’s let himself in for.  There’s an interesting video for it too, in which Carol is transformed into something possessed.

I thought at first that the track might refer to lockdown and the ‘control’ exercised by governments through it but more likely is that it is a relationship-based song. It did prompt me to consider that all the tracks were written or reworked (as far as I know) during the pandemic, so that they will likely reflect different mental states accordingly.

Much the same assumption then might be made about ‘Pressure’s on,’ but in reality that track is about  the stress they felt when they revealed Ask Carol to the world by way of a concert in Seoul which no-one, including family and friends, even knew of.

As I said in the single review last month it’s pretty intense, manic even, like it’s the soundtrack to the coming together of the Tectonic Plates to form the world’s mountain chains, create new countries and to rip asunder continents, and to a memorable tune.

‘Tonight’ opens like Jimi Hendrix warming up for Woodstock before the song is dominated by Carol. When she screams (and I mean screams) “Take what you want tonight” you’d think Mia Farrow had just been introduced to the Devil or Linda Blair to Pazuzu. (And yes, many of their songs do have a palpable cinematic quality).

All change for ‘Quiet One,’ a slow-building piece of dream pop which morphs into a power ballad of epic grandeur as Carol rivals Bonnie Tyler in ‘Total Eclipse of the Heart’ for intensity.

And all change again for ‘Mountains of cash’, an older song re-released in a new, punky-metal guise as a full-on assault on the moneyed classes who cavort around the world from Acapulco to Monte Carlo in their private jets while the plebs survive as best they can. “You sit around on your mountains of cash/ you’re feeding off a disease…”

A powerful track delivered at an unrelenting pace. And it’s easy to see why Norway is struggling with its electricity supply just now. There’s so much fuzz on the guitar that Carol must have plugged it into the national grid.

‘Shining Bright’ and ‘Come Closer’ are new versions of old songs, the former an introspective contrast of darkness and light in the human condition and the latter a confessional about doing what Meatloaf said he’d never do without telling us what it was.

Picking up on cinematic themes ‘Run with you,’ which motors along at breakneck pace, could have been the theme to ‘Thelma and Louise.’

Speaking of motoring and road movies, the automobile and entertainment capital of the USA, is of course Los Angeles, La-La Land, Tinsel town, call it what you will. Ask Carol should have gone there for a meeting with record company bigwigs but the pandemic intervened.

Rather than sulk, they decided to make light of it and the result is ‘Do it in LA.‘  It’s a delight; genuinely funny from start to finish and brilliantly scripted.

“I know it sounds cliché, but it’s sunny every day, in LA/I got so many plans, I wanna take a chance, in Californ-i-a.”

“I want that VIP sign, and attention all the time, I gotta score…”

“I’m gonna fill up my lips, put a something in my tits, just gimme fame…”

“I’m gonna act like a bitch, and televise that shit, just gimme fame…”

It lies somewhere between Toni Basil’s ‘Mickey’ and Sheryl Crow’s ‘All I wanna do’ with lyrics that might have been written by Sarah Silverman.

How ironic it would be if it made them stars on Sunset Boulevard.

The album rounds off with ‘Darkest Hour,’ another abrupt volte-face, from mirth now to misery. It’s as if Carol had made the move to LA, leaving Ask behind in Auma and its all gone tits up. She’s living in a seedy Hollywood motel trying to make ends meet.

“In my deepest darkest hour/Where do I go?/Like a devil on my shoulder/Won’t leave me alone.”

And they produce a sound on this one that I haven’t often heard since the 1970s and bands like The Allman Brothers, Aerosmith… and Janis…

This album is packed with variety from start to finish and you never know what’s coming next. There’s everything from sophisticated sarcastic humour to cynicism to crushing desperation.

Incidentally, I’ve written a lot about Carol. Let’s not forget the economic but prominent Ask on the drums. If Carol has the answer, Ask poses the questions.

I asked at the beginning – does it match up to the hype that has been bestowed on them already?

Is the Pope Catholic?

Ask Carol will perform at Herr Nilsen in Oslo on September 16th and at Revolver, also in Oslo, on November 5th. That’s Bonfire Night in the UK but there will be fireworks in Oslo, too. Cows are welcome.

Speaking of the UK, hopefully they will turn up here too, before long. Just turn right out of Norway guys, rather than left as you would to Asia, and follow the setting sun. You can’t miss it.

Full reviews are available of each of three tracks pre-released as singles, on the NMC website. Just use the search tool for Ask Carol.