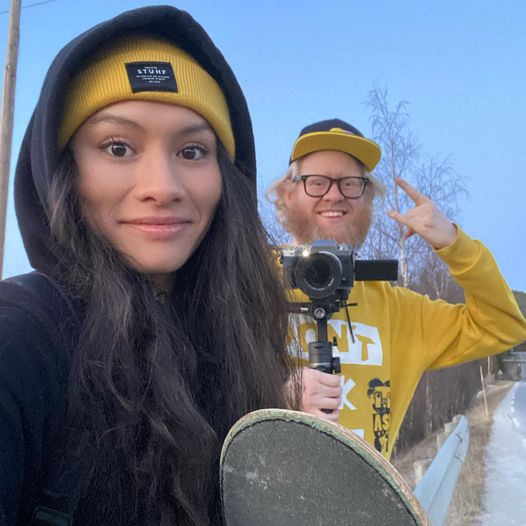 One of two Norwegian ‘Ask’s appearing here today and Ask Carol were here a few weeks ago with a song called ‘Quiet One’ which wasn’t quiet at all.

‘Mountains of Cash’ is a re-release of a song from a few years ago but “in a brand new wrapping”, as they say.

Coming just after the great and good (ha!) flew into Davos in their private jets to resume their annual Grande Bouffe while lecturing the hoi polloi about ‘climate change’ there is a temptation to attach that meaning to it, while “you’re feeding off a disease” might be interpreted as a reference to the way Pfizer, Moderna et al got very rich during the pandemic, except that the song predates that.

But as the song progresses it appears to be a backlash at the moneyed set generally, not just those who have power to go with it. The rich kids, the debs, the WAGs (“You say, My Daddy will pay”). On the original video Carol seems to spray the studio with air freshener before they start ,as they exchange wads of cash. Nicely symbolic.

This message will always strike a nerve with some people no matter how it is presented. Billy Bragg would love it. And then Ask Carol drives the message home by way of a thumping beat and uncompromising guitar.

The original has been spiced up and speeded up considerably. Measured in beats per minute it’s positively tachycardic. And there’s so much fuzz on the guitar that Carol must have plugged it into the national grid. I hear the lights went out in Oslo.

In fact it verges on metal at times.

I had a rummage around their Facebook page and there are several clips on there of the duo performing covers of classics from the likes of Led Zeppelin and the Rolling Stones, each with their own twist. It’s evident that they can play, they rock, they sound like a full-blown band and Carol carries around so many pedals she could launch World War 3 with them.

They are touring extensively in Norway at the moment, and I hear on the grapevine there is a chance there might be at least a short tour of the UK later this year. I hope so, we need Ask Carol as an antidote to two years of next-to-no live music and, dare I say it, the self-pity which seems to have enveloped many of our own artists of late.

The release date is June 3rd, 2022 on ChoVan Records, their own indie label.

A new video will be released in a few weeks.