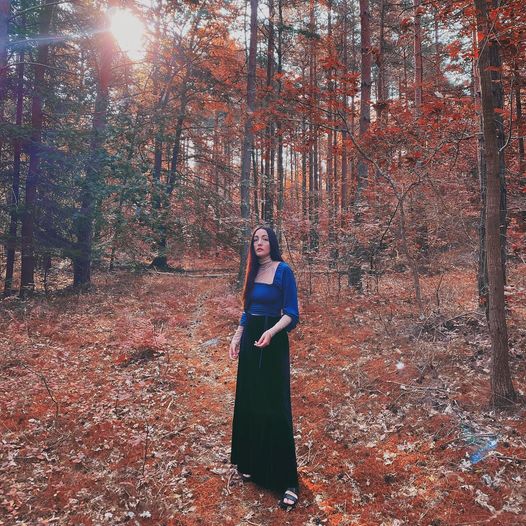 Brimheim (Helena Heinesen Rebensdorff), a lady with possibly the most doleful eyes I’ve seen, is the second Faroe Islander we’ve featured although she doesn’t live there now, having moved to Copenhagen and then across the Øresund Bridge to Malmö in southern Sweden.

I came across her back in April, with an extraordinary single, ‘Call it what you want,’ in which she invoked imagery of cop sirens on New York’s Fifth Avenue while she lay in bed fretting about what her partner’s out of town mother would think if she found her wrapped around her daughter, insisting “You and I will not be broken by your mother’s broken heart.”

Since then she’s put out another single, this time the dark, gothic ‘poison fizzing on a tongue‘ which, like this new one, ‘hey amanda’ (she seems to have a preference for lower case), will feature on her debut album ‘can’t hate myself into a different shape’ – which will be out on January 28th.

‘hey amanda’ seems to mark a change of direction, it’s more of a traditional pop song, and concerns friendship, nostalgia and a love letter to “my best pal since the 5th grade.”

She describes it as “an ode to friendship in all its bittersweet glory, a celebration of platonic love”, adding, “obviously there are plenty of great romantic love songs, but for some reason there aren’t a lot of love songs about friendships, even though they’re often just as crucial and formative as any crush or relationship.”

She’s not the first to go there of course, that was part of the message of ‘Wannabe’ but I’m minded more of Fiona Apple’s ‘Shameika’ from her 2020 Grammy-winning album ‘Fetch the Bolt Cutters.’ That too was a ‘love letter’ to a girl, Shameika Stepney, in the next school grade up from 10-year old Apple who was being bullied. Her words of encouragement to Apple were simple but effective: “Hey, why do you care about them? You have potential”. Words that were never forgotten and a firm friendship reunited many years later.

(And of course it was only two years later that Apple was brutally raped on her way home from school, causing her all sorts of subsequent problems some of which persist to this day. Shameika’s wise words doubtless helped her get through that, as well).

It appears that Amanda became friends with Brimheim when they were about the same age – 10 – and remain friends.

I only mention this because the first time I heard ‘Call it what you want,’ I knew straight away that Brimheim has the capability to write to Apple’s level if she puts her mind to it.

Musically, ‘hey amanda’ is a gentle, intimate, melodic song, and heartfelt. Lyrically, it intrigues me. Twice in the chorus are the lines:

That got me thinking about ‘Call it what you want,’ and I found myself wondering if Amanda is the same girl as the one in New York. But nah, that’s probably over-thinking it. And in any case a little research tells me that isn’t her partner’s name anyway.

What I know for sure is that I thought that song was UK chart material and I’ll say the same about this one. There is a ready market here for expressive queer pop, with no-one really cornering the market currently in the alt-pop domain, let alone mom-goth and soft grunge as she styles herself. Calvi is more of a rocker, a Bowie/Mercury type. Perhaps Arlo Parks or Dodie.  Whatever, there’s still a gap to be filled by a foreigner. She needs to work fast before Girl in Red fills it.

‘Brimheim’ pays homage to her Faroese roots, translating to ‘home of the breaking waves’. Well our tide has gone out Helena, so you can tsunami your way in whenever you want to…

‘can’t hate myself into a different shape’ is available on 28th January via W.A.S Entertainment.

It looks as if a Danish tour is planned for next year, Mr Omicron permitting, but not elsewhere.

Instagram: https://www.instagram.com/brimheim/ She seems to have dumped her website, which is a shame; it was a sight to behold.