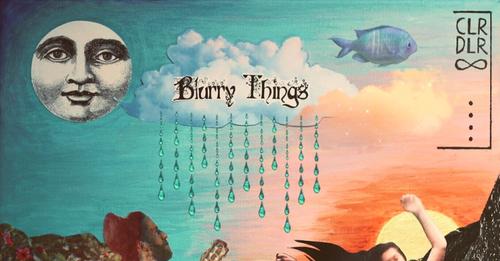 There’s nothing blurry about Color Dolor’s past achievements, particularly the Finnish Teosto Prize win (roughly equivalent to the Mercury Prize in the UK although it’s awarded to “bold, original and innovative musical works”, you can’t always say that about the Mercury) for their previous album, ‘Love’ in 2018. That set a high bar for this follow up, their fourth full-length. Can they reach that standard again?

The duo, Stina Koistinen and Leissi, say the record was a culmination of spontaneous ideas, eschewing over-production and over-thinking, even not rehearsing. “Demo like” as they describe it. It was labelled ‘Blurry Things’ early on and that was carried throughout. They add that “Most things in our world are blurry.” Time to lay off the G&Ts, Stina?

And I have to concur that it has a raw feel to it. Not an imperfect one, as if mistakes had been made and not rectified, but one suggestive of a band ‘going back to its roots’. They’re in good company. One band, another duo, springs readily to mind for doing this sort of thing, namely the Icelandic/Luxembourg combo that is When ‘Airy met Fairy, who even record in an empty apartment with the furniture removed, and they always make a good fist of their stripped back songs.

But when you’re as skilled and inventive as Color Dolor even stripped back under-production can be as comprehensive as a Phil Spector or Trevor Horn fabricated work, such is their mastery of instrument selection and how to match those instruments meaningfully.

It’s been said that I’ve ‘deep dived’ with Color Dolor reviews (including three of the songs on the album) so I’ll match them with a scaled down, demo-like review here!

It’s a cornucopia of delights, bouncing up and down the tempo ladder from beginning to end with a central theme which appears to be escapism, by way of underwater chambers, moonbeams, winged flight and Lord knows what else.

The styles employed are so diverse that you could easily believe this was someone’s Spotify playlist of 11 tracks from different artists.

That variation is immense, ranging across the ballady dream pop of ‘Moon in my room’; the pure pop of ‘Andrea’, which could have been lifted from Top of the Pops, 1991, hosted by Bruno Brookes and Gary Davies; and the trip-hoppy ‘It’s okay’, which Massive Attack would have been proud of.

Then there’s the campfire folk of ‘The Void’ with the simplest middle eight-cum-outro you’ll hear this year; the pop/rock fusion which is ‘Dream of you’ in which Stina sounds like Diana Ross when her voice isn’t being distorted; and the pedantic, snail-paced piano chords of the ironically-titled ‘Sudden change’.

There’s experimentation a-plenty in the title track, ‘Blurry Things’ which opens with what sounds like a radio broadcast in Lithuanian announcing the launch of Sputnik 1 followed by haunting piano and vocals over flamenco style guitar and a variety of studio-produced noises. I think there might even be a theremin in there.

And there’s the indecipherable track, the one which you can’t decide – is it filler or deeply meaningful and you haven’t ‘got it’? This one is the short instrumental ‘Pulpy’, a title which sounds like it belongs on a Pom Poko album.

Powerful synths inhabit many of the songs. They orchestrate the tuneful acoustic guitar-led pop ballad. ‘Shy’, and occur as overlapping waves (what else?) in ‘Underwater’. They seem to hang in space in ‘Andrea’.

But as if to prove they aren’t wedded to synthesisers one of the most impressive instrumental parts is a hugely reverbed guitar contribution on ‘Free as a bird’, which vies equally for your attention with a striking vocal outro, while ‘Moon in my room’ throws in an entirely unexpected trumpet solo as the outro.

Speaking of the vocals, readers may know already that Stina Koistinen can do no wrong in my book. Stina’s vocal range can be operatic in intensity, ethereal, lullaby gentle, even ‘little girl lost’ and anywhere in between. On this album there are several songs where she’s been multi-tracked, as a whisper (‘Moon in my room’), stridently (‘Free as a Bird’) or even in full-on 10cc mode (‘Sudden Change’).

Sometimes an album will ‘tell a story’ much better than any of the individual tracks do. They all come together to convey a message even if that message if vague and, well, blurry. Methinks it’s up to you to bring your own clarity as to what it’s about.

But they do give you some help. ‘Blurry things’ is atmospheric, art-pop in its truest sense – each track capable of painting a colourful picture in your mind as if you’ve suddenly developed synesthesia.

At one and the same time it offers frailty, power and marvellous inventiveness, a rare combination.

Blurry Things arrives via the Soliti label on 26th November 2021.