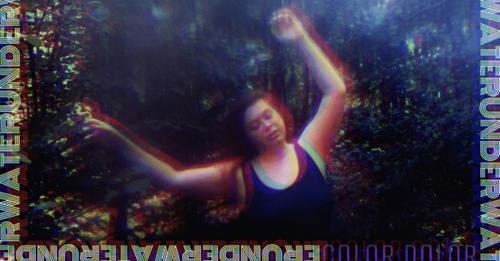 Color Dolor (Nicolas ‘Leissi’ Rehn and Stina Koistinen) have been off the scene for a while, in fact since their 2018 Teosto prize winning album ‘LOVE’, but they have separate interests as well with Nicolas working with Jesse Markin and Yona – both acts recently having chart success in Finland – while Stina released her debut album, ‘Ikuisuus’ from her solo project ‘Stinako’, which got a Hyundai Nordic Music Prize nomination. She also recorded the emotionally riveting ‘Swan/Koistinen EP’ with Astrid Swan.

And I hear she’s working on new Stinako material, too.

It wasn’t that long ago they released the first Color Dolor single since 2018, ‘Shy’, a song about “being too shy to approach a crush or some interesting person.” It’s a fair cop, I’m one of those, having myself completely run out of words and dried up like the Sahara when encountering a well-known musician unexpectedly in an airport terminal or on the street.

It was accompanied by a video, apparently shot in some obscure corner of Helsinki, in a glass bandstand or upmarket bus shelter during which a lovelorn Stina is visited by the ‘Laserskater’, apparently a well-known roller skater around town who could pass for Elton John, but she can only ‘touch him’ through the glass as if he’s the humanoid in ‘The Shape of Water’.

While the video was pleasantly weird I remarked at the time that it was a fairly mainstream subject for a band that has worked at the cutting edge of indie pop for quite a few years now, then I realised that while the vibe is positive and the melody strong it isn’t really upbeat and there is a hint of sadness lurking in it if you care to find it.

With this latest release I have to conclude that their style continues to shift away a little from the abstract which I remember in some of their earlier work. Retaining the H2O theme, the singer, Stina, is thrust ‘Underwater’ here, metaphorically speaking at least, where everything is ‘softer’ and ‘lighter’ but where she concedes that “This shit ain’t good for me, Diving down deeper in the sea”.

No explanation is offered as to what it is about but the opening lines, “Sometimes all I want is to be inside/a room that keeps everybody outside/I don’t know how many times I’ve been here” suggest an allegorical subacqueous panic room which has become an unacceptable alternative to facing reality. That might be nonsense, but I’ll stick with the interpretation until I’m told otherwise! I suppose in a way it continues the theme of ‘Shy’ to another level.

Musically, it’s a strident electronic pop-ballad underscored by a bass line which might be out of the Peter Hook song book while vocally Stina, who I usually associate with less playful styles, employs a whispered delivery that I haven’t encountered previously and whichis a revelation.

The autumn is coming and with it Color Dolor’s leaves are changing. They’re constantly evolving and it will be fascinating to see what the full album brings. ‘Blurry Things’ is coming out on 26th November 2021.