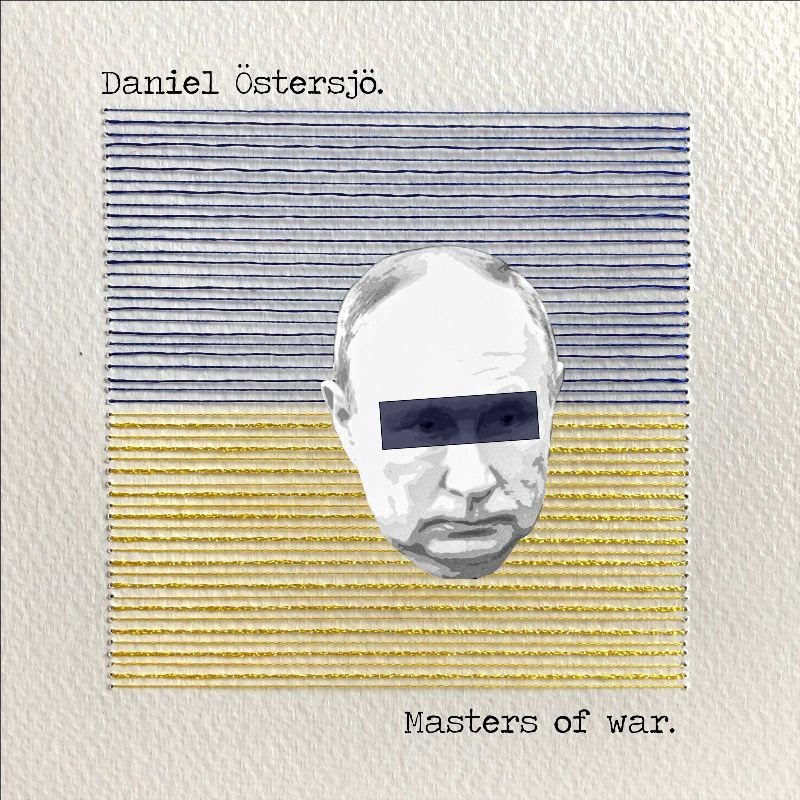 A couple of weeks ago we reported on the re-marketing of a song, ‘Putin will teach you to love the Motherland’ which was originally recorded as an adapted cover of a Pussy Riot song three years ago by The Pillisnorks and a 40+ strong collective, the Free Voices of Indie Sweden.

The initial intention of that song was to support two members of Russian protest group Pussy Riot who were seeking asylum in Sweden. The re-marketing of it is intended as a blunt anti-war statement following the Russian invasion of Ukraine.

Now,  as the war, oh, sorry, ‘special military operation’, enters its third week with thousands of civilians dead, hospitals bombed and hundreds reported to be trapped in the ruins of a theatre while a battle rages around them, and MadVlad® threatens a nuclear holocaust, another song has emerged out of Central Sweden expressing abhorrence at the continuing bloodshed.

This one, a cover of a Bob Dylan song, ‘Masters of War,’ comes from the unlikeliest of sources, namely, Daniel Östersjö, one half of the duo Le Lac Long 814, the gentle troubadours who have featured several times in NMC and who typically write and sing cultured chansons françaises.

Not today, mon ami. Cette fois, M. Östersjö reveals a tougher, grittier side as he spits out the Dylan piece with venom even the Duluth boy would be hard pressed to match.

Daniel Östersjö took part in a demonstration against the Ukraine war in Gävle in Central Sweden on 28th February where he chose to play his interpretation of Bob Dylan’s iconic anti-war song and in support of the global organisation UN Refugee Agency (UNHCR).

Now it is released by the Stockholm-based music label COMEDIA and has quickly picked up airplay on Swedish national radio.

He says, “I wanted to sing something that expresses what many people feel right now about Putin and his war in Ukraine.” On the recording he sings, and plays guitar, bass, organ, and viola.

For those not in the know about the history of the song, Dylan was a pacifist as well as a protest singer. He borrowed the melody to ‘Masters of War’ from an old American folk tune but bestowed on it an irresistible message.

Dylan’s song, ironically emerging from the fear of a nuclear war that we all thought was confined to history now, was recorded in 1963, one year after the Cuban Missile Crisis and the year in which John F Kennedy was assassinated, and included on the classic album ‘The Freewheeling Bob Dylan’.

Dylan later said he doesn’t like to sing songs that are so openly violent, and he didn’t perform it in public for a long time, a rare exception being a protest against the first Gulf War when the USA invaded Iraq, when he sang it with his band at the Grammy Award ceremony in 1991 on the occasion he was honoured with a Lifetime Achievement Award. The Hiroshima concert in Japan in 1994 was another such occasion, the first time in 30 years that Dylan performed the song solo.

Dylan’s lyrics are more telling than ever.

“You fasten all the triggers/For the others to fire

You hide in your mansion/As young people’s blood

Flows out of their bodies/And is buried in the mud”

That even Jesus would never/Forgive what you do.”

That final line gains greater poignancy after the atheist Putin addressed his ‘stadium audience’ in Moscow quoting from the Bible (John 15: 13 to be precise). “Greater love has no one than this: to lay down one’s life for one’s friends.” Go right ahead Vlad, make our day.

I’ve listened to the song several times now and I have to say, hand on heart, that this could be, and should be, a classic. Daniel Östersjö evokes the spirit of Dylan as much as Volodymyr Zelenskyy evoked that of Churchill, in his speech to the British Parliament last week.

Had someone told me that a member of Le Lac Long 814 could produce something as powerful and grittily moving as this, I wouldn’t have believed it.

Congratulations to everyone concerned.

The album cover (the image here) consists of Anneli Östersjö’s paper embroidered Ukrainian flag, which right now is a part of her art exhibition Variable X in Sweden.

All production costs for the single have been donated to UNHCR for their work with Ukrainian refugees, from the artist Daniel Östersjö himself, from the mixing and mastering engineer Ruben Engzell at Studio Skutan (Ruben Engzell) and from the executive producer Claes Olson at COMEDIA.