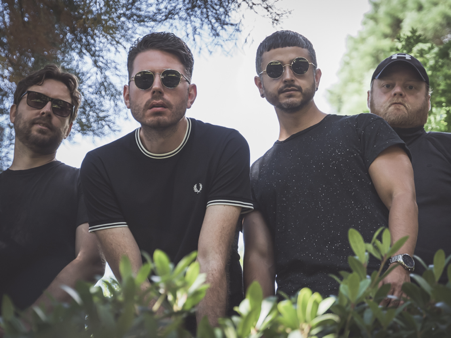 Britpop. Now there’s a reminiscence. A short-lived phenomenon of the mid-1990s. Cool Britannia. The second British invasion of America. Beer and crisps with smiley, nicey Tony at Number 10. Manchester vs. Essex. Liam vs. Damon in a punch up that never happened while all the time the coolest band of them all, Ocean Colour Scene, languished in relative obscurity in Buuur-mingham.

You thought it was all over bar the fighting, that those days were gone forever, but you’d be dead wrong our kid, d’you know what I mean? Here are European rockers DEAD STAR TALK with their new album ‘Too Many Too Much’, released on 18th February via Massive 92 Records and this is the title track.

The Copenhagen/Hamburg-based newcomers are a band made up of old friends and former band mates that were all active on the Copenhagen guitar-rock scene of the 00’s and the band’s main songwriter Christian Buhl was brought up on British guitar music and particularly the “glory days” of Britpop.

His band mates however, did not have the same connection to British music, rather to harder Danish and US styles so they’re something of a hybrid and that shows through in rougher production techniques on an album that was recorded in 10 days against the clock, “as if it was the last chance we’d ever get to play.”

There’s no hybridity on the title track though. You might have stepped into the Tardis and gone back with Doctor Who to 1995 for what is the sweetest piece of Britpop I’ve heard since, well, Britpop, with, seemingly, Noel, Liam and the lads jamming with OCS. If anyone ever wrote a documentary (or mockumentary) about that era, this would have to be the credits track.

There is variety on the album for sure, and some of the tracks are notably grittier. ‘Giant Child’ could be the spawn of The Stranglers and the Go-Go’s, while, conversely, ‘It’s you, euphoria’ channels The Cranberries in the opening bars. But then you have ‘Golden Boxes’ for which the guitar riff is ‘Wonderwall’ pure and simple, while that of ‘Don’t wait (while you’re still young) could pass for ‘She’s electric’.

If a trip down Memory Lane is your thing then check out this track, and the whole album. You’ll be “sor-ted.”

Find out more about them, including live dates, at: