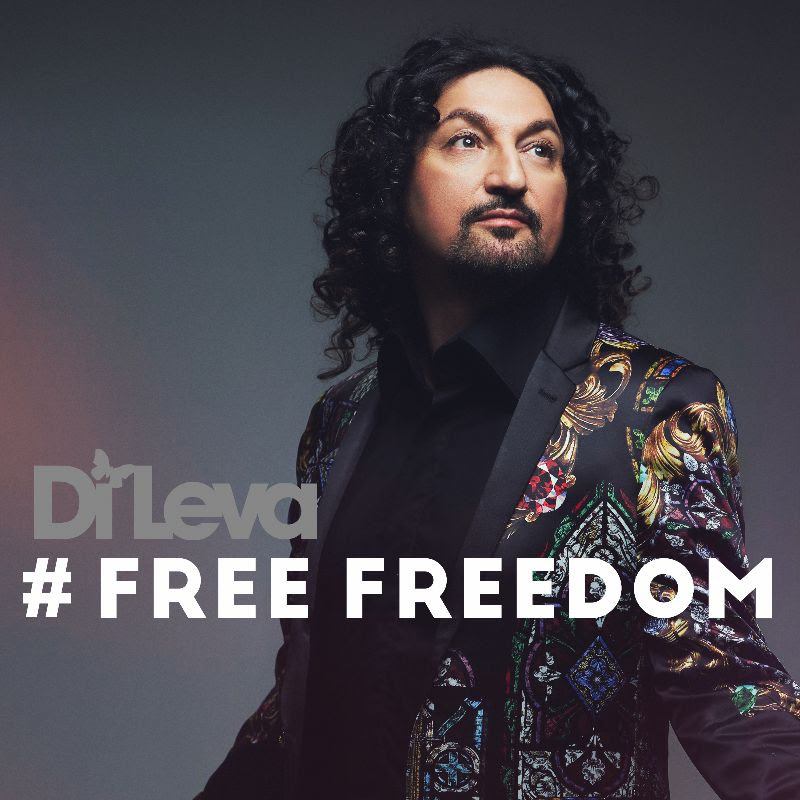 We’re a little late with this review owing to some technical problems with the website.

The last time Di Leva was in these pages was with his spectacular Bowie tribute (‘Heroes’) earlier this year.

Now he’s back with his new single ‘Free Freedom,’ symptomatic of his personal motif and another tribute of sorts, this time to ‘the invincible free will of our souls.’

‘Free Freedom’ is described as a space-pop song with a modern gospel feel; science-fiction pop culture for anyone who likes movies and TV series such as The X-Files, The Matrix, and Twin Peaks and is taken from Di Leva’s forthcoming concept album ‘The Hybrids’ which will be released in the autumn of 2022.

Thomas Di Leva has been a fixture on the Swedish scene almost since before the country had an empire, or it certainly feels that way. Apart from Bowie (see below), you could realistically compare him with, say, Cliff Richard in the UK. Presenting powerful melodic pop in a wholesome way but without it ever becoming cloying.

And that is exactly what this song is all about. Someone seems to shout out “hallelujah” in the opening seconds, after which the song rapidly escalates into a spiritual, happy-clappy sing-a-long that makes you think you’ve joined a Disney Parade down Main Street, with a rhythm that would keep Mickey, Donald, Goofy and Pluto on their toes all day long. And considerably more gospel than Thomas Anderson, Mulder & Scully or Laura Palmer I would venture.

There’s simply nothing you could possibly dislike about it. And that is why Di Leva is the megastar he is. Free Nelson Mandela, Free Willy, Free Freedom; they’re all cut from the same cloth.

To return briefly to the Bowie connection, following the release of the single , Di Leva will continue his sold-out concert hall tour with his critically acclaimed tribute show ‘Changes’ dedicated to David Bowie. The hit show, where Di Leva interprets Bowie from his heart and takes us on a journey through time and space, has taken on a life of its own and after having been played almost 100 times around the country, another 23 dates have now been added.

And that goes some way to explaining why Di Leva remains one of Sweden’s best-known and most popular artists.

The space-themed project ‘The Hybrids’ started at the ‘Storm Area 51 Basecamp Festival’ in Nevada, USA in 2019 when Di Leva had the world premiere for the music video ‘Men in Black’, his first single from the album. Always restless, Di Leva hopes to embark on a new international career on the strength of the album.