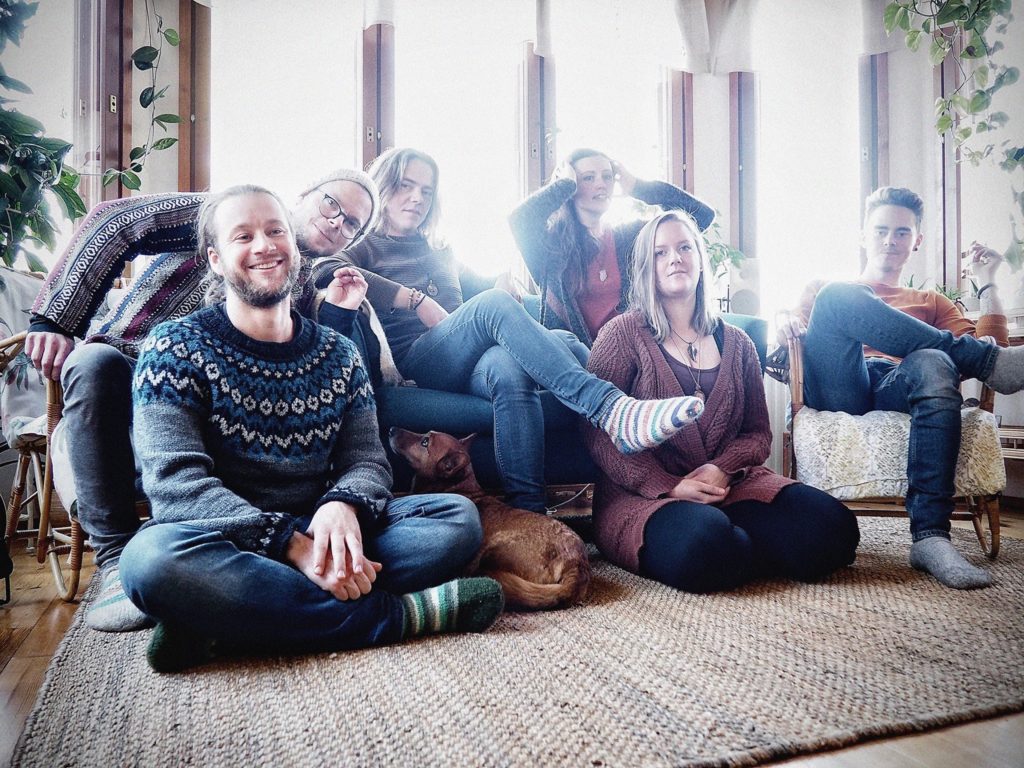 I’m learning Finnish one word at a time. Today’s is ‘Minnet’ which is Memory, or more precisely ‘In Memory’ in English and that’s to where I’ll have to commit it (it’s a hard language!)

Except that the translation is actually from Swedish, the language that the original version of the song was written in and there is a version in English also, which will be released om 10th December.

We’ve had quite a lot of prog-rock recently. Is it my imagination or is it making a comeback?

Dimma, with its six members, all close friends, is a progressive folk rock band from Parainen, Finland formed in 2015. They collectively have 15 years industry experience in numerous bands including the wonderfully named Uncle Ben’s pumped up Frisco. Dimma’s debut album, ‘Lead Me Far Beyond’, was released in the autumn of 2019.

Having said that about prog-rock they add that it is still hard to categorise themselves under a certain genre, or even combination of genres and that they embrace both progressive and psychedelic rock, also country, funk and heavy metal, as well as folk music.

Also that “we feel ourselves slowly gravitating closer to our roots; to the down-to-earth, mystical, Nordic, foresty feel of progressive folk rock (although always with a twist).” Moreover, there are both male and female lead vocals, while they “don’t shy away from an instrumental challenge”. Very Finnish.

Ok, having recently listened to fellow Finnish band Auri, who fit that description perfectly, I think I know what to expect.

‘Minnet’ is about keeping the memory of forefathers and -mothers alive by learning from both their wisdom and their challenges in life. It could be an episode of The Waltons.

The format of the song is unusual to say the least, and not at all like Auri; I called that one wrong. It varies between folk that is verging on barn dance and heavy anthemic rock (including the vocal) mixed with symphonic metal, each vying with the other for supremacy. Instrumentally you’ll find mandolin, electric guitar, a creative beat and violin all within the first 30 seconds or so.

It’s the sort of song that holds your attention because you’re never sure quite what to expect next. They know how to tell a story and exactly how long that story should last; it is neither too short to purvey the meaning, nor so long that it outstays its welcome.

And I’m often astonished at how good Nordic bands are at writing lyrics in English when that isn’t their native language. The original may have been in Swedish but this is no mere translation; it has cadence. A flow of its own.

I was particularly taken with this lyrical section from the chorus:

“Now my broken heart won’t answer/I may never comprehend/There’s nothing left to do/But live my life through you/Holding on to memories/Where you are beautiful and true.”

Nothing fancy. Straight to the point but thoughtful lyrics and standing in counterpoint to the rather more complex musical arrangement.

So, to the 64 thousand dollar question. Is there any prog rock in there? Well I heard some snatches I could relate to certain bands from the 1970s but essentially no. Indeed, as they say, it is no easy task to pigeonhole Dimma at all. They’ve cornered a little sub-genre of their own and we are all the beneficiaries of it.

All-in-all, a welcome introduction to a band that has a cachet of international potential.

The only tiny little criticism I would make is of the band’s name, assuming they have international ambitions. Dimma doesn’t translate into anything in English. But it doesn’t resonate. It’s a word that stimulates negative contextual comparisons, like ‘dumber’.

A couple of examples. When I worked for Icelandair the business class cabin was called (and probably still is) ‘Saga Class’. It referred to the Icelandic Sagas of course. But the British, being ignorant of Icelandic folklore, could think only of the company Saga, which sells insurance to older people. They thought they’d be crossing the Atlantic in a cabin full of geriatrics.

A few years ago I read in a magazine an article penned by a company called Interbrand, which, as the title suggests, ‘brands’ merchandise. The article was about how not to give a name to a product which translates badly into English. The first example was Pis Lager, from Germany or Belgium I think, which nobody in Britain would drink, for obvious reasons!

The second was a brand of cream cracker (light biscuit) called Nora Knackers. Nora is a female name no longer used in the UK and it personifies a certain type of simple working woman such as the character called Nora Batty in the world’s longest-running TV sit-com, ‘Last of the Summer Wine.’ Knackers, quite simply, is slang for what hangs between a man’s legs. Nora Knackers was not a success in the UK.

I’ve rambled on a bit and I hope the band won’t be annoyed by those comments, which are well intentioned.

The song is great.