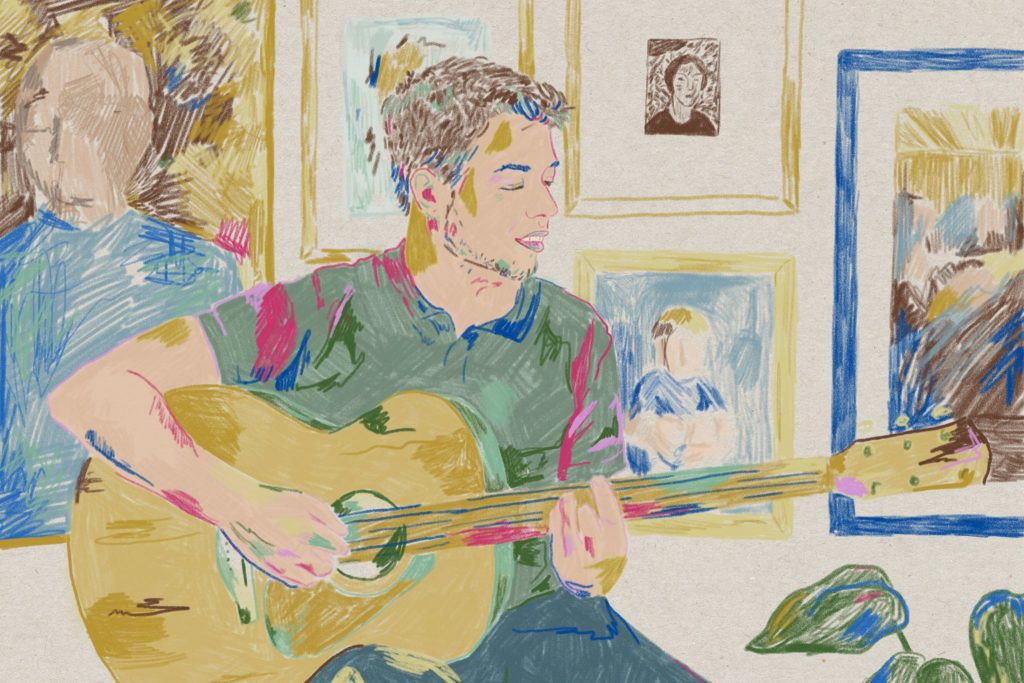 The Press Release tells me that Eyði Horsdal is an up-and-coming Faroese songwriter and artist “exploring simplicity in song writing.” He’s certainly done that in what must be one of the most uncomplicated, unpretentious and engaging releases of the year.

He is a native of the Faroe Islands and learned his trade by listening and playing along to his favourite records by, inter alia, Paul Simon and Leonard Cohen, and the influence of both can be heard in this song, ‘Old Friends’, which is the second track from his debut album ‘Songs with Eva’ which is scheduled for release in March 2023.

Eva by the way is British songwriter Eva Perrin Fontana, who also co-wrote this song, possibly with the emphasis on the lyrics. (She bills herself online as “a girl who talks too much and still somehow has words to spare for songs”).

He says, “Loneliness meets adoration – reminiscing at night time, ’Old Friends’ is about the true gift of life – friends. A moment captured live in a room with a fireplace – in the countryside – with the windows open – bringing drama to the simple song.”

To be honest it is the sort of song that would have gone down even better during one of the many pandemic lockdowns. I assume they had those in the Faroes as well. Reminiscing about old friends you haven’t seen for a while…and aren’t likely to any time soon either.

And yet it’s optimistic in tone at the same time with charmingly whimsical lyrics about “mistaking the leaves for stars” while “the Moon covers its bashful smiles.”

It could, just could, become a little too syrupy but the extended intervention of a cameo from Eva which lasts until the end of the song comes just at the right time. Their voices complement each other very well. She’s Kate Bush to Eyði’s Peter Gabriel, a garden taking the place of the flowing river.

We are promised more of the same on the album with “relatable and charmingly melodic songs with a timelessness, yet present and fleetingly momentary at once.”

‘Songs with Eva is out in March 2023 on vinyl and digitally via Tutl Records.