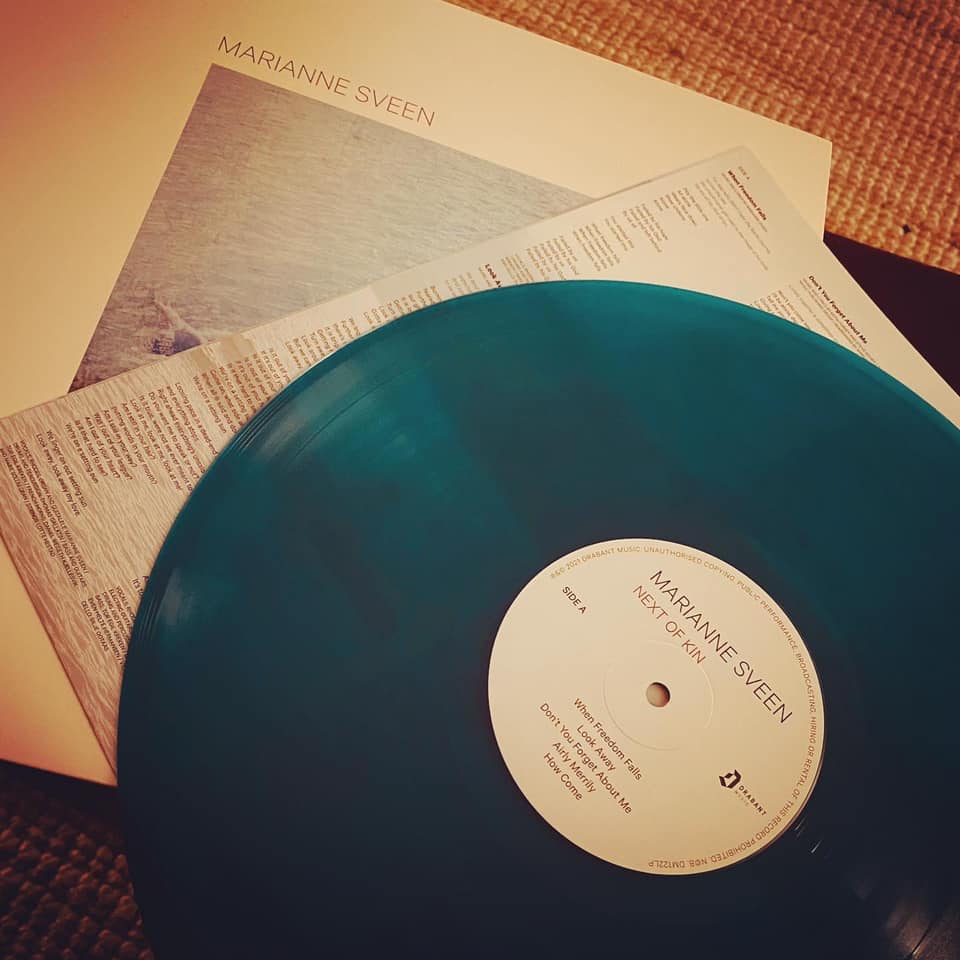 So pleased to welcome Marianne Sveen to the third in this ‘Musical Feast’ series in which invited participants select five songs, or albums, or music videos (their choice, including mixing the mediums up if they prefer) and tell us in a few words why they mean so much to them.

We’re back in Oslo for this one, the home to Marianne and her family. If you don’t know of her she is still probably best known for her unforgettable vocal and instrumental (keys, guitar, banjo, balalaika, drums) performances for the great all-female Katzenjammer band between 2005 and 2016.

At least for now, that is. Marianne left Katzenjammer partly because she knew she had an album of her own in her but she thought she would never be able to write and record it ‘part time’ as a side project. Unfortunately, emerging personal circumstances meant it then took almost six years to complete, being released at the end of 2021.

I was so bowled over by that album, ‘Next of Kin’ that I just had to give it 9/10 and eventually voted it my ‘Album of the Year’. I know Marianne was a little taken aback by ‘Next of Kin’ being so highly rated but I always measure very highly artists who write, play and sing from the heart, displaying their emotions without playing on them, and she does that par excellence. As much as I do those who are able to sweep their past away, tackle new (and generally more serious) subjects with a blank canvas and a novel musical interpretation and come up with the goods, which, again she achieved impressively.

But I won’t bang on about it any longer because this series is about what inspires the artist, rather than what inspires me and Marianne has made a very broad eclectic selection here, ranging from Aretha Franklin to Radiohead to Nik Kershaw, to The Beatles and to an obscure film soundtrack that few will have heard of and which makes her “weep like a baby”.

Marianne introduces her selection as ‘Five songs that have travelled with me throughout the years’, adding, “An impossible task, off course…500 would be easier…But here are five that are still with me, and probably always will be.”

The songs that tend to stay with me for the longest, and maybe for life, are the ones that continuously move me in different ways, and that I never turn off no matter what mood I’m in.

Radiohead has quite a few of these, and I could have picked any of them. But ‘Pyramid Song’ gets me every time. The Major/Minor orientation and the beat that just goes round and round, together with the haunting string arrangements, turn this song into a magnet. A place I never want to leave.

Growing up in the 80’s, there was a lot of crap one had to listen to. I remember my taste in music was quite different from a lot of my classmates. But I definitely appreciated a good pop-song. As long as it felt interesting or catchy on a heart and soul level.

‘The Riddle’ is a weird pop song. I have always loved the chord progressions in this song, and the upward moving chorus. I have never bothered with getting in to the lyrics on this song. Maybe I should’ve 🙂

This has always been one of my favourite Beatles songs. One of the things that inspire me as a songwriter is music that gives me the feeling that whoever wrote the song didn’t think too much while they were writing it. Going with their gut, adding all sorts of craziness just because it makes sense right then and there. It kind of gives me the feeling I’m there with them in the creative process. I might be completely off here, but this is at least the feeling it gives me. And that’s what I love about it. The clever ugliness. The liberating craziness.

This one hasn’t been around in my life for that long, but it represents something that has a huge place in my musical – and also human – heart.

I postponed watching it, because I was afraid it would mess up my relationship with this soundtrack. Fortunately, it didn’t. Though I do think the music is better than the movie.

This is what I aim for with my own music. Create spaces that lure out emotions you didn’t know you had, or maybe helps you reflect on something that may have weighed on you for a while.

I listen to this track when I walk in the mountains. And it gets me EVERY time. I weep like a baby. And feel like I have been to therapy afterwards 🙂

Until you come back to me (Aretha Franklin)

I wish I lived in a time where there was no auto-tune, and the singer put the soul on his or her sleeve and their entire soul on display when they wrote, recorded, released and performed music. Authentic, heartfelt imperfection.

It´s not that it doesn’t exist anymore. It just seems like there is not as much room for it. It feels harder to come by. I might be getting old. Or just not very well versed in today’s music. But I know I’m not alone when I say that the technology and all the options we have for over-editing until perfection and there’s no authenticity left has taken its toll on modern music.

Just listen to Aretha’s performance on this song, round 3:02 – There’s no way she planned that playful twist right there. She felt that; she didn’t think it. In all modesty, I’m positive.

A fascinating selection here from Marianne and one that perhaps hints a little at how her own songs are created. “Going with the gut”, “Create spaces that lure out emotions” and “She felt that; she didn’t think it” are three phrases that leap out at me in that respect.

Thanks again to Marianne for being such a good sport and participating in this feature at what must be a busy time for her. (And for doing the reviewing job better than I can). I learned today that her album release show for ‘Next of Kin’ may be delayed a few months due to the ravages of you-know-what in Norway. I’m not sure if it is an industry event or a public one but when it does happen if you are able to get there make sure you do.

We have another Oslo-pudlian lined up for the next in this series. Watch this space.