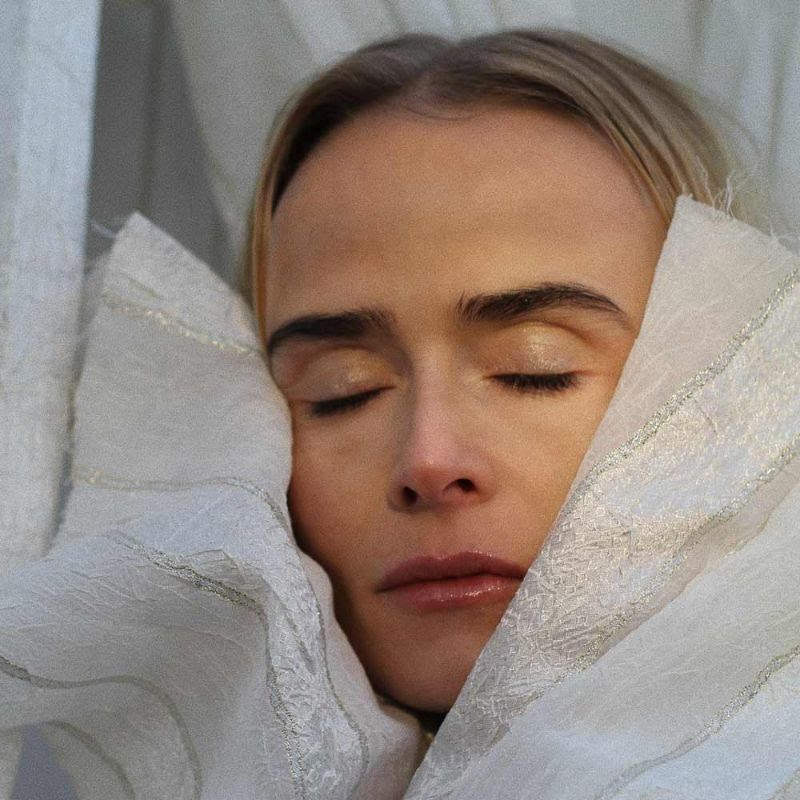 A second appearance in NMC for Faroese Frum (Jenný Augustudóttir Kragesteen) after her rather excellent ‘Tumbled’ last October. Now resident in Iceland I believe (the equivalent of moving to London or New York I suppose) she brings some of the weirdness of both her homeland and her adopted domicile to the recording studio, but in the nicest possible way.

There has been a Faroese Nordic Noir TV drama since her last single, called ‘Tron;’ you might have seen it. It related the (fictional) first murder in the islands for 50 years. Don’t all rush there at once.

It exposed the bleak beauty of those remote craggy islands and their inherent mystery; something that emanates equally from their musicians, of whom Eivør, Lena Anderssen and Brimheim in particular spring readily to mind as well as Frum.

So mysterious in fact, that in her promotional photo for this song she could be dead. Hopefully she’s just sleeping.

The photo goes some way towards relating the storyline. “The song is about finally being in the place you have been longing for, for a long time, but then realising that it doesn’t feel so good and peaceful as you imagined, and you just wanna run away,” she says.

There are a couple of interesting lines which drive the point:

“Everything, everything I wanted/Now I have, and I just feel so hunted.”

I guess that’s how lottery winners must feel once the initial euphoria has worn off and the first begging letter/email/text/WhatsApp arrives, along with the realisation that it is the new norm, for now and forever.

One thing I noticed in ‘Tumbled’ is her propensity to create odd rhythms. They’re back again here, over a waltz-like tune and supplemented by little trap beats and she’s somehow managed to conjure up and intertwine sonic themes that might have African and Middle Eastern origins while never letting go of a strong western melody line.

Which just leaves her vocal, which is so seductive she should be a hypnotherapist.

As with all of Frum’s work there’s a lot going on and you’ll need to listen to ‘Run’ a few times to take it all in.

Incidentally, I’ve often wondered about her artist moniker. There is no translation of Frum from Faroese or Danish. In Icelandic it means ‘primary.’ Or, and this is interesting, Frum is a word that describes Jewish religious devotion and can also be used in a negative sense for ‘hypocritically pious.’ I haven’t figured out the connection yet if there is one, but I’m working on it.