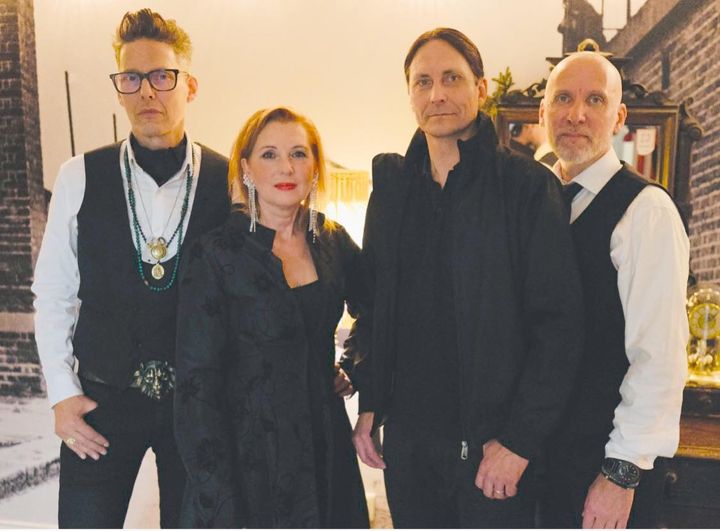 Gipsy Power were here only a few weeks ago but I’m glad to have them back on account of a couple of things in particular. Firstly, because they’ve got an album out now. And secondly because of something I’ve only just learned about the main man, Steven Kautzky Andersson.

It seems that in his early twenties, Steven was discovered by Guitar World Magazine’s talent scout and record producer Mike Varney, who hailed his talent in the magazine, his mix of progressive rock with influences of classical music, folk, and oriental music (exactly what I’m looking for), and at the age of 22 he made his debut as a recording artist with the Swedish Grammy-nominated album ‘Steven Anderson ́s Gipsy Power’. Steven was hailed as a new Swedish guitar hero and achieved substantial international success, especially in Japan where he established a loyal fan base.

Unfortunately, he then damaged his arm and had to lay off guitar playing…for 10 years. Then he picked it up again, with a different style, touring Asia extensively.

The album track/single we hosted back in October, on only the second day of our existence, was ‘Holy water’, which gave us a blessing and which I described as being like a lost, just discovered track on which Hendrix was joined by Janis Joplin; and I’ve mentioned Hendrix previously in respect of another album track I’d reviewed in a previous life, a reworked version of Jimi’s ‘Little Wing.’

Is he really that good, to prompt such a comparison? There’s only one way to find out.

I selected the third track randomly, on the strength of the title. ‘Magnetica Psychedelica’, which conveniently segues into ‘Holy Water’. It may be only 42 seconds long buthow evocative of a bygone era can you get? Is it another Hendrix track? Sounds as if it could be. I thought he was going to start playing The Star Spangled Banner.

Then as it merges into ‘Holy Water’ I began to hear things I hadn’t previously. it’s as if he’s run the rule here over some the great guitarists of the 1970s, starting with Hendrix and then channelling the likes of Jimmy Page, Steve Howe and Steve Hackett (complete with the ‘tapping’ technique, it sounds like) while managing to convince you he’s all of them and none of them.

Guitar isn’t my first choice instrument, I always opted for the keyboards first but I could listen to this tour de force all night. I reckon I’ve probably earned him a krona in streaming royalties already. If your bag is 70s guitar rock then you’ve come home.

And if that wasn’t enough you’ve got Ulrika shrieking away in the background like Janis at Monterey Pop.

Glancing through this track list there are even more enticing track titles, like ‘I will rise’ and ‘Fire into my soul.’

The press release tells me that when Steven played at the Macau International Film Festival in China Jean-Claude Van Damme was so taken that he was seen playing air guitar and dancing ecstatically in front of the stage. Pardon me while I go and do my ‘Muscles from Brussels’ impression to this album.