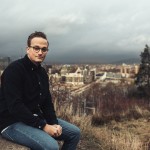 It’s a long way from South America to Norway’s North Sea west coast but at least one alpaca seems to have made the journey. This one is Grand Alpaca, a guitar-based singer-songwriter. I wasn’t initially aware of his actual name because I don’t know it but I was confident it wasn’t Orville Alpecka. Now I learn it is Alexander Hoddevik.

Having spent three years writing and honing his debut album I’m a little embarrassed only to be able to review one sample song from it and after a quick breeze through the album selected the opener, ‘Julia’. Not because it’s typical of the album, which seems largely to be written in minor keys.

‘Julia’ is more upbeat, despite it being a break-up song. Fundamentally, he doesn’t think he’s good enough for her. He’s loved her from the start but that love is getting colder and “falling like the stars that fade away”.

It’s typical folk/country fare, replete with the same degree of Americana as the Interstate 40 where it runs through Nashville and you could imagine Garth Brooks singing it during the CMA at the Grand Ole Opry. Not that Grand Alpaca has Brooks’ cultured tones of course (who does?) but he makes a pretty good fist of the vocal here while the song carries a chorus that sticks in the mind and an instrumental bridge that features the nearest thing to a slide guitar solo that I’ve heard.

And there are a couple of interesting lines in the lyrics that caught my attention. The first is “Melt me down and pour me back in the ocean”. Is that a closet environmental allusion I wondered, as in collapsing glaciers? It would be out of place in a love song but otherwise I can’t reconcile it.

The other is “Houses made out of sand never reach expiration/Here come the tidal waves”. That’s clever imagery.

Do check out this song. It doesn’t exactly exemplify the other tracks but it is a good introduction to the artist and will certainly prompt you to seek out more.

I see the album was produced in collaboration with the Norwegian indie legend Kenneth Ishak, whom we also featured recently and who has released an album of his own.

‘Staying quiet is an easy young thing to do’ was released on 3rd December, on all digital platforms in all territories as well as CD and vinyl.