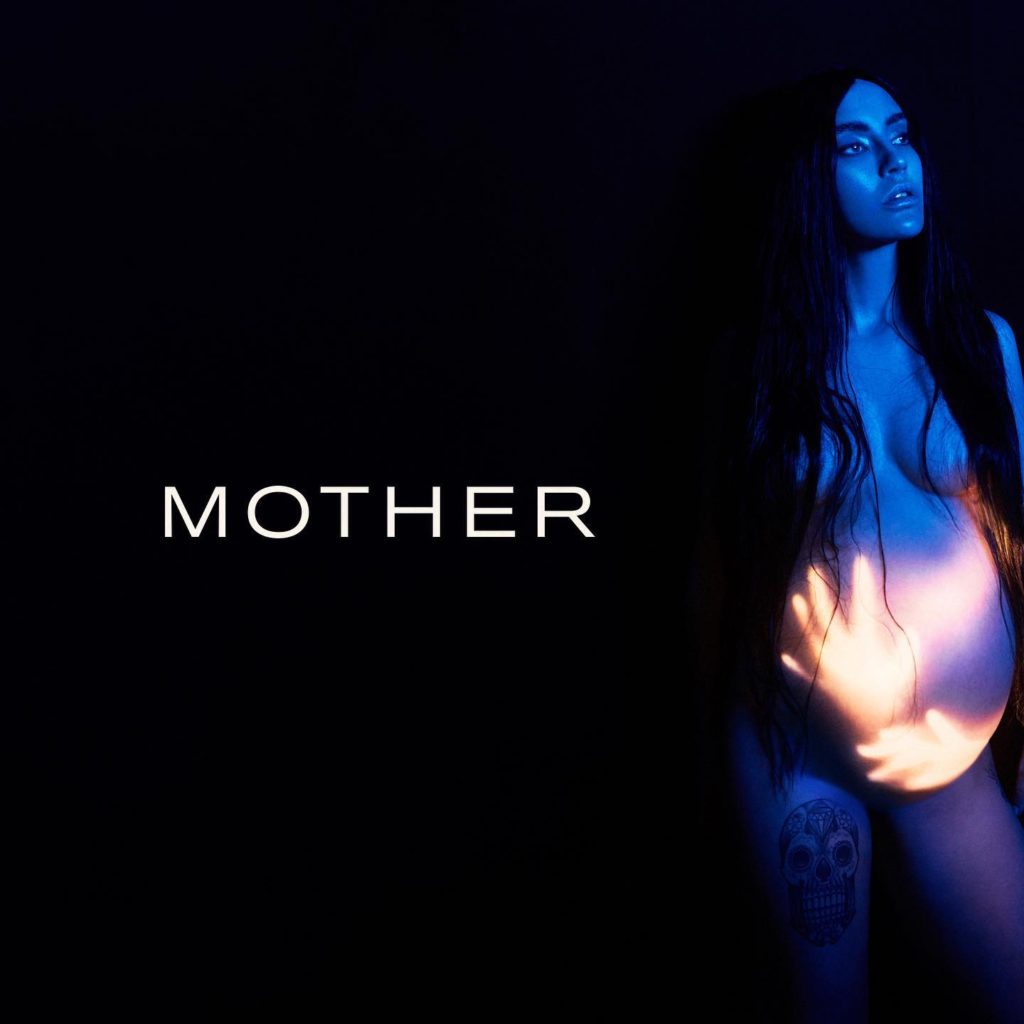 Ingrid Helene Håvik has come a long way since her early teenage years when she was influenced by the likes of The Prodigy and The Chemical Brothers while her classmates were dancing to ‘Wannabe’ by a group of English wannabes, and the latter’s inspiration in particular being evident by way of the incessant synth pad beats on many of the tracks on this fifth Highasakite album, ‘Mother’.

There’s something about the album’s title that suggests gentle, perhaps even lullaby-like songs throughout; delicate ballads to soothe little baby to sleep (and she has become a mother herself, twice over, in the last couple of years or so).

If that’s what you are expecting, you’re in for a shock.

There is something inherently dark and angst-ridden about Ingrid’s song writing and there always has been. Whatever happened to the guy who went missing one Wednesday eight years ago, and why did he? Why her obsession with being lifted by the hair and dragged down the stairs? Why consider herself a terrorist, a parasite, a hand grenade and why go to Iran, to go on a bender and befriend a married man, losing her hands in the process?  What thought patterns encourage the naming of songs after the site of the first Atomic Bomb attack and that of the world’s worst radioactive accident? What prompted her to write one about a notoriously intemperate US Marine Commander in Iraq?

And that darkness was even more evident on her 2014 solo album ‘Babylove’, forexample on the track ‘Marianna’, which has possibly the most shocking opening verse lyrics you will ever hear.

So we shouldn’t be surprised that gloom prevails in this album, too. She says, “The mother I’m writing about is less of a gentle caring ‘mommy’ presence and more like a tarantula, the mother ship, the destroyer and creator. That’s what ‘Mother’ is to me. It is a celebration of the macabre.”

But as is so often the case with Ingrid there’s much more to it than that. Let’s consider the musicianship first, the tunes.

‘I just moved here’ is a playful ballad which morphs into an upbeat pop banger very much along the lines of, say, ‘Mexico’ from the ‘Uranium Heart’ album, before inexplicably wandering off into an electronic instrumental black hole.

Title track ‘Mother’ has a wonderful catchy and sustained melody right from the start, reinforced by striking, explosive synths. If the Spotify rule of thumb is to make your mark in six seconds or less before the listener gets bored and shuffles on then it certainly ticks all the boxes and the addition of an anthemic ‘Hey! Hey! Hey! Hey!’ after the six key words ‘I need to call my mother’ each time is a masterstroke.

‘Atomic Sparks’ follows a similar format to ‘5 Million Miles’, the 2017 Stargate-produced single that was dropped on an unsuspecting, post- ‘Camp Echo’, public as the first tangible example of the mass market pop song that Ingrid could write if she chose to. It is equally as resplendent, perhaps even more so, in its sparkling melody line.

‘Keep it alive’ manages, after an Abba-like opening, to combine an enthralling electronic anthem with the sort of soft piano chords you’d associate with a Beatles ballad in the bridge and as it plays out. I wish I could offer ‘Norwegian Wood’ as an example, it would be apposite, but there are better ones; ‘The Fool on the Hill’ perhaps.

‘Under the same sky’ is a short track, heavily synthesised while Ingrid’s vocal is equally heavily modified, by way of a vocoder or whatever and the structure follows the format of several of the heavier ‘Camp Echo’ tracks. If the intention here is to create imagery of the world being a small place now, where communication of different varieties ensures that no-one is isolated from another person even if they think they are (as the lyrics suggest to me) then it works perfectly. It would suit the scene in the Jodie Foster film ‘Contact’ where the Foster character is apparently reunited with her dead father on another planet.

‘Love him anyway’ was the first single released I believe, as a “catchy radio number” and it’s easy to hear why. Another pop banger, almost in the Eurovision Song Contest category by Highasakite’s standards (and another where the opening bars could have been written by Benny and Björn), and this one reinforced by some funky percussion from Trond Bersu.

‘Tell her yourself’ couldn’t be more different. A track dominated by electronic and symphonic experimentation with the percussion exploding like a thunderstorm and yet with a laid-back bluesy feel to it in the vocal.

‘So cold’ has probably the catchiest riff on the album and progresses so quickly it’s as if Ingrid is running flat out to keep warm. Crucially it has the flavour of a dance track and it is of little surprise that it precedes the penultimate track ‘Autopsy’ which is really two songs in one and, at 10 minutes probably the longest they have ever written.

The catalyst for ‘Autopsy’ is a large room, possibly a club, from which emanate the sights and sounds of a rave party, together with a lone female voice, possibly Ingrid’s, speaking quietly of anxiety and persecution paranoia.

The first part is delivered initially in a ‘Camp Echo’-style, a sort of amalgam of ‘My mind is a bad neighbourhood’ (the mad Marine song) and ‘Someone who’ll get it’.

Then at about four minutes in it shifts suddenly into industrial EDM territory, verging on trance, with only Ingrid’s occasional, far away plaintive voice for company and you might have strayed into Berlin’s Berghain or Amnesia in Ibiza in its heyday. ‘Breaking new ground’ doesn’t come close to describing it.

Now, I’m no expert on EDM/IDM but this is one of the most powerful dance tracks I’ve heard in ages. Just when you think it can’t get any more intense it does just that and by all accounts it could have gone on for another 10 minutes had they not curtailed it. I reckon it should be earmarked for a summer release in 2022, in a disco-edited format.

And I imagine it will be awesome if they choose to play it live.

They’ve invented a new genre with the final track, ‘Can I Come Home’; Symphonic Indie Pop. Hand on heart this is quite possibly the most powerful song they’ve ever written, a monumental anthem featuring piano, violin-like synths, many real violins, a terrific vocal contribution from Ingrid in a pleading voice the likes of which I haven’t heard since ‘God don’t leave me’ and some masterful orchestral percussion from Trond Bersu, who can say more with a few well-timed strokes than most drummers do in a five-minute solo. Pardon me for repeating a well worn cliché of mine but if this song doesn’t give you goose bumps then they must be on strike. A stunningly epic piece played out by a full symphony orchestra, it carries as much gravitas and is every bit as ground breaking as A-ha’s ‘Take on me’ in the overall scheme of things in Norway and that’s saying something.

There is huge musical variety across this album, from ballad to techno to catchy pop to symphonic anthem. There’s tenderness but mainly there is a dark, melancholic grandeur.

Some tracks might have been accompanied by acoustic guitar rather than the ubiquitous synthesisers (and they have done that in the past as anyone who attended the ‘Uranium Heart’ tour will remember; Trond Bersu happily strumming away while prostrate on the floor) but hey-ho Highasakite is a synthesiser band (I once counted seven of them on stage shared between three players) and synth-focused music is what they do.

The only possible criticism I could offer is that while the production is state-of-the-art as one might expect of Scandinavia, it might be a little overproduced. The title track is a case in point. Trond Bersu (who I believe has produced the album, or at least most of it) has become the world champion of loud explosive synths and percussion, even what amounts to almost military hardware. It sounds periodically as if World War 3 has broken out and Ingrid’s vocal sometimes gets a little lost in the battle.

What is it all about? Your guess is as good as mine but there is a theme to it just as there was on earlier albums, such as domestic personal warfare, and international relations. Ingrid says it is an album “about birth and death, the cycle of renewal and destruction” and she references the title track specifically when she says the cry “I need to call my mother” indicates that as a grown woman with two kids, she had no other options left, her ‘options’ having been cause for consideration in several previous songs. In the past she has spoken about “my crash and burn personality” and in prior work she has felt the urge to invoke the Almighty himself to come to her aid.

The album does have a ‘concept’ feel to it, of a journey, a loop that begins with ‘I just moved here’ and ends with ‘Can I come home’ and possibly carries on looping like that, Ingrid painting herself as a peripatetic figure, restless, unable to settle down, possibly forever, and subject to the wishes of others more than she is able to determine her own future.

If you can imagine an album in which the lyrics are written in minor keys this is it. It is only the first track which contains hopeful words, in the opening lines, but even they are dependent on the actions of others:

“Can I come with you? /I just moved here/And I don’t want to fall apart/I have had the best time with you”.

“I need to talk to my mother/Mama, I’m scared to go under”

“Mama, he loves me no more/Holy fuck, I’m torn”

“I need a blood transfusion soon, from you/I want to glue us back together”

“You know he’s gonna break you/But you love him anyway… Won’t you run for your life?/Paralysed”

“I thought I was in Eden/I won’t go there”

“I can hardly breathe at all/I’m so cold”

In fact the only other positivity comes in the last three lines of the album:

It’s hard not to conclude that Ingrid’s sense of isolation and detachment, so readily displayed on the first international album ‘Silent Treatment,’ has not gone away; and possibly never will. She still clutches at straws while her life remains determined by others as much as by herself. The ‘treatment’ may no longer be silent but she has not yet been discharged from it.

She has said “We needed to expand the concept of the album. I needed a bigger project to get back my ambitions and inspirations. Mother is bigger than an album. I just want to prove to everyone that we can do whatever we want.”

I’m not sure quite what those last two lines mean. Possibly that she has aspirations to turn it into a play, a TV drama script, perhaps a film even or some form of multimedia extravaganza. Trond Bersu has in recent years acted as producer to Danish artist Lydmor, who has followed that path. Something might have rubbed off.

But for now we just have an album. For my money a very serious contender, even at this early stage, for Album of the Year.

In support of the release Highasakite have announced a series of live dates, including a headline show at London’s O2 Islington Academy on 27th April 2022.

Full schedule at the time of writing: