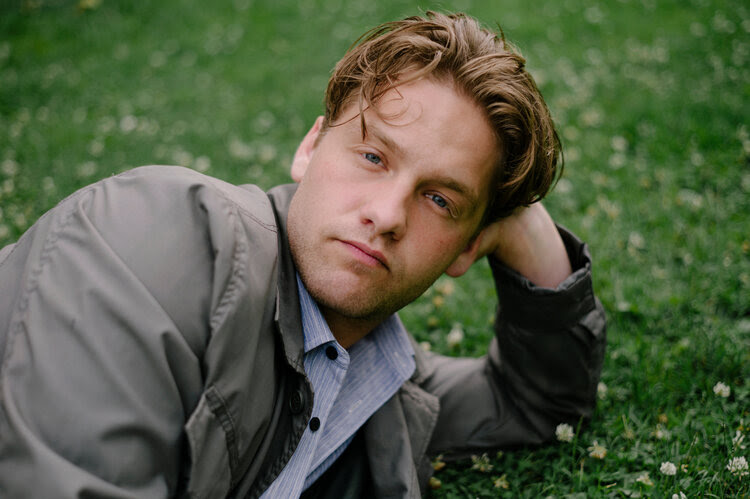 Holm is Mikkel Holm Silkjær, the front man of Danish indie rock band Yung, who is about to release his debut solo album as Holm, ‘Why Don’t You Dance’.

I reviewed Yung earlier in the year; a track from their own album, ‘Ongoing Dispute’, which was released in January. They take inspiration from Killing Joke although I thought the track in question reminded me more of Arcade Fire. I also mentioned the singer (Holm) has an aura of Arcade Fire’s confident but self-questioning Win Butler about him on that song as well.

It was evident that Yung are deep thinkers who tackle serious topics – their song concerned alienation, loneliness and the ‘remedies’ we turn to when confronted with pain or struggle and I’m certain Holm takes a lot of credit for that.

There’s a complex story, of which I won’t delve into too deeply, of how he came to “understand” his own album, three years after he started writing it. He read Raymond Carver’s short story collection ‘What We Talk about When We Talk about Love’, and specifically ‘Why Don’t You Dance’ for the first time. It is an enigmatic tale of a man apparently selling off his life’s possessions in his front yard and concludes with a young woman, who bought some of his belongings, still trying – and ultimately failing – to figure out what the man’s ‘story’ was – there was clearly more to it.

That prompted Holm to realise he had been in a dark place for a long time, that he hadn’t been vocal about it, but that it was there in the songs. He then wrote the last song for the album, which is about the catch-22 of wanting to get better, but worrying he wouldn’t keep producing good work if I did. He recorded it the next morning, and knew immediately why ‘Why Don’t You Dance’ had to be the title of the album.

To me that is an interesting observation, the catch-22, because several other Nordic artists I’ve reviewed have made a similar point, perhaps most notably Norway’s Siv Jakobsen, who spent an entire album track fretting over whether she could write good songs if she wasn’t having a breakdown.

Of ‘Erase and Repeat’ he says, “Having a predetermined idea of why certain people reach out to you can, at times, leave you disappointed. Being too certain of your abilities can lead to overconfidence. A search for devotion seems senseless if you have lost touch with who you are.” Well that makes sense.

The PR says that the album generally “marks a shift away from his group’s predilection for taut rock and roll and instead embracing a different side of his musical personality, one defined by his sharp ear for a hook, as well as – crucially – his burgeoning ability as an expressive lyricist”

There is undoubtedly a strong hook throughout this song courtesy of a catchy guitar riff. The lyrics are crisp, and uncompromising:

The accompanying chords are so powerful they are overwhelming at times while lyrically and vocally he falls somewhere between Carter USM (it could actually be Jim Bob speaking in the opening verse) and Morrissey.

An impressive performance throughout from Holm and a strong indicator of the quality of the album.

‘Why Don’t You Dance’ album will be released on January 28th (delayed by supply issues) on PNKSLM Recordings.