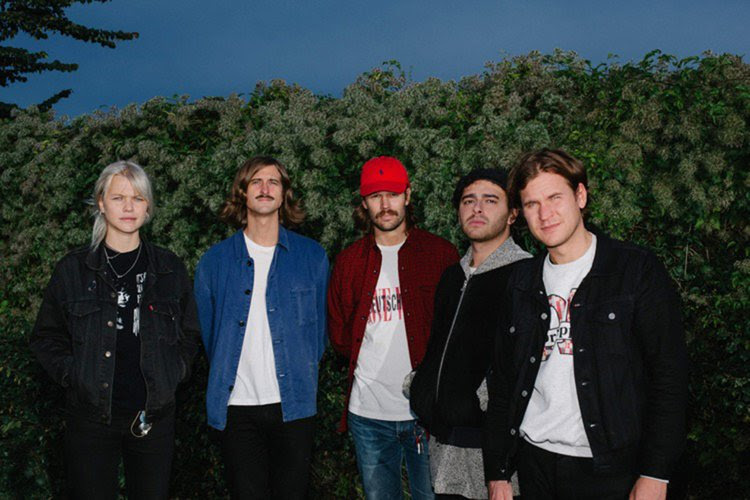 This is the first time we’ve strayed as far south in Sweden as Malmö, the country’s third city, and home to one end of a bridge, Saga Norén, Länskrim Malmö, olive green Porsches and tight-fitting leather trousers.

Horse Show is a new project featuring some of Sweden’s most prominent indie bands during the last decade, namely FEWS, Hater, YAST, and Simian Ghost. Not all are originally from Malmö and have moved there. I suspect that’s the case with Simian Ghost, who are from Gävle and Sandviken in Central Sweden, I think. The five-piece band is the brainchild of Erik Klinga, who is best known for his work with Simian Ghost and Light Vibes and who turns up on drums here. He regards the band as “a sort of supergroup”.

Formed just before the pandemic they’ve been able to make music despite not all being in the same place and focused their collective mind on it by booking a gig they knew probably wouldn’t take place so they had to produce new material rapidly.

Their debut EP ‘Falsterbo’ drops on 10th December and this is the first track/single from it.

Four of the five tracks are titled in English, only this one in Swedish.

Mr Google kindly offered me ‘The Horse Scandal’ as an alternative to ‘Horse Show’ in the translation of ‘Hästskandalen’.

The urgency of the material percolated through to the writing and that is evident from ‘Hästskandalen’’s energy.

It sets off at pace with a New Order-like riff and beat and doesn’t take a break at any time in its three minutes and 46 seconds, dispensing entirely with pesky bridges, travelling in a straight line and building in intensity throughout. It could provide the soundtrack for ‘The Running Man’.

The lyrical part is quite fleeting, shared between the ethereal voice of Caroline Landahl and the more deadpan bass one of Tobias Widman but I feel it could have been up-mixed a little and I’d like to hear more of the synth syncopation which is barely audible but attractive all the same. It only really emerges as the song plays out.

All-in-all though a very promising taster, not only for the EP but also for the full-length album they say they intend to make once they figure out how best to negotiate their other bands’ demanding schedules.

For now it appears they’ve already acquired a fan base, of people who are really into horses, some of them replying to the event for the gig they had to cancel, saying they were going to attend and ‘liking’ then on Facebook.

That reminds me of a true story I tell at every opportunity. In the early 1990s the British folk-pop singer Tanita Tikaram, best known for the single ‘Twist in My Sobriety’ which achieved chart success, played a show at a large venue in Sheffield. The promoters were bemused when hundreds of middle aged and retired folk turned up to the gig, some of them wearing formal evening suits and dresses.