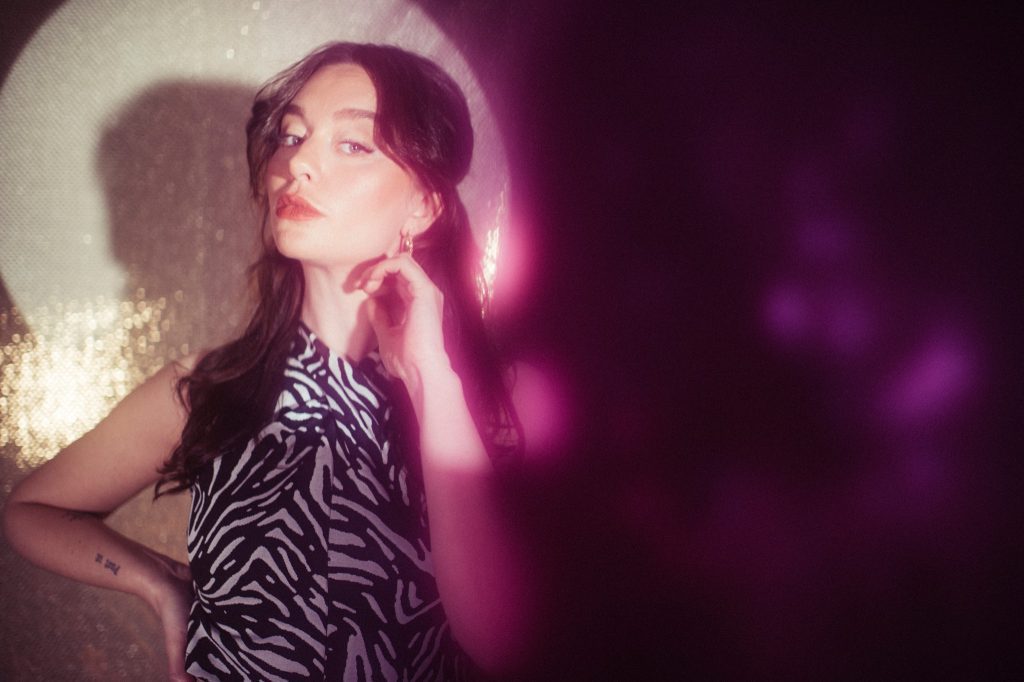 It was in November 2015 that I first encountered Marte Eberson although I had no idea then who she was; only that she provided keys and backing vocals for Highasakite when that band stole the show from top-of-the-bill  Of Monsters & Men at Manchester Academy, endearing them and her to 2,000 people at a stroke.

It was less than two years later that she and two other members parted company with that band and since then it’s been a case of onward and upward as she has shone in a multitude of ways, in the indie-pop band LÖV, with her father in the Jazz/Rock fusion Eberson, in HUSMO Hav, and as a supporting musician to the likes of Ane Brun and others. She’s become the complete cross-genre package, and she’s in big demand.

Next week she will release her first solo single for six years, one that early listening suggests will be the most pop-oriented she has produced for quite some time although as you will see below, Marte doesn’t concur.

Before then, Nordic Music Central caught up with her (and we were lucky, she’s working 16-hour days according to her social media posts) to put her under the spotlight.

Marte reveals that she’d welcome the chance to write a song for ‘Eurovision’ (and after listening to ‘Give that wolf a banana’ I reckon it’s a pity she didn’t do it this year!) and that if she wasn’t a musician she’d like to be…a spy. Well, there’s a vacancy for the new James Bond, Marte, but you’ll have to be quick. Marte Bond. It trips off the tongue. With an Aston Martin and a vodka martini…

NMC: Since we last met you’ve been very busy, with your various bands (LÖV, HUSMO Hav, Eberson with your father, Tempest Revisited and so on) and you’ve also played with some very well known musicians, for example Ane Brun. What was that like to work with her? Did you feel you learned anything from it that would benefit your work individually or in other bands?

ME: It was great to work with Ane! She’s excellent at everything she does as a musician; Singing, playing guitar, writing melodies and lyrics. I think I learned a lot from working with her. Especially to trust your inner voice and trust the ideas that I have. She also gave me more confidence in my synth-sounds.

You recently revealed that on 20th May you will release a single, called ‘This will blow’, the first music under your own name for six years, saying that you are ‘ready for new adventures’. (And I believe you’ve been playing some solo gigs recently as well?) The first question is, will there be any album as well, eventually? And you signed with a new label for it?

Yes, there will be an album. But first some singles! And I have signed with a label called Grappa. It’s a very well-know label from Norway.

Secondly, what prompted you to do it now, when you have so many other things on the go? Is there a particular reason or do you just feel that the time is right?

First of all, I love to have a lot of things happening at the same time. I like the energy that comes with it. Last year I just started to write a lot of songs and they didn’t fit to any of my bands or projects. They were something different than I had made before. And I thought I was fun! So I decided to sing them myself and it sounded kind of cool. So that’s why. There are no other thoughts around it. I just wanted to do it now.

I seem to recall that your solo work in the past has been electro-pop oriented. Will this song follow a similar format? I listened to the short clip on your FB page but it sounded like the needle got stuck!

This is more acoustic. I wanted to make songs and sounds that were a bit vintage. Last spring I was listening a lot to disco and funk from the 70’s. They really got me in a good mood. A repetitive bass, less chords, and a groove that just kept on going was like an eye-opener for how I could write new songs.

The producer of the song is Jonas Kroon, and you’ve waxed lyrical about him online, comparing him to a Ferrari. What special qualities does he bring to the job?

He’s very good at bringing modern elements into a sound and a song that is a little bit old. And that mix is perfect for my taste. I really love working with him. He really understands my thoughts.

Not so long ago you went over to the USA, to La-La Land, for a time. I wasn’t able to discover much about that from your posts on social media so what was the purpose? To do business, to collaborate with other artists?

It was a singer-songwriter camp. I met a lot of other composers from different countries and we wrote songs together. I really liked LA and can’t wait to get back.

A question I used to ask artists but stopped during the pandemic and which follows on from the previous question. Creatively, are you content with living and working in Norway or would you contemplate a change of scenery to generate a new challenge?

I would love a change of scenery, maybe just for a year or something. But that’s my dream. I would love to go to Nashville and stay there for a while.

What is your favourite genre? I guess it’s jazz?

I really don’t have favourite genre. Jazz is so much. It can be Dixieland, rock, fusion or blues and all be called jazz. And the same with pop and rock. I just like the music I like. If it touches me in anyway, then it is exciting. It can be rock, rap, pop, jazz whatever.

I reviewed the last album from your previous band, Highasakite a couple of months ago and wondered out loud if they intended to go into multimedia productions, which is exactly what they did with a film called In Somnium, based around that album, Mother. Do you have any aspirations in that direction, such as film, or writing the score for a film, TV series or a play?

No, not right now. I have too many things going on. But maybe in the future.

What about writing classical music? I remember your Korona Toccata, which you performed in the online show in 2020. I thought that was a great piece of music and one that certainly shouldn’t be consigned to history. Do you have any outlet for that sort of music?

First of all, thank you! Maybe I will write music in the future that is similar to Korona Toccata, but I’m not sure if I would define it as classical music. But to write music for a bigger band or orchestra is absolutely on my bucket list! So I hope I’ll get a chance to do that.

At the same time, early in the pandemic, you wrote online about reappraising your personal position, questioning whether the world needs so many musicians (and there are quite a lot!) and suggesting you might do something ‘socially useful’ instead. Do you ever get close to actually quitting the business at that time?  And if so, what do you think you would have done?

That time was probably the first time I really thought about changing my job. But since then, I’ve been working a lot and made a lot of music. I don’t think I ever will quit this business. I love it too much. But If I did… then it would be cool to be a spy. But I would probably work with media; TV or in a newspaper. I’m very curious about people and love to hear peoples’ stories.

Do you/did you ever aspire to being ‘something else’ entirely (model, politician, footballer, train driver…?!)

Do you set aside a certain amount of time each day for writing or do you do it when you feel like it?

What other sorts of ‘writing’ do you do if any? Poetry? Prose? Shopping lists?

What is the next step for Eberson now, after the release of your recent album? Some touring?

We are playing some gigs in Norway this year. And we would love to play in the UK. London jazz festival is a dream.

And LÖV? It’s been a couple of years since your debut album; do you have any new material lined up?

Not any new material right now, but we are playing a couple of gigs this summer!

In an interview last year I heard you say LÖV’s songs were ‘dark’ – is that really the case?

Not dark perhaps, but I feel that they are melancholic in a way. The lyrics or the harmonies have a kind of vibe that is a little bit dark.

If someone asked you to write a song for the Eurovision Song Contest (as happened with Amanda Tenfjord this year – for Greece!) would you take up the challenge?

What are your ambitions and how do you measure success? By ‘breaking’ America? Or by having a million Facebook followers? (Or Instagram, or Tik Tok).

I try not to think about success to be honest. I’ve done that too many times in the past and it’s really exhausting. I would love to play my songs live for an audience and travel to meet new people. That’s what I want. And what I’m working towards.

Many female musicians are feminists; some of them ardent ones. Where do you stand on the issue?

I’m a feminist. I think of course we all should have the same rights. And be treated equally. It’s not rocket science. But unfortunately there’s still a lot of work left to do.

The environment. Whose viewpoint are you closest to? Donald Trump or Greta Thunberg?

Will there be any opportunity to see you playing in the UK, in any guise?

I hope so! I will absolutely let you know!

Marte, thanks for taking time out to do this and good luck with your many ventures this summer.

There is a very brief taster of ‘This Will Blow’ on Marte’s social channels. We will of course be giving it a listen.