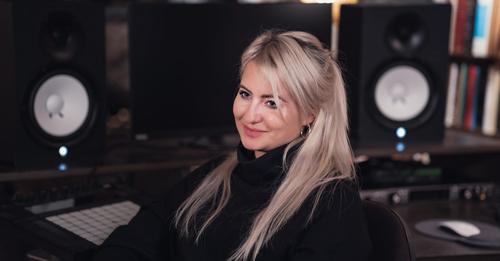 The last time Inki was here, a few weeks ago, it was with a highly experimental track from her album ‘Brotabrot’ called ‘Love of my life, bad guy’ in which she interviewed numerous prisoners and ex-inmates of Reykjavik’s Women’s Prison against a backdrop of a variety of music styles, hence the teasing title.

Now she’s back again, pronto, with a taster from another new album, this one called ‘Playing with fire’. Her first two albums were instrumental and the lyrics here have been added by Anna Marsíbil Clausen, whom I believe to be a Reykjavik-based journalist.

Another addition is her voice – again for the first time – and all I can say is that I don’t know why she hasn’t done it before. It’s powerful, atmospheric and seductive; reminiscent of Alison Moyet, backed by Annie Lennox.

My first thought when listening to it was that Brian Eno was somehow involved. The chorus in particular has shades of ‘Virginia Plain’ about it. Now that was, and remains, a groundbreaking song and there’s something about this one that is pioneering in its own way.

What she’s done is to conjure up a danceable pop song with gravitas, and that’s no easy task.

I said about the last song that there’s a place for work like that and it isn’t in the pop charts but perhaps in the National Museum, preserved for posterity. This one has chartbuster stamped right through it.

The search for the next Björk might be over already.

I don’t know if Inki’s ever appeared at Iceland Airwaves but if she was on this year’s list I’d be booking my flight right now.