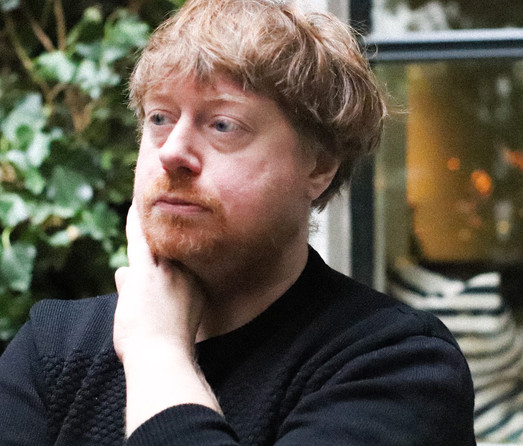 It’s a couple of years since I last wrote about Jacob Bellens, at the start of the pandemic. The song then was called ‘Summer Sadness’ and concerned the personal challenges he faced growing up. Prior to that was ‘Bread and Butter’, which was about being stuck in, waiting for your real life to start, a wake-up call to live now and not postpone things until tomorrow. Quite prescient, as it turned out.

I reckon you’ll glean from all that that Jacob is something of a philosopher, carpe diem is his mantra, and if you need any proof just check out his social media pages which are replete with wise words like “wash your face/take a deep breath,” “don’t try too hard/just be yourself,” “you will never be in this moment again” and “Loosen up, let it go” (that one’s repeated five times).

There isn’t a video for this song yet as far as I can see but for previous ones the vids included people sat around, staring into space; and one in which had marooned himself on a boat in the middle of a river on a foggy day. As I said at the time he does look like the type who’s waiting for the good times to arrive in the back of a taxi.

In ‘Doing Fine’ Jacob is resisting the lure of being caught up in waves of ‘over-thinking,’ hence the soc med messages mentioned above, which confirm the need to relax and breathe out, a sort of lyrical hypnotherapy.

I don’t believe I’ve ever heard a descent from major to minor key so quickly. What sounds like the opening theme to The Simpsons morphs, just five seconds later, into a George Ezra sound-a-like, which then alternates with a lighter vocal like an arcane soft cop/hard cop routine.

To be fair, there is a strong melody in both the verses and the chorus and it’s almost danceable in the chorus. But it’s the message that counts, one which Jacob gets across in his own inimitable fashion – “Loosen up, let it go/nothing’s wrong, with your nose,” “it’s a new day, in your life/so much to do, before you die” and the coup de grace, “You’ve only got one life/so don’t fuck it up.”

There are times when you’re tempted to think he’s parodying himself but he’s deadly serious and we must respect him for it.

Jacob teamed up with another Danish artist, M.I.L.K, on the single, which was released 22nd of July (HFN Music). And yes, M.I.L.K. has been in NMC quite recently, with ‘Silly Rabbit’, a song in which I thought he might be parodying rap. Perhaps they should start a duo called The Parody Brothers.