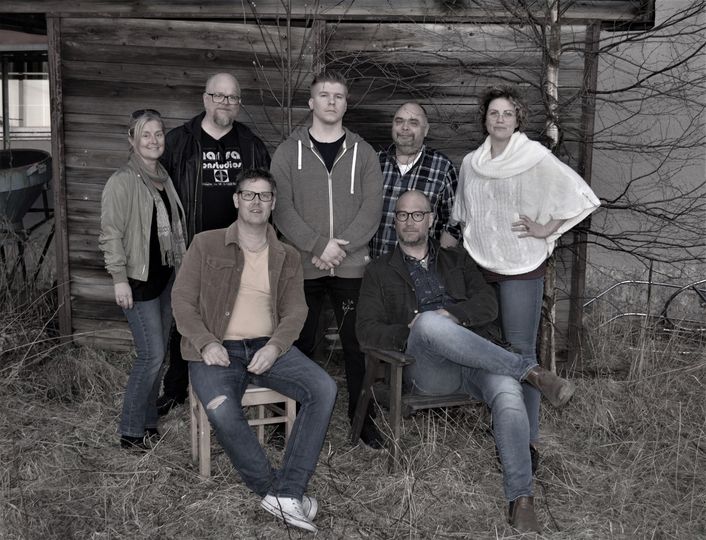 Jonsson United, Newcastle United, Manchester United. What’s the difference? Well, the Swedes haven’t got new Saudi owners with trillions of dollars to splash on their new plaything for starters. And they do have a manager, Magnus Pejlert, who understands tactics and knows what he’s doing. And they have a new song about ‘The Colours’ and they aren’t plain black and white.

The band is from Alnö, in the Västernorrlands county of Sweden and there are a lot of them, they come and go, a sort of Scandinavian Polyphonic Spree. The last time I came across them I compared them to The Waltons, the God-fearing farming folks of the US depression in the TV series, who were pretty united if I remember and I think the band photo bears witness to that.

Calle Jonnson, who is the only band member to bear the group’s name unless they are all going to change their name to Jonsson like The Ramones did, says ‘The Colours’ is a motivational song. “An up-tempo song about daring to trust that you’ll ride out the storm. I think everyone has an inner superpower to pick out when it is really needed. A force that takes one through difficult periods. Everyone can recognise themselves in it. You have to get the strength from within and, as it were, decide that you will fix it.”

The last song of theirs that I came across, ‘Mot världens ände’ (Towards the end of the World) had the theme of personal loss and time running away from us all. Obviously a group of deep thinkers.

It’s definitely up-tempo, flying out of the traps with unrestrained abandon and it never once flags. Jonsson United really should come down the tunnel to it, they’d send AIK Stockholm, IFK Göteborg, and Malmö FF packing every time.

Sorry I can’t tell you what the lyrics mean, my knowledge of Swedish is at the level of the Swedish Chef in The Muppets. But for all the good intent it’s one of those songs which don’t really need lyrics, if you know what I mean.

‘Färgerna’ is released on streaming services on October 22, 2021.

Jonsson United is, this time out (no substitutes on the bench):