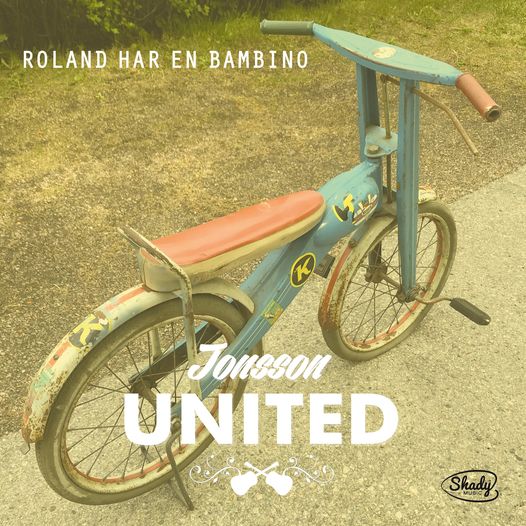 Time for a bit of light hearted fun because many of the songs recently have been heavy duty and there’s a pearler coming up tomorrow night that could have been lifted from Blade Runner.

Jonsson United have made an entrance down the tunnel and into these pages previously, last year. They are undeniably a fun band, from northern Sweden (Baltic coast) where winter nights are long and you need a sense of humour but their musicianship isn’t in question by any means and they are a group of deep thinkers too; eight of them in total although they come and go as they feel like it.

A bambino I should mention is a form of child’s bicycle from the 1970s with a loaf seat and the pedals on the front wheel and this is an old song, presumably from that era, resurrected and jazzed up even more.

It is sing-along stuff, as is much of Jonsson United’s work, but with disguised profundity. It has a similar timbre to, say, Gabriel’s ‘Games without frontiers’ and the same hidden depth of meaning. In this case it’s about narrow mindedness, parochialism and an unwillingness to cope with change. Presumably Roland is riding his bambino because he can’t figure out the gear ratios on a BMX but at least he’s optimistic about what he’ll see while he’s riding it. (Which makes me think of Mungo Jerry’s ‘In the summertime’ as well. Perhaps JU will have a crack at a cover of that, this summer). It would be fun.

And the beauty of it is, you can interpret ‘unwillingness to cope with change’ in many ways, including a defensive one. Change isn’t always good.

Other than that I can’t give you any more help because it’s in Swedish. I hope they might have a shot at one in English before too long so that we can really put them under the microscope.

The band is (right now, it could change at any moment) –