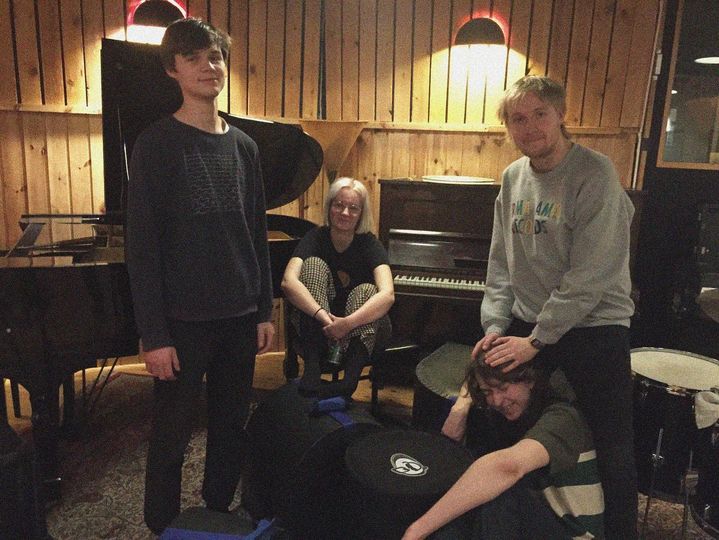 I’ve always been a sucker for a seductive female voice and that’s what you get from Kindsight’s front woman Nina Hyldgaard Rasmussen, who pitches somewhere between Hope Sandoval, Dolores O’Riordan and Jenny Lewis.

Not only that, the song is in the style of some of Jenny Lewis’ work, particularly her Rilo Kiley era, albeit a little more shoe-gazey perhaps, while guitarist Søren Svensson plays very much in the fashion of that band’s Blake Sennett, a criminally unrecognised master of his craft. Count that as a compliment, Søren. Band management isn’t my game but I reckon they could do worse than throw a couple of Rilo Kiley covers into their live act

Kindsight formed when Rasmussen and Svensson bonded over a shared love of The Sugarcubes, subsequently recruiting bass player Anders Prip and drummer Johannes Jacobsen and by all accounts have earned themselves a reputation for their live shows already in and around Copenhagen.

‘Don’t You Grow Up’ was the first song they wrote together, three years ago; a coming-of-age indie treatise that works as a feel good song whatever it’s saying, on the simple premise that we all need some of that right now and ‘Don’t You Grow Up’ feeds it to us.

The litmus test I apply to all Nordic indie-rock bands like Kindsight is could they cut the mustard in the UK, where it is very difficult to make yourself heard over the thousands of home-grown wannabes? (And it’s even worse in the US, of course). Could they get airplay, could they fill a small venue, say 100 capacity, on their first tour, on the strength of one song? Bear in mind that Danish artists as astounding as Lydmor have given up winning over the British and that if your name isn’t Lukas Graham or MØ you probably aren’t going to get a look in.

Even so, my guess is that yes, they could. Sometimes it’s difficult to pin down exactly what a band has that makes them stand out but just a couple of hearings of this song tells me that they’ve found the formula.

Their debut album will be released on Swedish indie label Rama Lama Records in early 2022. ‘Don’t You Grow Up’ is available to stream and download now.

Speaking of touring, I see that they have some shows coming up in the next few days in Denmark and southern Sweden, which means crossing that good old Øresund Bridge that we know and love here in Britain. One of the venues is Plan B in Malmö while another is the Hotel Cecil in Copenhagen. I hope it isn’t related to the creepy hotel of that name in Los Angeles with its grim list of suicides and murders. If it is Kindsight might want to apply some hindsight, adopt their own Plan B, and avoid it.