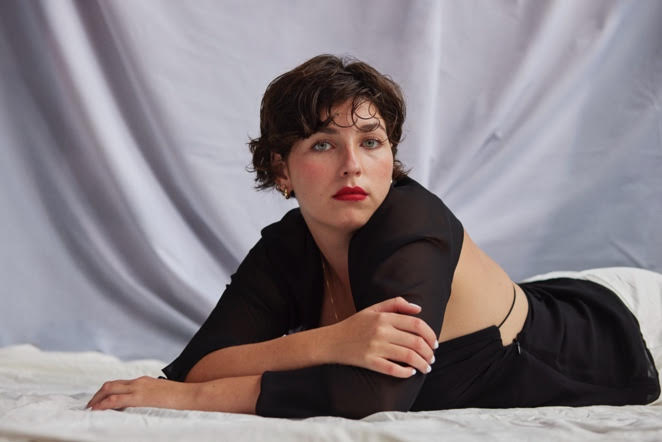 Despite the Italian-sounding name I’m assured Laura Ziani is Danish. And when the PR insists that this, her first single, ‘Money’, “might as well be the title track for the next James Bond movie” then you have to pay it attention. Especially so as there is talk the next ‘James’ Bond will be female.

There was a spate of British and American musicians arriving on the scene a few years ago for whom the main instrument was the harp if I remember correctly, like Joanna Newsom, followed later by Emilie & Ogden and Mikaela Davis. So I was interested to learn that Laura’s speciality is the cello, which she’s been studying since the age of seven, later at the Royal Danish Academy of Music and writing alt-pop songs based around it.

She says she likes to “blur the boundaries that are drawn up for what fits in where”, finding a mix between the organic and the electronic.

I’m surprised there aren’t more solo cellists or perhaps there are and they just passed me by. The cello can be a dynamic instrument, “making” songs like Denmark’s Choir of Young Believers’ ‘Hollow Talk’ and many of the early ones by the US band Arc Iris, courtesy of Robin Ryczek.

‘Money’ is about finding a meaningful point of view in a material world; that we all come from different starting points, where some are in a shorter queue than others for a peaceful life with opportunities. Having been born with a silver spoon in their mouth is what she means, I think.

Now, having said all that about the cello it actually plays a minor role in this song, with piano and synthesised sounds to the fore, along with her own harmonies. It’s powerfully sung in a clear, sweet vocal which is, I’m guessing, mezzo-soprano (I’m sure I’ll quickly be corrected if I’m wrong) and the lyrics make the point gently without being too pointed, which wouldn’t fit the general ambience of the song (“Can you believe it when they say we’re all together/can you believe when they say we’re all the same?)”

A lovely song for sure, although it would need to be owned by a Bond in touch with his feminine side to qualify for the film he (or she) parachutes into next time out.

There is a shorter, recorded at home, live piano version of ‘Money’ which I decided to post here rather than the studio version simply on the grounds that it is very personal and suggestive that live shows would be quite intimate.

Personal even down to lipstick application, I thought I was watching a Revlon promo at first, and was ready to hit the ‘Skip Ad’ button!

‘Money’ is produced in collaboration with Birk Storm and is published via the music agency Junobird. It is released on 19th November.