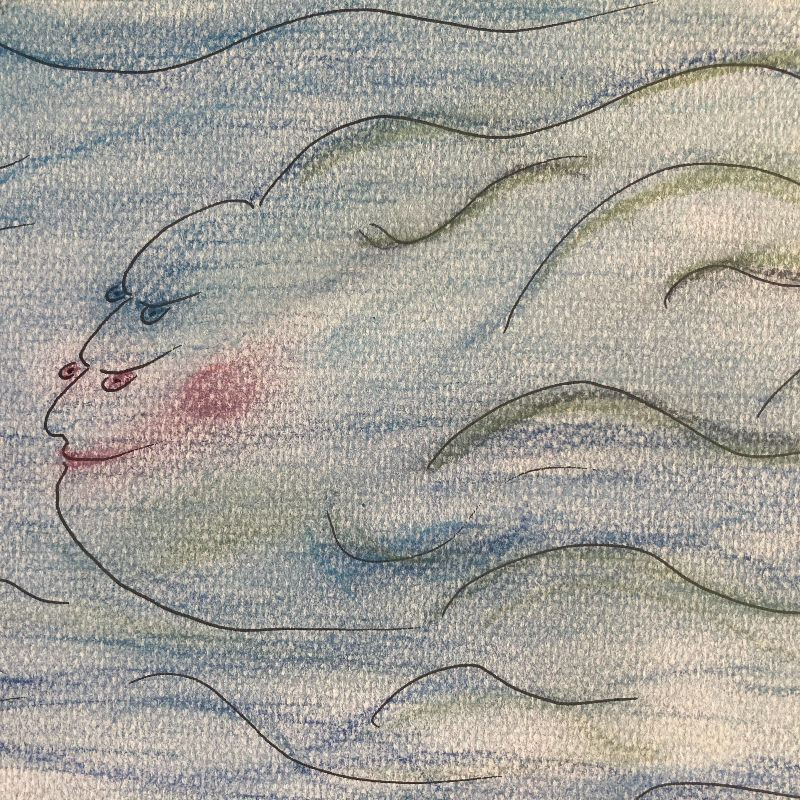 No, I didn’t know what moiré means either. Apparently, ‘a shiny finish and wavy pattern on fabric, especially silk’. Yes, I get the idea maintenant, that rippling effect of the light on water. I see it in the Rochdale Canal every afternoon now that autumn is here and the sun is lower in the sky. Especially when someone throws an old TV set in. As they do. Often.

It all sounds very cultured, ‘la moirure du lac’, but that’s what Le LAC LONG 814 are all about; culture. An ensemble of Central Swedish gents of a certain age comprising Bengt Söderhäll (a poet) and singer/musician Daniel Östersjö, purveyors of ‘chansons françaises’ who wouldn’t look out of place in La Vie en Rose, playing an opening set for Edith Piaf.

Habitually I try to paint a picture of the images these two guys create. Previously I’ve wandered down the Parisian Left Bank with them and hung around the seedy fringes of Montmartre. Their last EP has a distinct flavour of Inspector Maigret, the 1960s TV series, about it. Everything they write is chock full of l’atmosphere du temps.

‘La moirure du lac’ is taken from the forthcoming album ‘Tessons Flottants’ (floating shards), out next month. The duo’s debut album ‘Treize chansons’ was released in November 2018 and has been followed by several singles and EPs.

This song tells how the nature around Dalälven (which is ‘Le Lac Long’, actually a river which flows through their town of Älvkarleby) “wakes up your inner traumas and offers comfort and healing”.

Now that’s something I’ve never thought of previously. Songs can raise expectations and then damn them as they rise and fall in intensity but I’ve never considered one that ‘creates trauma’ and then assuages it within four minutes. But then that is what this one does, the gently rising ‘trauma’ coming to a head around 2:50 when Daniel Östersjö abruptly speaks the lyric rather than sings it and after which the sting has been taken out and the river keeps on flowing to the sea to the accompaniment of gentle guitar and violin (courtesy of the French artist Magali Michaut) with the violin taking on the manifestation of the Scandinavian folklore character ‘Näcken’, a water spirit.

I hope you’re keeping up with all this, there’s a hell of a lot going on here. ‘MMMBop’ it ain’t.

It’s quite sumptuous really, a song with deep meaning but one that equally you can relax to.

Since I first heard them I’ve always thought these two should be writing TV or even movie scores. The BBC is currently showing a French period cop drama, ‘Paris Police 1900’, a fin de siècle series set around the infamous Dreyfus case and the simultaneous rise of anti-Semitism and anarchism during the Belle Époque which almost brought down the Republic. One minute the cops are beating the s*** out of the Jews or the anarchists (or they’re doing that to each other), the next the anti-heroine is performing fellatio on the French President, who promptly drops dead (a true story) then wanders off to join the ladies who lunch for a spot of collective opiate injection to the sounds of a string quartet.

A thorough exploration of Paris and French society at the turn of that century and again there’s so much going on you don’t know where to look first.