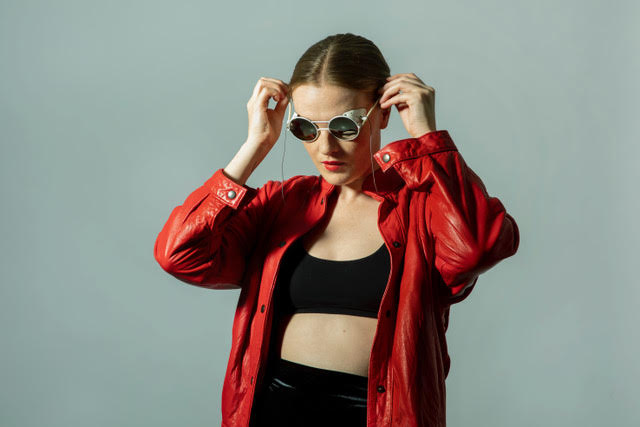 Louien (Norway) – Figure me out (title track from recent EP)

We covered an earlier single from this EP, ‘No’ and I’ve noted previously her ability to switch between styles in the same song and in a way that doesn’t at all come across as pretentious.

But, defying that apparent convention, and in the same way as in ‘No’, Louien (Live Miranda Solberg) sticks to a theme throughout the title track of a short album in which she muses on “how characteristics we think of as cool, such as aloofness, are often the reverse and that it’s much cooler and, indeed, stronger to be yourself and choose vulnerability when you know it might bring pain.”

There is something inherently soothing about Louien; she’d make for a good doctor if she ever hankered after a different career. She has that bedside manner that’s either in you or it isn’t and it is distinctly in her.

Set to the same funereal march I haven’t been able to get away from all day she throws down a challenge straight from the start: “you’ll never figure me/your love for me roots in doubt/‘I will never lose my pose/I’ll keep my distance to keep you close.” Go figure that little conundrum.

It starts with a saxophone note that is so earthy that I thought it might be Rolf Harris (can I mention him?) on his didgeridoo (and to Louien’s credit, how she manages to come in on the same note as that sax when she starts singing is a wondrous thing. If she can bottle that technique she’ll make more than the inventor of auto tune could dream of.)

Early doors it’s a sultry, jazz-like number that you might expect to hear at Seb’s, the fictional jazz club in ‘La La Land’, but it isn’t long before it gravitates into an anthem which gains in strength and purpose, broken only by a tasty little sax solo (which might have been longer), finally taking it close to the realms of gospel before it unexpectedly concludes, to play out a sedate guitar outro, which only adds to that ‘figure me out’ challenge.

An anthem for the non-phonies, perhaps. Someone tell Holden Caulfield.

You don’t have to do much research to find Louien being compared, inter alia, to Feist (can I mention her?), Sharon Van Etten, Carole King and Gillian Welch. Fair enough. On ‘No’, I could hear Courtney Marie Andrews in her.

But this track has Jenny Lewis written all over it; musically, lyrically and vocally. And here’s a thing. Louien has a band, Silver Lining, which was of course a track on Rilo Kiley’s final album, just after its founder Lewis had released her debut solo album, the gospel-influenced ‘Rabbit Fur Coat’ with the Watson Twins.

Coincidence? Probably. But I hope Live at least enjoys the analogy.

The six-track EP was released on 16th September on Jansen Records and has been combined with her earlier EP ‘No Tomorrow’ into a vinyl album release, on the same day.