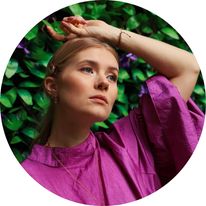 Pardon me for repeating myself yet again but there are numerous reasons that attract me to particular artists out of the many submissions that NMC receives and referrals it picks up. It always helps if an artist has a USP, something that catches the eye.

In this instance the first one is that LUNI (Luni Hanke) has started an association with the perfume company N.C.P. Concept, founded by the Swedish actress and entrepreneur Noomi Rapace. That’s nothing to do with Luni’s music of course but anyone who hangs out with ‘The Girl with the Dragon Tattoo’ demands instant respect.

She’s a Danish songwriter, artist, producer and entrepreneur from a classical and choral background, a singer for 20 years, and song writing and performing for 15 years, who discovered electronic music, and now seeks to “mix those two universes together in my own music”.

Something of a feminist, she founded ‘Girls Make Beats’, a platform for female music producers, having acquired music production and engineering skills over a period of seven years.

She released her premiere single ‘Lie in Lace’ in the autumn of 2021 and follows it with this new song, ‘Parallel Universe’, in which she describes the moment when you meet someone and feel as if you already know them; there’s a feeling of recognition and reassurance.

The other factor involved in my singling out Luni for attention is that amongst the many people she is compared to, is our very own Bexleyheath angel, Kate Bush. So what, you might say; the world and his dog get compared to her. And that is so, but on this occasion it is an accurate evaluation. Just listen to the section between 1:20 and 1:50 in the song for some pure Bush-ism.

It’s a catchy song with strong and memorable melodies. Luni has a wide vocal range and there is some tasty harmonising in which I reckon she has multi-tracked her own voice. The tempo slows right down in the bridge, which offsets the bulk of a song that is both bright and bubbly and dark and sultry, creating a mysterious, atmospheric effect.

And Luni’s classical background is evident in the inclusion of an appropriate strings contribution which complements the vocal harmonisation perfectly.

There’s always a market for high-class pop like this but not always enough of it to go around. This ‘Luni Tune’ (can I call it that; only joking!) will help fill the gap.

’Parallel Universe’ will be released on February 18th by ART:ERY MUSIC GROUP.