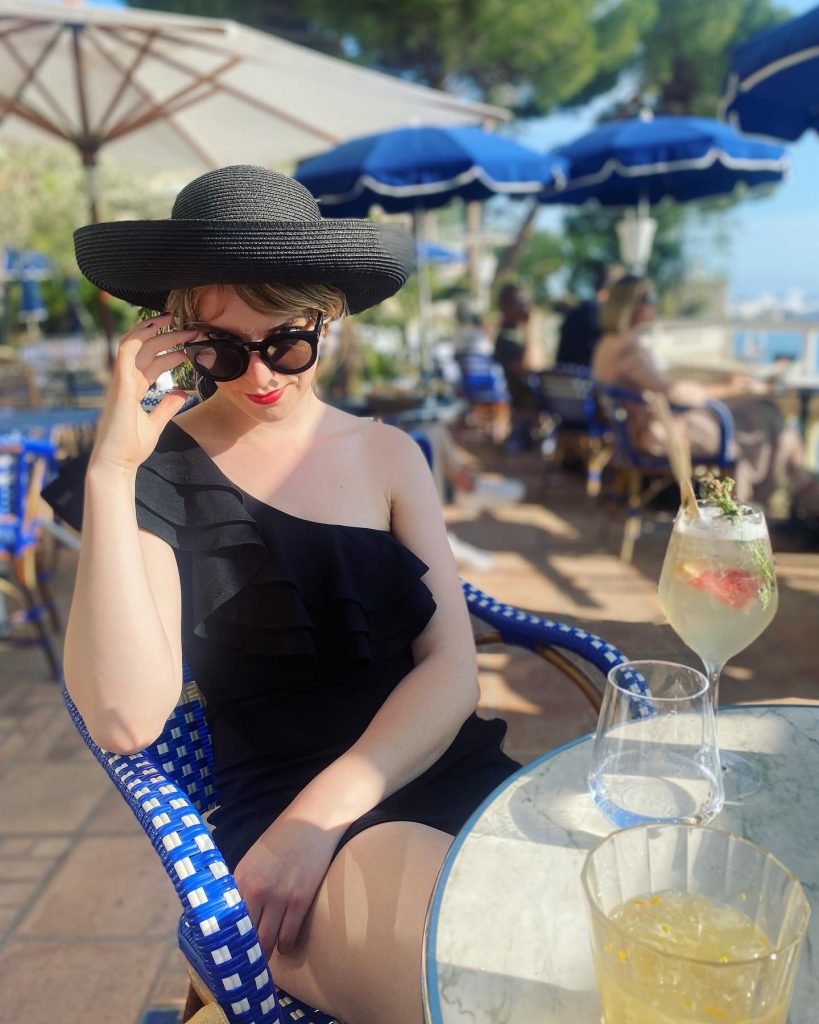 On the surface and by her standards Lydmor (say ‘Leeth-myur,’ it means ‘Mother of Sound’) has been quiet since the release of her fourth album ‘Capacity’ 18 months ago but in reality the uncompromising enigmatic Danish bundle of energy has been anything but.

Her many personas include those of producer, dancer and DJ, also as a composer for theatre, music hall and film, much of which she has successfully completed over the last few years but some of which she did not, as a direct result of the intervention of our old foe Covid, which locked her in her Copenhagen apartment for what was too long for her own good.

These compositional activities bring her to exotic places such as the Cannes Film Festival (see photo), and she wins international awards for them, too. As with any musician who operates across the arts spectrum there is always the danger that they will slip away from the routine of writing, recording and performing songs when such opportunities beckon, possibly never to return. I thought that about Anna Calvi on several occasions, an artist not dissimilar from Lydmor in her sometimes outrageous stage persona, especially when she got to write the score for one of the BBC’s most watched dramas, but fortunately she seems to be gravitating back towards writing and performing her music.

Similarly with Lydmor – but then something very interesting happened last December.

She went to Oslo to play the final show of a long-awaited European tour but it was hit by Covid. Determined to finish her tour, she sat by the piano at the venue and played a fully acoustic concert to the audience. The next day she was supposed to fly home to Denmark for Christmas and the New Year but instead booked a studio on a remote Norwegian island and went back into isolation “to create music without the possibility of hiding myself behind layers of sounds and endless editing.”

Reading that takes me back to April 2020, her incarceration and her seemingly everlasting online soc med concerts and fan sessions in which she wrote, built, rebuilt and rewrote new songs with their help. It probably saved her from going mad, but the real catharsis came with this solo session. Just Jenny Rossander and her piano.

It also reminds me of this skill she has, of being able to write the most explosive electronic synth-loop bangers you’ll ever hear from a solo artist (and perform them accordingly) and, in complete contrast, the gentlest, most poignant piano ballads you’ll hear this side of the Pearly Gates. I’ve seen her reduce adults to tears with them, I kid you not.

The island retreat resulted in a new album, ‘Nimue’. I’m not sure what it is about. Nimue is a night moisturiser (which I can personally recommend, darlings). It’s also the name of the protagonist in ‘Cursed’, an American fantasy drama web television series on Netflix. And of course in Arthurian legend it is the name of a sorceress, also known as the Lady of the Lake, Vivien, or Niniane. Now that would be so Lydmor.

This lead single from it is ‘LSD Heart’ and if you’re thinking that she’s released that song before you’d be right; as a single and on the ‘Capacity’ album. Indeed, I’ve seen her perform it live and reviewed it. This one is an acoustic remake and the tracks on the album will embrace other remakes, new songs and even some covers. (I hope there might be some Fiona Apple on there; I think she’s covered some of her songs in the past. Maybe a Highasakite track or two as she seems to like them. We’ll see)

If you like feminist songs (and she is one, par excellence, even going on Danish national radio to debate mano a mano with a hard talking misogynistic music critic) ‘LSD Heart’ is right up your street, dealing with male domination of the arts and personal preferences for modern living and loving in the same stanzas.

I didn’t think the original could be improved upon much but just like Apple she can deliver the same song in a different fashion every night as you’ll see and hear later.

In this version she has both toned it down to acoustic basics and jazzed it up with changes of pace, key and tone, adding some of her enchanting little semi-classical meandering piano runs.

The introductory bars alone take your breath away as she somehow manages to channel ELP’s ‘Take a Pebble’, overlaid with the haunted screams of the demon-possessed Regan MacNeil in ‘The Exorcist.’ Is it a coincidence or did she mean to do that?

And the vocal is more sensuous than on the original; lushly evocative.

The end result is something that is both delightful and utterly excoriating and acidic at the same time. There are few artists capable of that.

The saddest thing to me is that unless there’s a serious radio edit you’ll never hear this on the BBC as you should be doing. ‘Piss’ and ‘bullshit’ alone will see to that, and as for “I don’t come when they blow me” that would send the governors into such a state of shock they’d have to lie down.

Here is the track and then, as a bonus, there is a video of the way she performed ‘LSD Heart’ at the Reeperbahn Festival in 2019. In that version watch for her facial expressions and listen to the way she spits out the words “sexual abuse.” Both are pure Apple, an artist of whom I’ve said since the very first night I encountered Lydmor that she has the capacity (pardon the pun) to be spoken of in the same breath.

The release of ‘Nimue’ will be followed by an acoustic tour this autumn but it won’t include the UK, again. I’m hoping that she and her management will revise their position on touring here before long

After that, only she knows.