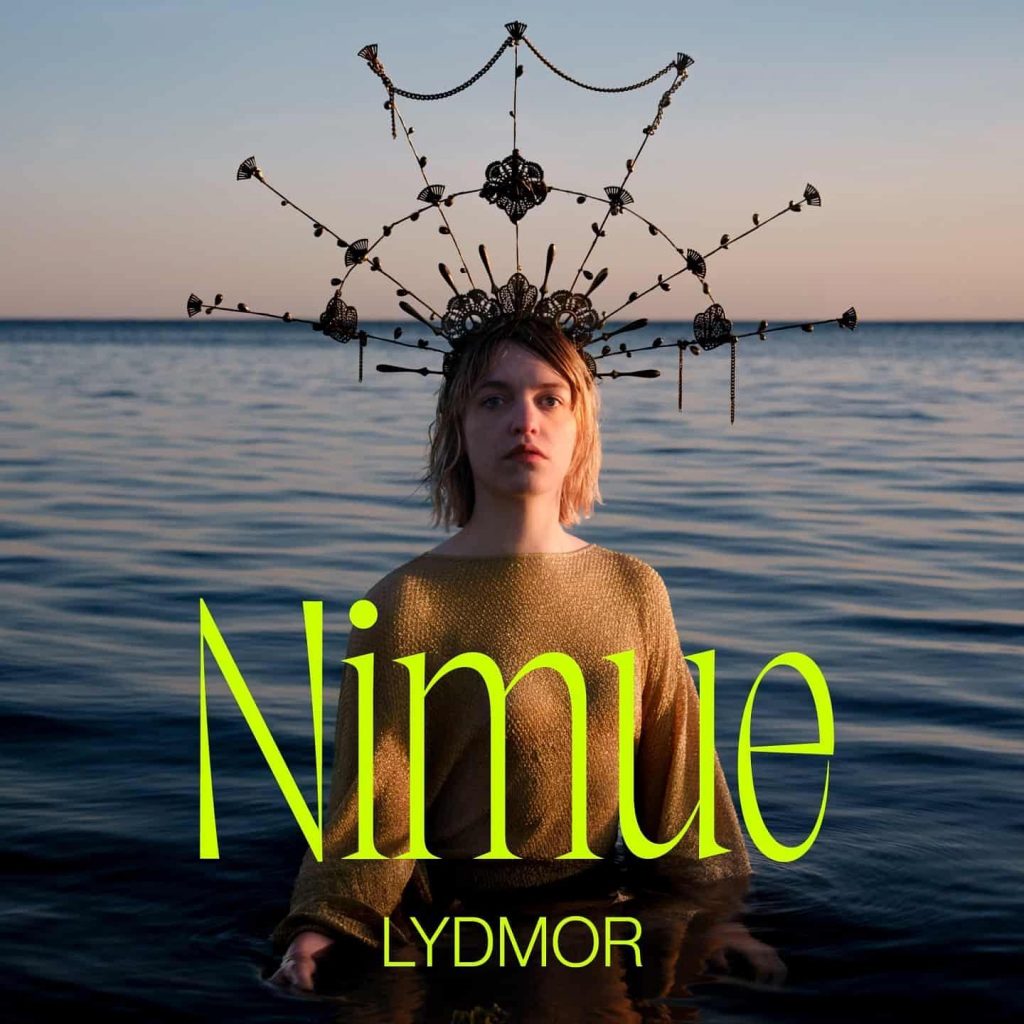 Several artists appear in these pages quite frequently for the simple reason that they have that little bit extra, that je ne sais quoi, and Lydmor comfortably slots into that category.

We had a taster from this album, ‘Nimue,’ which follows only a year or so on from her previous one, ‘Capacity,’ and which wasn’t ‘planned’,a few weeks ago in the form of an acoustic version of ‘Lsd Heart’, in which she managed both to tone it down to acoustic basics and jazz it up at the same time.

The album was born out of a semi-abandoned, Covid ruined-gig in Oslo in which she could only play an acoustic set and after which she chose to stay on rather than return home to Copenhagen for Christmas, booking a studio on a remote Norwegian island and going back into isolation “to create music without the possibility of hiding myself behind layers of sounds and endless editing.”

Recently she’s being saying on social media that it is her “darkest album yet.” So what are we to make of it?

It’s a 13-track album, made up of acoustic versions of songs from previous albums, some new ones and a cover.

I’ll whip quickly through what she’s done with the original tracks first, ignoring the one cover (Nico’s ‘These Days’) because it is the new material that intrigues me the most.

This version of ‘Helium High’, a 2017 single and one of her early feminist statements, is almost a different song altogether, with more implied menace than the anger of the original, and with an ominous choir that suggests the influence of her theatrical background since the song  was first released. A full minute shorter than the original it rolls straight into ‘Lsd heart’, a song from the ‘Capacity’ album.

‘Soft islands’ is from ‘I told you I’d tell them our story’, her second but last album, and one of my favourite songs from it, in which it was an absolute EDM banger but split into two with the first half being more of a ballad. This version has greater balance and to a repetitive synth line overlaid with a haunting vocal, and it plays out without the manic-ness of the original. What you lose on the swings you gain on the roundabout…

The original ‘Diamond breeze’ (‘Capacity’) has a lilt to it, almost waltz-like. I remember saying it could have been a song from a Bond movie. This version is slowed right down, with an oboe taking up the main theme early on. It has moved indoors, from the Caribbean Sea that Ursula Andress clambered out of to the supper club where Bond dines and flirts while listening to this seductive ballad from the mysterious girl who “doesn’t know who I am.”

‘Shanghai roar’ was an anthem on ‘I told you I’d tell them our story’. I was fascinated by what she’d do with this one. It’s been transposed to piano, which is the only instrument, and the percussion eliminated. The vocal isn’t as strident as the original and she experiments with her voice in a way I haven’t heard before, reaching some pretty high notes along the way.

‘Bridge’ (from the album ‘Y’) has been slowed down a little from the original and de-dramatised but with added emotion, even if that does sound contradictory.

‘Mark of beauty’ (also from ‘Y’) is virtually unrecognisable from the slightly manic electronic original, and the darkest track on the album, almost Phantom of the Opera-like.

Finally, ‘Hotel Ads’ from ‘Capacity,’ is billed as a ‘Fireplace version’ and It’s just that, a campfire sing-along to (unusually for her) an acoustic guitar. It’s reminiscent of how ‘Uranium Heart’ was a similar outlier on the Highasakite album of that title, and I wonder if that was an influence?

The new material, four songs in all, is mainly piano based and generally more mellow than the material on the last two albums.

In ‘Like a building’ she’s back at her favourite piano and with a simple melody that will ingrain itself into your conscience. There are shades of Regina Spektor in both the sharp lyricism (“I crash like a building someone put a bomb in”) and the melody.

‘Any minute now’ is notably mellow, closer to mainstream pop than she has been for a while but the sophisticated piano accompaniment is delightful again. She has one of the best left hands in the business.

It’s so laid back that the percussion is brushes, over that piano, again. As soon as I heard it I thought “this is Apple, performing live in her favourite club, Largo”. Somehow Jenny Rossander has come up here with the Grammy-winning song that Fiona is yet to write. I rarely swear in this publication but this is fucking gorgeous; one of the classiest songs I’ve heard in years. I’ve lost count of the number of times over the years that I’ve urged her to do more of this sort of thing and I’m delighted she has done because this is truly world class. I want to hear it on BBC radio. Like every day. Played by every DJ.

Finally, ‘Grandmaster of goodbyes‘ is another simple but hypnotic piano line, this time with a jaunty melody, and a rising choir-backed chorus that verges on gospel. The synthesiser that closes it out seems out of place but represents well the concept of a ‘grandmaster.’

I’m not sure any of these songs are darker. There is less angst about them, and at the same time a little more threat, in some of them at least, if that makes sense. It sounds contradictory but then she is a little incongruous, herself. She sounds softer, as if she realises there is a bigger audience to be won without sacrificing her indie legitimacy (and she hasn’t), and more rounded.

Someone who’s more comfortable in her own skin than she has been for a while.

Right now she is in Split, Croatia where she is among the three nominees for Best Film Score at The Camille awards, and nominated with the music she made for the feature film Venuseffekten. Another one of the many strings to her bow.

When I messaged her there with questions about the new songs on the album she replied by saying that they had “come from my heart…or from the ocean…or love”, before adding “sorry, I’m a bit drunk.”

Not much more I can add. That’s Lydmor.