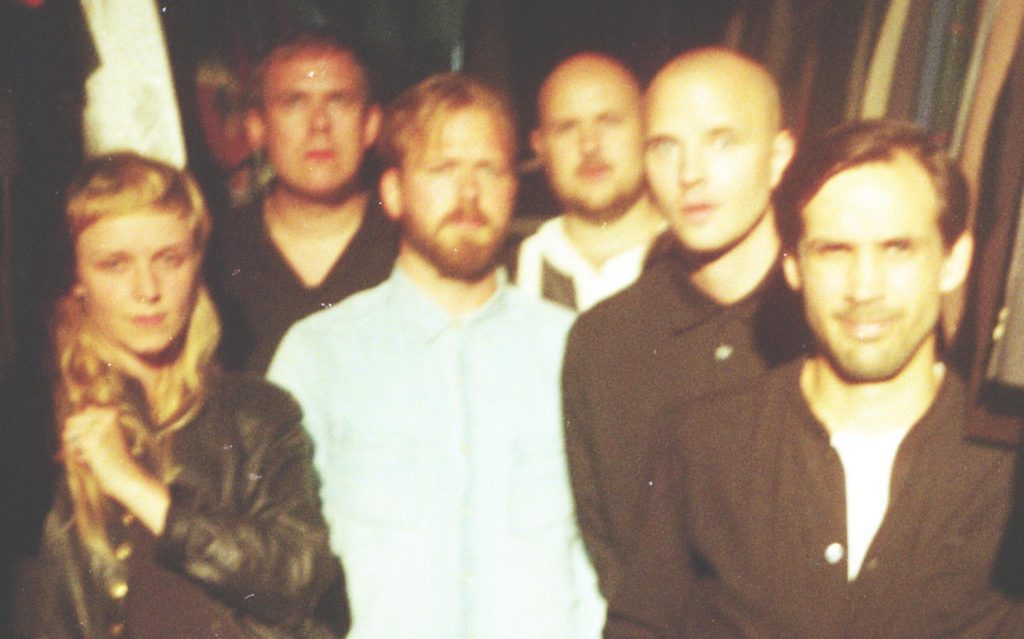 This is my first exposure to MFMB, who hail from Bollnäs, which is in central-eastern Sweden, a little off the beaten track but not isolated (I know some readers like their geography fix).

They’ve been off the radar for quite some time, nine years to be precise, and this song, ‘Six-Figure Income’, is the first track from a long awaited album, ‘Sugar’, which is set for release on 25th March and which concerns “the weight of existence and the deceptive allure of taking the easy way out.” Deep stuff.  The last one, ‘Colossus’, dates back to 2012 and they have changed their style over the years. A Swedish friend tells me that when he knew them, as 15-year olds and plied their trade as My Favourite Moonboots, it was more akin to that of early Arcade Fire.

It seems that they have adopted a more democratic approach to their writing, with all the members contributing to the sound and feel of the record.

They couldn’t have dropped a bigger hint with the title of what is the closing track on the album as to what it’s about. And it seems it almost didn’t make the cut at all on the grounds of “not sticking to the script” of ‘Sugar’, eventually being dumped at the end. Well, there are quite a few famous songs that befell the same fate – Toto’s ‘Africa’ springs to mind, and that didn’t do too badly, did it?

‘Six-Figure Income’ is an anti-capitalist rant which contrasts with what is now the penultimate track, a piano ballad which was the preferred closer. I have to say that there aren’t many capitalists these days that would be content with a six-figure income (I’m assuming the currency is dollars); seven at least I reckon, amongst the Masters of the Universe of Wall Street and London’s Square Mile.

And perhaps the rant might have been against communism because if Vlad the Mad gets his way we’ll all be reading Marx and Engels while his goons lounge on their yachts.

I’ll say this for MFMB, they’re loud. The PR makes reference to the song being, inter alia, “like Michael Gira’s worst nightmare”. I was unfortunate enough to check out Gira’s main band, Swans, a few years ago. Apart from being deaf for nigh on a week my head rattled like it was a cage with a rabid budgerigar flying around it.

MFMB adopt a similar philosophy; they turn the volume up to 11.

If you like it loud, hard and slow – and I know many do – then this is for you. It’s so powerful and bursting with angst there’s almost an element of grandeur about it. I’m finding it hard to imagine how they could even write a ballad after hearing this and the contrast on the album will be fascinating to behold.

And the funny thing is that there’s a, well I couldn’t call it a bridge, or middle eight, more of a pause for a few seconds as if they’re paying their last respects to a financial-economic system which could be on its way out; certainly in the US. What you say, Joe?

There are three gigs lined up for May in Sweden as a release tour, but none so far for the UK. MFMB are famous for their live performances, featuring dual drummers and two lead singers.

‘Six-figure income’ is available now on all streaming services.

‘Sugar’ is available to stream and download from the 25th March via Adrian Recordings.