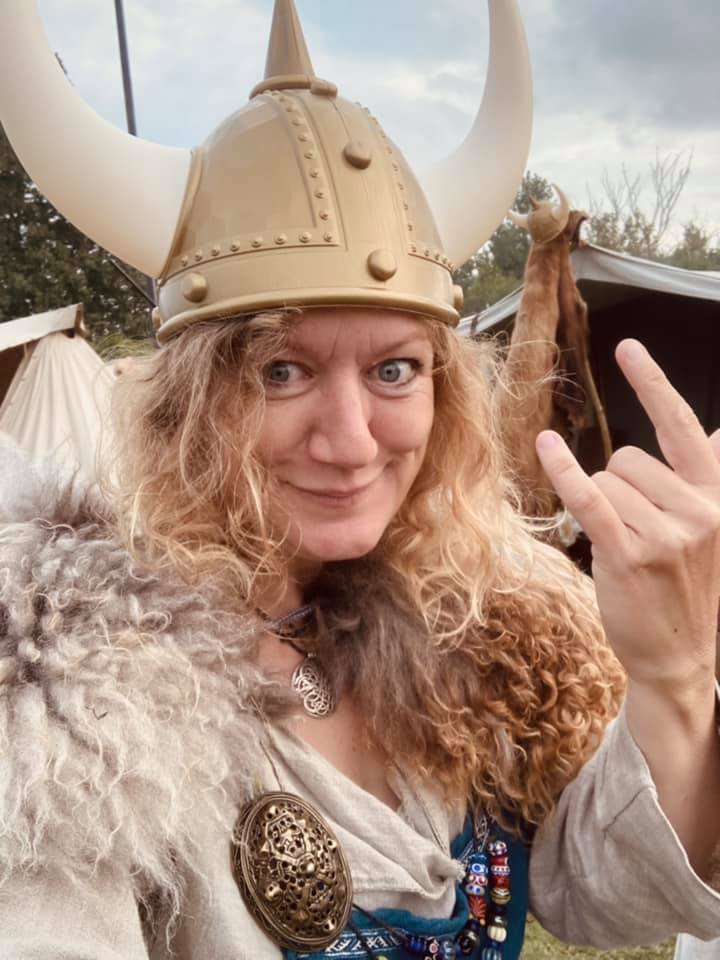 I believe this is the first time we’ve had any ‘dark folk’ on NMC. ‘Anti-folk’ yes, but not dark. What have we been missing?

Nanna Barslev (Nanna Barslev Sanger) is a Dark Nordic Folk, Neofolk, Viking music artist and composer from Denmark and is known as the front woman in the bands Huldre, Asynje, Gny and Ættir. She is also an instrumentalist on a collection of traditional Nordic instruments such as Moraharpa, Tagelharpa, Islandsk langspil, Bodhran drum and flute. Her social media account also tags her as a ‘Cultural Heritage Manager’.

‘Lysbaerer’ is her first full-length solo album and is set for release on March 18th on Digital and CD on the Norwegian By Norse label, to which she recently signed. Regular and limited vinyl editions with lyrics and English translations will follow on May 6th.

The album title translates to ‘Carrier of light’ and is a reference to the celebration of the Sun and the Moon, lighting up the dark and changing seasons.  She delves into a ‘hidden world’ between dark and light.

Her producer was Fieke van den Hurk who has worked with artists of the calibre of Eivør, and the album is said to range over Metal, distorted Folktronica, “crispy sounds” and heavy beats.

This track, ‘Skjoldmø’ (Shieldmaiden) refers to an old Norse description of women who participated in battle with axes, swords and shields and “the lyrics are inspired by a description in Saxon gramaticus about shieldmaidens going into battle by blunting the swords of the enemy with spell songs”. Her interpretation of the shield maiden theme touches on the problem of fighting inner judgment, a battle between strength and weaknesses as well as judgment from society throughout history. “To find the strength to stand together, supporting each other instead of fighting each other”, she says.

Watching the video, which was organised as a workshop for a Danish reenactment of Viking women battling it out, you could easily assume you’d tuned in to Xena: Warrior Princess. Or perhaps a sneak preview of the next in the Hunger Games franchise.

It’s all very dramatic. I imagine the monks on Lindisfarne getting a little worried if they saw it. These women – a group called the Danske Vikinger by all accounts and who might be the ultras at FC Copenhagen – don’t look like they’re the sort to be messed with. And they go barefoot! If they say it’s Tuesday then it’s Tuesday, ok? I’m not sure though about the value of a bright yellow circular shield that looks like a bull’s-eye, as one of the warriors seems to have discovered the hard way.

I’m assuming that some of these Nordic instruments figure here, along with a harp and a hurdy gurdy, because I don’t know just how you could extract this atmospheric sound solely from modern ones. There’s even one instrument that looks like a medieval cheese grater being played with a coat hanger. Although strangely perhaps the predominant drone sound throughout seems to emanating from a very modern synthesiser. The ‘heavy beats’ are quite mesmerising.

Vocally, Nanna is reputed to have a very wide range including good old Metal grunts and growls but here most of her work is in the upper reaches and it is high quality indeed.

So there you have it, a rapid audio visual trip into the wonderful world of the Vikings. Skål! Heil og sæl!