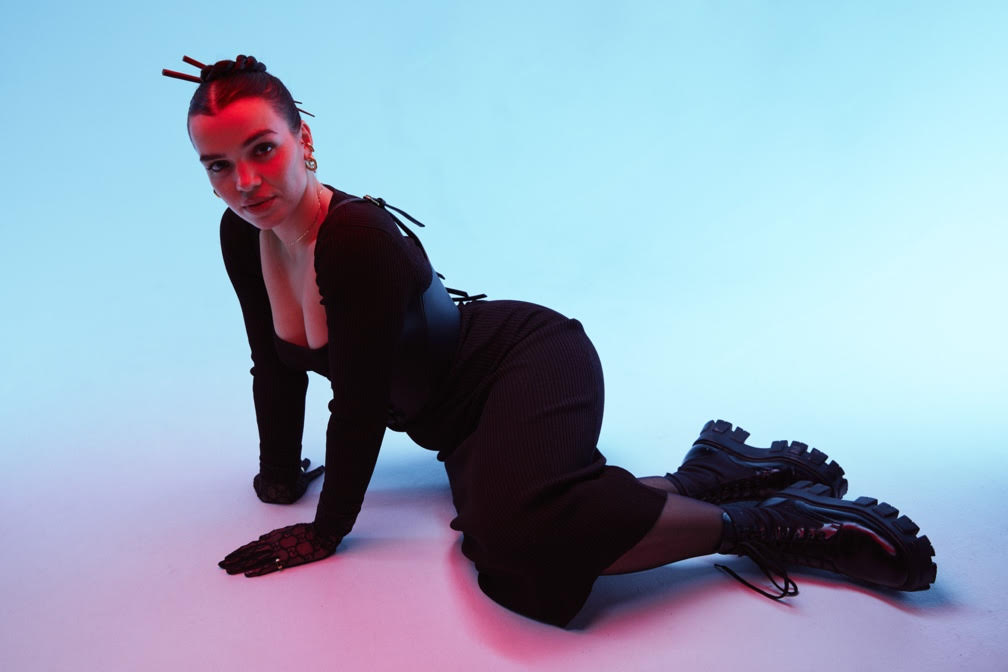 Norwegian artist ARY will release her debut album ‘For Evig’ early in 2022. Written and produced by ARY the album takes the listener through the various phases of grief she experienced when losing her twin brother, a couple of years ago.

Back in 2017 I reviewed an up and coming young Norwegian singer-songwriter by the name of Ariadne Loinsworth Jenssen, or ARY as she is known professionally. Shortly afterwards I saw her performing at the Reeperbahn Festival out of the side of a converted double decker bus, the N-Joy bus as it is known, and to a sizeable crowd. It was quite touching; she was so overcome by the numbers of foreigners that knew the words to her songs that she shed a tear or two.

At the time she was quite easily pigeonholed as electro-pop and there were quite a few of those artists around. Even so there was something about her which marked her out. The song I’d reviewed, ‘Already There’, came at the subject of love from a different angle and with contemplative lyrics. There was no wailing and sobbing over lost romances and broken hearts. Instead, the young Trondheim-raised songstress embraced the concept of love, lust and the brief encounter-style affair for all it is worth. “There’s no need to comfort me; for I go where he goes, and I know what he knows; I’m already there…”

A previous song, ‘Childhood Dreams’, which has clocked up over 15 million Spotify streams, went so far as to analyse her own development as a songwriter and performer and brought her to the attention of music media playlist compilers across Europe. In fact, in a vote to select a top ten ‘Ones to Watch’, a group of 38 Norwegian insiders comprised of ‘tastemakers’, festival bookers and music journalists were unanimous in their praise; they all agreed Ary was the most promising new artist to come out of Norway in 2017.

It was quite easy to discern her individuality even then and perhaps because of the influence of her Caribbean roots. I believe her father (the ‘Loinsworth’ in her name) is from Jamaica though I stand to be corrected on that. She might not be FKA Twigs, who has a similar lineage, but she’s the nearest Norway has to her.

But then she mysteriously vanished. It appears she became disillusioned with the pop world, seemingly unhappy with how her sound was being “shaped” by other producers (she is a producer herself). Then in a magazine article she revealed that she had recently lost her twin brother, which must be a huge wrench for anyone, and which is the basis for the album she is now preparing to release.

Resulting from this, she also released her first entirely self-produced single in June 2020, which she wrote and performed on her own, called ‘Oh My God’ and her first under a new record deal with Island. It was quite different to previous releases and she described it as “the start of a new era”, marking the first time she began making exactly what she wanted, without thinking about who’s going to hear it or if or where it’s going to live, post-release.

I had a quick listen to some of the tracks from ‘For Evig’, including the title track, an excellently composed short electronic instrumental which begins like a memorial piece that might be played in a Chapel of Rest but which broadens out into a grander almost symphonic end section which I assume is intended to signify Evig’s impact on those around him. It is very tasteful.

‘The sky was forever’ which could be a James Bond film title, is powerful experimental electro-pop. ‘New Low’ has a monumental finale, with electronic effects right out of the Highasakite text book. ‘Angels’ , ‘Clouds before Rain’ and closer ‘For Years’ are ballads and a heartstring tugging one in the case of  ‘For Years’ while ‘Birthday’ is a venture into R&B territory. In ‘Hurt You’ she engages in an exquisite duet with Emilie Nicolas in what becomes a dance track irrespective of whether or not that was the intention.

The only disappointment to me is a lyrical reference on the track ‘My awe sustains’ to “a bad mother****** like you”. While I understand from the context of the lyrics why that line is included it seems out of place in a tribute album. I’ve heard a fair few such family tribute songs in the last few years; her compatriot Sol Heilo’s ‘Closer to the sky’ about her cousin for example and the British artist Alex Neilson (aka Alex Rex) who wrote an album about his younger brother’s sudden demise together with more tracks on other albums. Neilson in particular is abrasive and not frightened of breaking taboos but even he didn’t venture that far. I hope it’s something she’ll reconsider (and it wouldn’t get her the airplay she deserves in many countries anyway so it needs a radio edit).

There’s plenty of variety in this album, it’s evident she can handle multiple styles and her sultry voice will entice you in. Both Sigrid and Moyka offered up excellent debut albums after the original singles suggested that they might be one-trick ponies but no such impediment applies in Ary’s case. She is putting down a marker here as most definitely ‘one to watch’.

Two videos here. The first is of the aforementioned ‘Childhood Dreams’ from 2017 (not on this album).

And the second is the also aforementioned ‘Oh My God’, which is tasty. Not sure about the video though, it looks like she’s been watching the videotape in ‘The Ring’.