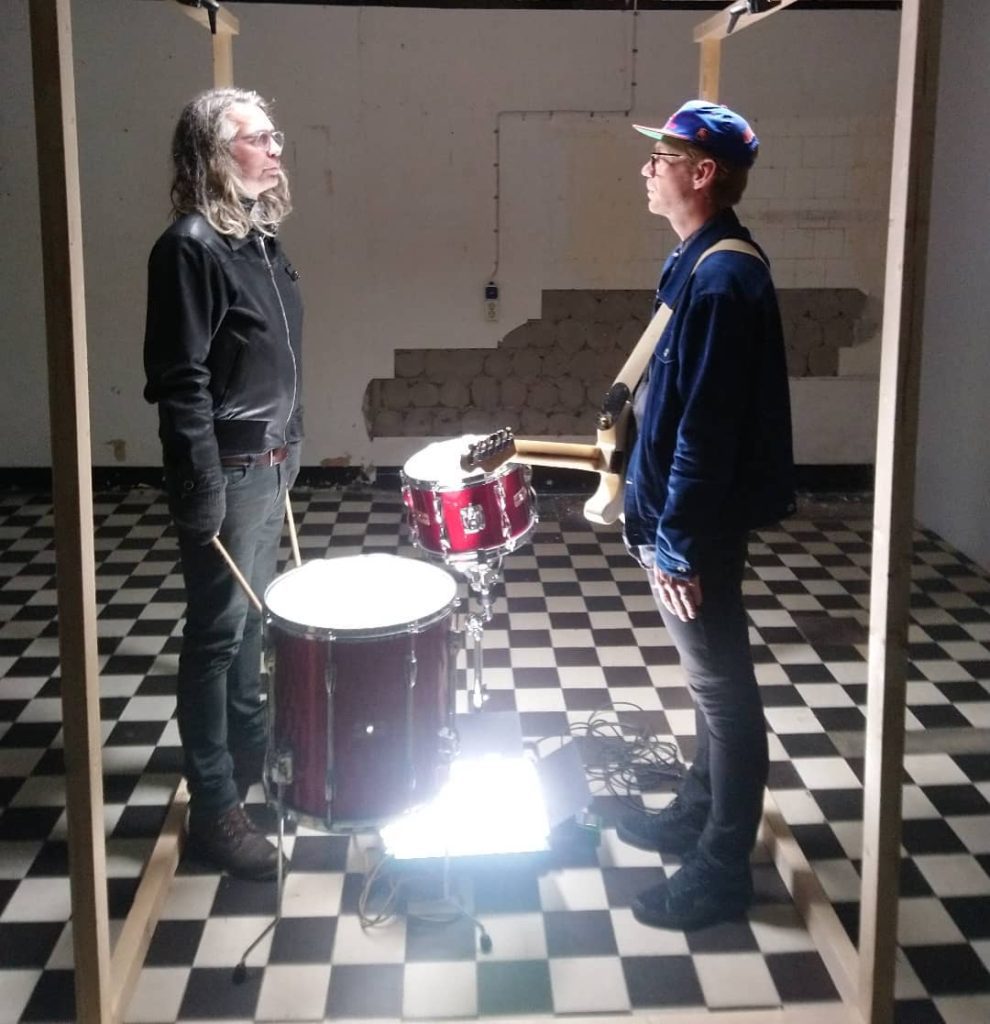 I used up the world’s entire supply of parentheses writing that title but NORD is also known as NORD Orchestra even though they are a duo (there are quite a few bands called Nord), and the title of this track, the third from their debut album ‘Exhausted majority’ which was released a couple of months agois, correctly, ‘Movement (Of a Hand)’.

They are Martin and Tobias (surnames not known), out of Malmö, a tough southern  Swedish city but one which, if I read the runes correctly, is increasingly making waves as a centre for music to challenge Stockholm and Gothenburg.

Just a quick glance at an image of them will tell you they are serious, deep thinkers, perhaps academics. There’s something of Kraftwerk about them. Then you look at the album song titles and the very first one is ‘She was shot in the chest’. Let’s just say it invites some profound analysis in its own right.

But to stick to the matter in hand. NORD chose to release ‘Movement (Of a Hand)’ on New Year’s Eve and they say, “The song is in many ways a reflection on the past year, where factual resistance and disinformation increasingly penetrate our everyday life. But ‘Movement (of a hand)’ is also the story of a counter-movement – on how organisation and knowledge stand over conspiracy and nonsense.”

Separately, on social media they offer a lighter interpretation. It is “A song about present time, flat earth and bus ticket fares.”

It appears to be both, but the underlying theme is a serious one. The lyrics present an argument for the most part in favour of the Flat Earth theory, one which I noticed seems to crop up regularly on Facebook recently along with UFOs, Area 51, whether the Moon is hollow, and the rest of it. Like we’re being prepared for something BIG.

Then it veers off suddenly into seemingly unrelated territory, discussing the mid 1950s Montgomery bus boycott – Rosa Parks, Jim Crow, racial segregation and all – and critically its relevance and value, before switching back to Flat Earth again.

So how are the two connected? As they indicated earlier 2021 was a year of disinformation par excellence and that is apparent whatever side of the political spectrum you lie on. You simply can’t believe anything you read or see online or in the mainstream media, and that probably won’t be changing any time soon either. There’s scarcely a politician anywhere who commands respect.

The key lines to me are “Without those women, there’s no bus boycott/I mean they’re the ones, they make up 80 percent of the Montgomery city ridership/So, without them, who’s gonna walk? Who’s gonna stay off the busses? Right.”

So is the moral that it is only the vox populi, the exhausted majority, which will change anything? Is it a call to arms?

Musically, the song is presented with a sampled voiceover of the same variety and timbre as the Frank Maxwell/Peter Fonda exchange in The Wild Angels, (“Just what is it that you want to do?”) laid over a simple but melodic exchange between guitar, bass and drums which rises in intensity through to the conclusion. It’s brutally honest, right down to an undisguised cough half way through. What is that, a nod to Covid?

It is commanding and impressive stuff that will inevitably prompt you, as it did with me, to seek out the album, and a few surprises with it as “we meet (in an11-chapter insight into our contemporary society) an eclectic set of protagonists giving their narratives on human fears and gated communities; on conspiracies and solidarity; on not fitting in or being forced to fit in…”

I was complaining only the other day about a lack of protest songs. Just like the Montgomery busses it’s looks like we waited forever for one then 11 came along at once.