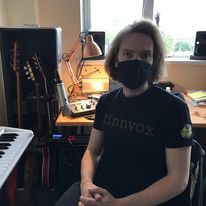 While we’ve had a couple of ‘big names’ here recently our first aim at NMC is to bring otherwise unknown or barely known artists to your attention and in that tradition here is Finland’s Oskari Halsti.

He hails from the forests of Nuuksio National Park in Finland and is currently based in London, where he’s a student I believe and he started working on his own music when he moved to the city in the midst of the pandemic, having worked with various bands and artists in Finland for years.

They include Scandinavian Music Group, Wedding Crashers, and Rules (a regular band here).

I like his sense of humour. His Facebook page shared an April Fool’s Day joke:  “What is a trumpet player’s favourite food? Brasspberry pie.”

There are several musicians who are notably funny in their onstage act. Angel Olsen (dry as dust), Emmy the Great and Laura Mvula come to mind. (Note: All female!) One day I’ll write an article about them. Perhaps Oskari is one of them and he could help redress the balance.

There’s nothing funny about Covid though and it seems he got a dose of our favourite malady recently (welcome to Plague Island, Oskari), becoming one of the 1 in 13. It prompted him to “record a lonely jam inspired by ‘unprecedented times’ blues.”

‘Sad Party’ is not only the song title; it is actually the genre he has invented, and it’s a novel one. The song starts off sounding like the warm-up act for Jean-Michel Jarre (for well over a minute) but then flies off in a different direction, a pop ballad.

The song’s ok musically if a little on the short side, but I was more impressed with the lyrics, some of which are acutely observational. How about:

“How do I know what’s a fact?/When we all have our own/On the screen of our phone” and,

That’s clever. You can read many current events into those lines and still find others. I get the distinct impression Oskari is a poet and comedian dressed up as a pop singer. The Volodymyr Zelensky of Finnish pop.

Physically, I noticed a similarity in some photos with another regular in NMC, his compatriot, Forwardman. But in this video he’s somewhere between Badly Drawn Boy and Benny from Crossroads.

He says there’s more to come over the spring months. Bring it on.