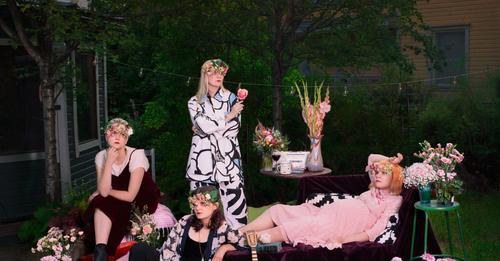 Finland’s ‘reverse super group’, Pintandwefall, (some of the quartet have spread out into other bands or chanced their arm as solo artists rather than merging inwards) have released their new (and seventh) album, ‘Seventh Baby.’

We’ve already covered a couple of tracks from it and I wanted to search out something a little different for this third and final appraisal. The previous one, ‘Final Minutes’, is probably the most tuneful and pop-like on the album and a little shoe-gazey to boot.

Something I have noticed about the four ‘pints’ as they call themselves is that when they do rock there are often shades of Hazel O’Connor in what they produce. Think of O’Connor in her ‘Eighth Day’ persona and you’ve got it. Hm, seventh baby and eighth day, we got us a numerical convoy.

And that’s why I selected not one, but two pop-punky tracks here, both of them with O’Connor-ish semblances. The first is ‘Hard Work’, a song “with bottled-up negative thoughts, whiplashes and heavy guitars” as they say. And as I say, the guitar part here is superb. No fancy shredding, just a simple highly effective and slightly mysterious (think for example of Oakenfold’s ‘Ready, Steady, Go’) riff which drives the song along unflaggingly.

The other is ‘Dust Maker’, which carries a heavy burden right now as a song in which “The narrator suffers from white saviourism while taking their privilege for granted. Just for the image they believe they’re doing their part. It’s a pose.” It moves along an even more frenetic pace, offset by a disarming pop harmonisation, the bass rattling like a machine gun.

Sometimes I think there’s nothing these ladies couldn’t do if they put their mind to it.