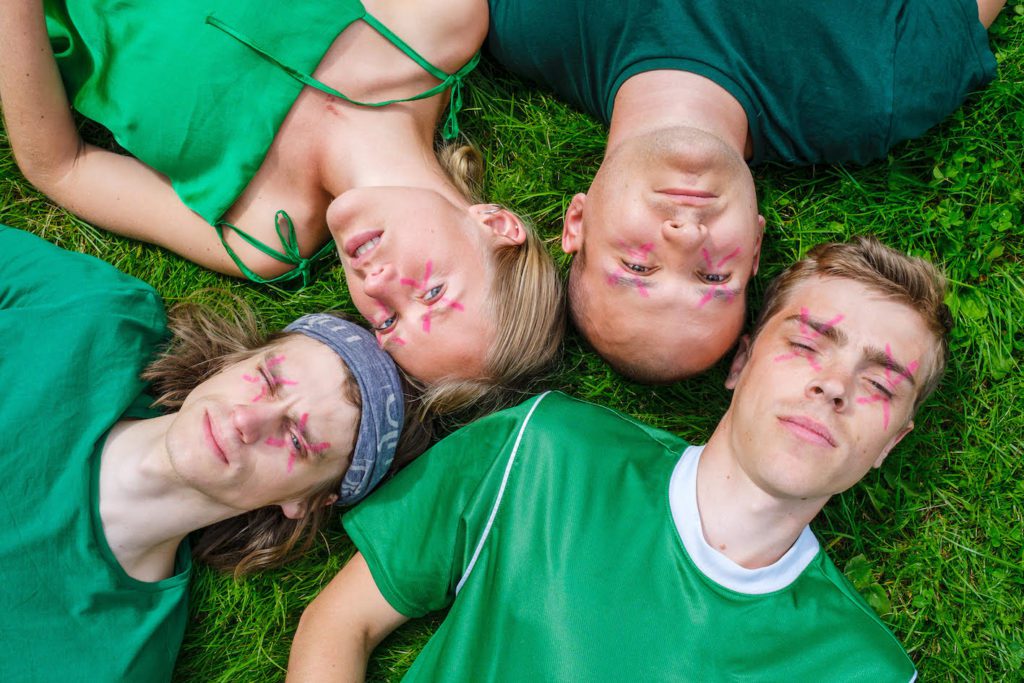 With two albums under their belt now Pom Poko are gearing up for a new EP, ‘This is our house’ scheduled for 28th January, by releasing this track, ‘Enduro Corner’, from it.

Reading between the lines this seems to be something of a watershed moment for them. Their debut album, ‘Birthday’, was a ferocious piece of anarchical pop-punk math rock if you can untangle the multiple genres in there, winning them many new fans in the UK where they’ve done a lot of touring, and still do.

It had everything: power, majesty, strong melodies throughout, massive anthems such as ‘Crazy Energy Night’ and ‘If U want me 2 stay’, which they typically run together into an awesome single eight-minute piece live, ballads like ‘Blue’ and ‘Honey’, manic jams but with a sense of purpose, pure pop with a catchy toon (‘Peachy’) and so much math rock it’s like every algebra, geometry, trig and calculus class you ever attended rolled into one.

Most importantly, it had immediacy. It belted you in the face then grabbed you around the waist like a martial arts fighter. It told you, this band is very different.

That recognition came courtesy of the album, their combined technique, a supremely lively stage act, and the unconditional support of a couple of British radio DJs.

On their second album, ‘Cheater’, released this time last year, there was the same bunch of mathematicians but somehow the equation didn’t get squared this time out. It was as if they were going out of their way not to be seen to be trying too hard to avoid negative ‘second album syndrome’; as if they were too cool for that.

But what actually happened in my view was that melody was in comparatively short supply, there was too great a structural similarity between the songs, and they were overly and unnecessarily complicated at times, with excessively complex syncopations. It failed to achieve the cohesive whole of the first album while crucially lacking its urgency.

Having said all that, it wasn’t a bad album; it just didn’t quite match up to ‘Birthday’ and the second album prophecy was fulfilled.

So where are they going with this EP? Back to basics? Or off in another direction? Seemingly neither. They say, “This EP is both an afterthought and a peek into the future for us. We are combining new recordings of old songs, old recordings of old songs and new recordings of new songs on it, and it’s kind of a demonstration of all the different identities we feel that Pom Poko can have; hammering fuzz-rock grooves, soft and yearning melodies and deconstructed noisy explorations.”

Well, let’s deconstruct that. Firstly, there are only four tracks so two of them must be old songs either released for the first time or rehashed, leaving just two new ones.

The comment about it being “a demonstration of all the different identities we feel that Pom Poko can have” does slightly concern me, as if it’s some sort of market research tool to gauge the reaction of their fans and help formulate their future direction.

I’ll tell you what I’d like to see, and I have a feeling that a fair few of their fans would concur, and that’s a four-track revisitation of where they were with ‘Birthday’. That was my Album of the Year a couple of years ago (and not just a Nordic one either) and if I was choosing again today I’d make exactly the same selection. It defined a unique band; to this day I can’t think of anyone to compare them with and ‘Birthday’ offered up all those different identities anyway.

So what of ‘Enduro Corner’?

The band’s comment on it is, “While in Italy we watched a movie called Free Solo, about a guy climbing a huge mountain without any ropes, and Enduro Corner was the name of a part of the route he was climbing. This is quite a soft and mellow song for us, but we tried to shape it in an interesting way without it becoming too soft and without ruining the nice nerve we thought we had created.”

(As an aside I checked out a photo of ‘Enduro Corner’ and had vertigo while I was sat down).

It’s certainly a little different. They can do ‘ballads’, albeit scientific ones, and this is as close as they come to one, with possibly the simplest melody Martin Miguel Tonne has ever picked out on his guitar  (with oriental tones in parts), an equally basic bass line and no thrashing from Ola Djupvik behind the kit. There’s nothing at all manic about it. It reminds me a little of ‘Like a Lady’ from ‘Cheater’.

It’s tuneful, pleasant on the ear and Ragnhild delivers her lines as sweetly as ever although I can never tell what she’s singing about so I can’t comment on the lyrical content.

There’s nothing to dislike but the one thing it isn’t is demanding. Pom Poko made their name by pushing the envelope so far it came out of the mail box’s backside and they really ought to be continuing to challenge their listeners, shoving them brusquely outside their comfort zone. They aren’t really doing that here.

All of which leaves me none the wiser about that ‘future direction.’ Perhaps the EP will shed a little more light.

Pom Poko tour quite a lot. There’s another UK tour coming up, in two parts and starting at the end of this month, sandwiching a North American one. There are numerous smaller independent venues on the tours. For details see their social media.