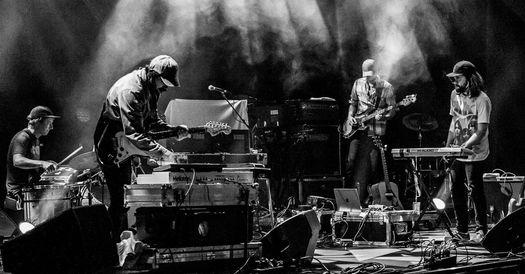 A return for Rural Tapes (Arne Kjelsrud Mathisen) whom, I recall, featured in last year’s NMC ‘Singles of the Year’ list with what I described as being like a little alt-rock symphony, called ‘Pardon My French.’

He is a veteran of several highly respected bands including I Was a King and the bi-continental collective The No Ones with R.E.M. members Scott McCaughey and Peter Buck.

This time it is a new single, ‘Waltz for the living dead’, taken from his forthcoming second album ‘Inner Space Music’ which is out on November 18th via Smuggler Music.

I’ll be honest the title didn’t attract me if only because it subconsciously reminded me of the worst film I ever saw, ‘The Living Dead in the Manchester Morgue,’ although Romero’s ‘Night of the Living Dead’ has a deserved cachet I suppose.

It actually is an instrumental waltz, thought not of the variety you’d expect to see and hear on Strictly Come Dancing. It’s a slow builder with the disturbing mood you’d associate with a James Bond movie filmed in the Caribbean – Live and Let Die, say – where Bond is pitted against some sort of weird voodoo gangster. It could easily represent a procession of the houngans to pay homage to the Granmet.

It definitely isn’t something of this era. He mentions the 1970s as a reference point and I wouldn’t disagree with that.

I said in the 2021 Singles of the Year article that he used a ‘melange’ of instruments and he does so again here: strings and doom-laden brass including trombone and tuba, interspersed with synthesisers and even a mellotron, which I haven’t heard since Tony Banks played one for Genesis.

There is a great deal of variety in his work. His last single, the eight-minute long ‘Arkestra piece for hard-working ants’, mixed krautrock and jazz.

For ‘Inner Space Music’ we are promised “references that can also be found in the realms of Can, Raymond Scott, far out George Harrison and Joe Meek, in a grandiose collection of 10 tracks” while it features contributions from the aforementioned Buck and McCaughey as well as PJ Harvey saxophonist Terry Edwards.

The music on ‘Inner Space Music’ was composed and recorded during one intense month in January 2022 in Mathisen’s own studio Nygrenda Vev & Dur in Norway.