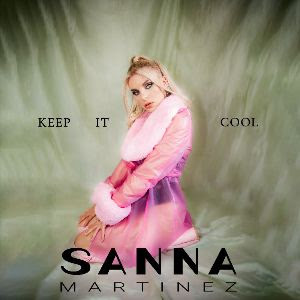 Sanna Martinez has an international name and I’m guessing she’s something of a polyglot too, having co-written songs for the Icelandic national final to select their entry for the Eurovision Song Contest, sung behind Isabell Otrebus in the Polish national final, and participated in the Swedish national final of Melodifestivalen, the competition which selects Sweden’s entry.

One of her creations was placed in the TV show Love Island USA, she’s collaborated with various artists in Los Angeles and she’s a graduate of Musikmakarna, the prominent Swedish song writing school

While her songs broadly fall into a mainstream pop/R&B bracket and typically fall outside our usual remit I was attracted to the notification that she usually writes a message into them, for example female empowerment, self-love, and positivity and that she “wants people to feel good when listening to her music.” In fact, she insists in the song that “self love ain’t overrated.”Well, I’m fine with that. But don’t get too vain!

This track, ‘Keep it cool’ (also the title of her recently released EP) was the one with which she participated in Söngvakeppnin (Iceland’s national final for Eurovision) in March 2022, and which she co-wrote with Swedish, Irish, and Icelandic songwriters and producers.

And there’s a blunter message here, which has been fashioned for someone she used to date because he talked a lot about his ‘exes.’ Her message is that she’s living in the present, moving on up and moving on out if he doesn’t stop. “I keep it cool/’Cause living for tonight is all we need.” “I write the rules/listen up and you’ll get it right.” Atta girl! The ‘Modern Girl’ that Sheena Easton was singing of in 1982. Plus ça change…

Musically, there’s melody a-plenty, a memorable chorus, and a bass line that will loosen the fillings in your teeth and should come with a health warning.

Does it satisfy her desire that people should feel good listening to it? Too right it does. If you can’t shake your booty to this you should check its still attached.

Sanna’s songs are released through the crowd funding platform Corite.