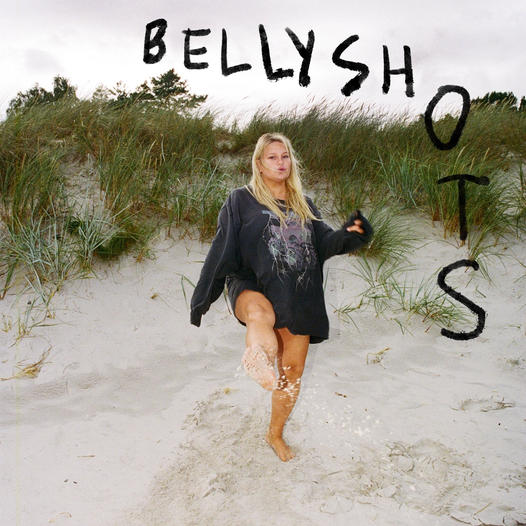 There’s always something a little raunchy about a Sarah Klang song and it’s usually the same with her videos. I remember one from last year in which she was spread-eagled on a bed, caressing a guitar. This one, filmed around a live performance, is a little more restrained but even then several people get to end up in various states of undress. Being around her must be a whole lot of fun.

She’s a big girl with a personality to match and who takes life as she finds it. ‘Belly Shots’ is nostalgic but not cloying, as she looks back at her 20s – “an overrated time” – and what the future holds with mixed views. She’s had a good time for sure – “I was on my way to the top, yeah/Crowd surfing on my back, yeah/Champagne, cherry on the top, yeah” (presumably where she was getting or giving the belly shots) – but there was always something more meaningful just over the rainbow:

Stylistically, it’s a melancholic piece of Swedish-Americana, true to her long-established persona as the Sad Girl. She isn’t alone in perpetuating that approach, there are a few others in Sweden, and they do it very well too but you don’t win two Swedish Grammys if you aren’t at the very top of your game.

And that includes her sultry, sexy voice, Gothenburg meets Nashville. The Klang twang.

And if her 30s don’t make the grade for any reason there’s always a future for her in arm wrestling.

‘Belly Shots’ is out now on Pangur Records, while the album, her fourth and which I understand will be called ‘Mercedes’, is scheduledfor a 2023 release.

If you’re hoping to see her in the UK (who isn’t?) then you just missed her, she was here in March. A full Scandinavian tour, including some festival dates, is about to get underway.