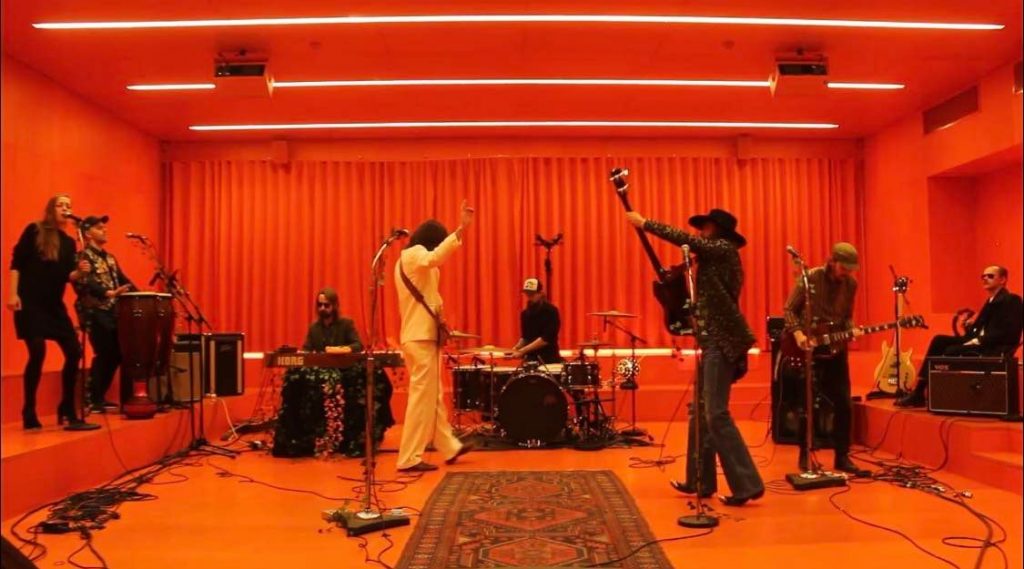 I’m always attracted to bands with ‘Weavers’ in their name. In the northwest of England we have the Houghton Weavers, who rose to fame with ‘The Martians have landed in Wigan.’

Denmark’s The New Weavers have no propensity towards a close encounter with extraterrestrials. Rather, their concern is with septuagenarians, an age that most of the musicians they seek to emulate have attained. At the very least.

Those bands include the likes of The Rolling Stones (now more than ever The Strolling Bones), Creedence Clearwater Revival and Faces, all of which rose to prominence in the late 1960s and early 1970s.

It’s unusual for a band to set out to emulate groups from that era, other than by paying ‘tribute’ to them and merely copying their songs, which is not The New Weavers’ game. After all, to your typical Gen-Z’er they might have been playing in the 1870s, even if it goes over their head that such bands defined the music they’re listening to today.

(That comment from a Boomer, and proud of it).

Anyway, this album, ‘Rock ‘n’ Roll Fan Fiction,’ of which unfortunately I have the time only for one sample track tonight, comes on top of three single releases that galvanised the Danish music press to identify the band’s music as a “hopeful defibrillator for rock music.”

I didn’t know it had had a heart attack but I guess it must have been suffering from depression these last few years.

And those septuagenarians won’t be flat-lining when they hear his album, which really does rock.

It was hard to select just one song. The oh-so-apt title of some of them alone was enough to tantalise, as with ‘How you doin’ Maggie?’ which sounds like Rod Stewart meets Joey out of Friends, and which does have a distinct ‘Maggie May’ feel to it.

And ‘Revolution’, which sounds more like Thunderclap Newman than The Beatles.

I almost opted for ‘Santana’s Lick Stick’ which definitely perpetuates the spirit of Carlos and the boys while, peculiarly, ‘Legs’ made me think of Pan’s People, the leggy dancers on Top of the Pops in the 1980s, which was succeeded by Ruby Flipper and then Legs & Co. Ah, sweet memories.

Eventually I went for opening track ‘Don’t make a scene’ partly because it is one of the tracks already released, which gives it legs.

The opening riff is pure T. Rex, (think ‘Get it on’) a bandwhich was of course active during their preferred period. And I’m sure I can hear a Hammond C3 organ chirping away in the background, a mainstay of so many top bands of that era so regrettably pensioned off these days in favour of the dreaded synthesiser.

In their publicity they say “Many bands have failed in attempting to recreate the sound of the golden age of rock music, but somehow The New Weavers manage to strike a balance between nostalgia and authenticity. Rock-savvy listeners will be quick to catch the references to the gallery of characters who ruled the charts in the 60s and early 70’s.”

Too right pop-pickers, that’s exactly what they do. And very, very well.

You know, when I read the comments on YouTube music videos I often see those from youngsters saying, for example “I am 12 years old but I’m sick of Dua Lipa and Ed Sheeran. My dad put this 1970s rock song on and I think it’s great. So do all my mates.”

The world is ripe for a resurgence of that 1970s sound and if The New Weavers aren’t careful they might find themselves leading the revolution.