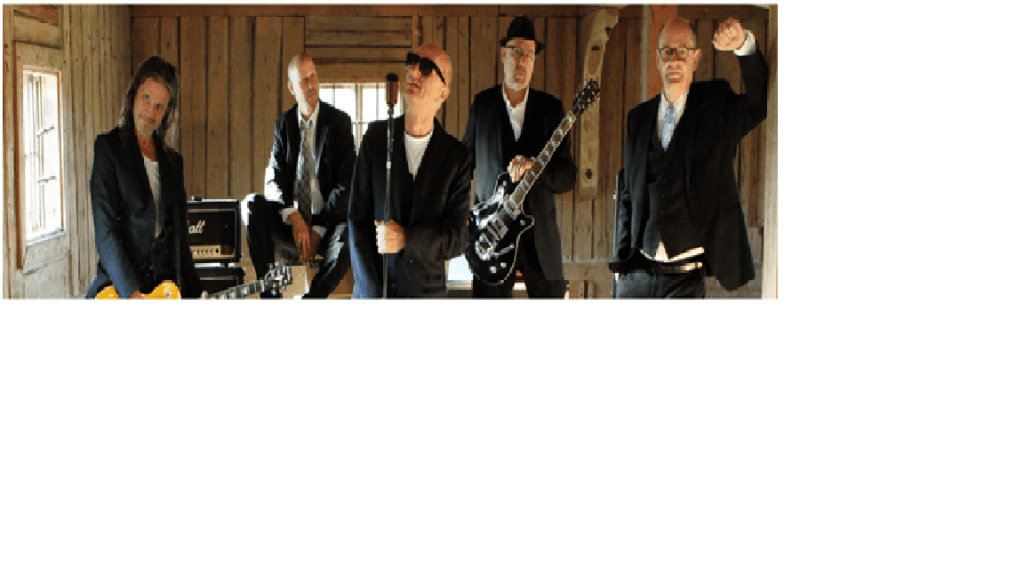 There was a Video of the Week only a few days ago, the rather tasteful and attractive Loreen, but with no new releases to scrutinise and as it’s another year already let’s throw in another one.

Almost DEAD MEN are a bunch of time-served musicians (I won’t call them old geezers even if they’d probably like that!) formed in 2017 out of Uppsala, Sweden’s fourth largest city, I believe. Uppsala was at the centre of the Swedish punk scene in the 1970s, which sort of dates these guys. The band members come from Uppsala bands that include Rävjunk, Stain, The Sleep and N-Liners. That’s N-Liners not Flat Liners.

The ‘almost dead’ is clearly tongue in cheek; these old lads have plenty of life left in them yet although the way lead singer Sören Andersson is lit in the video he does a passable impersonation of Grandpa in The Texas Chainsaw Massacre.

Their website image (I managed to take a copy of it of sorts; I hope it doesn’t infringe their trademark patent) is telling. It could be the cast of a Scandi Noir cop show. There’s the corrupt politician, the hard man/villain, and the quiet, lonely but determined cop who always gets his man. All that’s missing is a pretty girl in a Faroese sweater or leather pants. Meanwhile, in the video, it looks like they are the gang that gathered to commit the Great Train Robbery in the UK in the 1960s.

And Sören Andersson manages to inhale cigarette smoke and exhale it again perfectly in time with the metre of the tune, like a synchronised swimmer.

They are evidently skilled at creating a strong visual image, but what about the sonic one?

They are billed as ‘post-punk’, ‘postmodern punk’ and ‘post-punk rock n roll’. Post-punk as such only really lasted 15 years or so, mercifully ebbing away before the styles that punk was being merged with included prog; the one it replaced to start with. I reckon the ‘pp-rock n roll’ allusion is the most accurate in this case and I’m all for it.

Both the main riff and the lyrics are almost painfully simple. The latter make Johnny Rotten seem like Shakespeare. There are a couple of wonderful repeated lines – “Cruising around, it’s my life/cruising around it’s my wife”.

There’s only a couple of chords and key changes in it but about half way through, when the tempo picks up, just for a moment they reminded me of Carter USM on ‘Cheap ‘n Cheesy’. That will do for me. The moment I start comparing them to the doyen of the post-punk tradition you know they’ve cemented their place in my heart.

And I’ll tell you this (to quote a famous line from Carter). If anything is going to tempt me back to a live show venue while Britain basks in a world record Covid infection rate it wouldn’t be Ed Sheeran and Elton fricking John. It would be this.