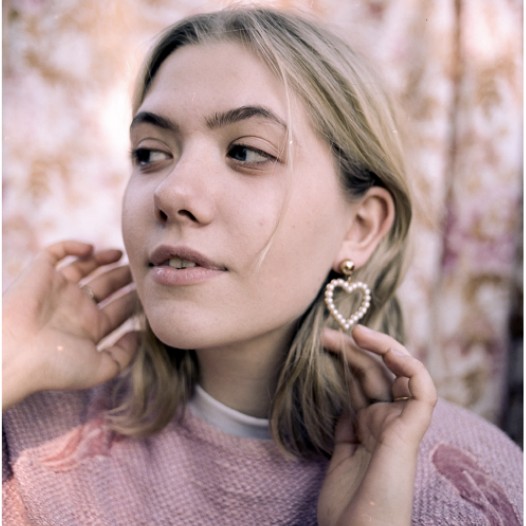 Video of the Week – Bo Milli (Norway) – At the wheel (single)

Funny isn’t it how things have a way of coming around. Only a couple of weeks ago I ran a feature on which was the greatest ever all-female band, narrowing it down to one contender from Norway and the other from the U.S. The latter was The Go-Go’s and as all their fans know when they broke up Jane Wiedlin went solo and her first song was ‘Rush hour’, from which a key chorus line is, “Baby, when you’re at the wheel…”

Small world or what?

But in this case the Bergen-based Bo Milli (a deconstruction of her real name Emilie Røine Østebø), isn’t at the wheel of anything tangible. She’s sat at a bus stop that could double as a nuclear bunker, in the middle of nowhere; having a smoke while she’s waiting for a bus that probably will never come anyway. There’s only one a day and she just missed it. In the UK there wouldn’t be one at all. Driver called in sick.

What she really is “at the wheel of” is her own coming of age, the transition from child to adult, her ‘responsibilities to the planet’ and whether or not she can step up to the plate (“we go out drinking while the world dies”) stacked against the realisation that she has no power to do anything about it anyway. The keys she can’t find are a metaphor for her hopelessness.

I get the impression she’s a bit of a frustrated eco-warrior. But don’t worry, chuck. The Earth’s been about to burst into flames for as long as I can remember and we’re still here. Chill and have another fag.

Hence the apparent aimlessness of the video, an image she conveys very well.

The style she adopts is a little lo-fi and while it isn’t garage music her band plays out of one. The costs of studio time these days, eh.

The PR draws comparisons with Soccer Mommy and I subscribe to that and even Bo’s physical appearance isn’t too dissimilar from that of Sophie Allison. My only concern about her vocal delivery is that it is a little weak and could get overwhelmed by her own guitar, bass and drums in a live show. She’s appearing at the By:Larm showcase event in Oslo later in the year in front of the industry’s great and good (and me) and  that will present a good test for her.

The song is a routine 90s style non-anthem but the chorus, simple as it as and built around a straightforward ‘hey, ya hey’ is catchy as hell.  And ‘hey ya’ didn’t do Outkast much harm, did it?

Bo has an army of industry names behind her, including her management company, which also looks after Sigrid and AURORA, while the song was co-produced by Odd Martin Skålnes (Sigrid, Sløtface, and AURORA).

I’m also reminded that a couple years ago I reviewed a track by Lokoy (the bassist for Sløtface) from what was then his forthcoming debut solo album. The song was ‘A Mistake’ and it was written by Bo (as Emilie Østebø). I said at the time, “I have to admit that as much as I like Sløtface I’ve never really been able to get into Lokoy’s rather abstract solo work so far. This is different.”

Then, “The song arose from original work by Østebø which she demoed at Lokoy’s home studio with the assistance of Sløtface guitarist Tor-Arne Vikingstad. It seems she was a support act for Sløtface some years ago (so how old was she then?) and they regarded her very highly even at that early juncture.

And while Lokoy’s trademark bass is again evident here the song owes much to that guitar work, synths, a strong melody and her vocals; it really is the Østebø show.”

There you go – small world, again.

Expect more music from Bo Milli as the year progresses.