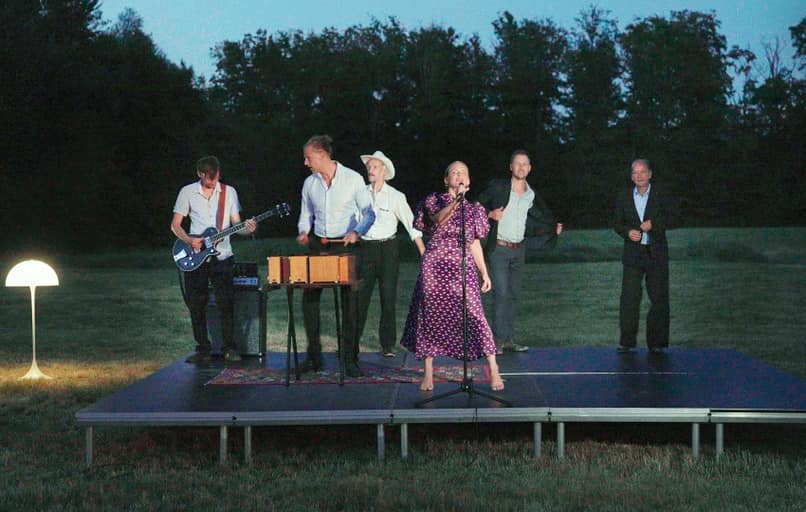 While the essential purpose of NMC is to showcase up and coming artists, occasionally we do throw in a ‘big beast’ and Emiliana Torrini fits the bill, in the nicest possible way. The Icelander has previously teamed up with Belgian duo The Colorist Orchestra, one that is “in search of the thin line between pop, underground and experimental classical music” and whose “fundamental idea is to rearrange the repertoire of an invited singer-songwriter,” and here she/they do so again in advance of an album, ‘Racing the Storm,’ which is due out next year via the Bella Union label to which they have just signed.

The album is of original material and seeks to blend The Colorist Orchestra’s classical chamber pop with Emiliana’s odd mix of power and fragility.

I have to admit I don’t know a great deal about Emiliana other than her Icelandic-Italian background, the fact she was discovered singing in a restaurant, that she’s written and performed across a wide range of styles (electro-pop, folk etc), fronted GusGus, co-wrote a Kylie Minogue song, performed a version of Jefferson Airplane’s ‘White Rabbit’ and sang the final credits song for ‘The Lord of the Rings: the two towers’.

I have seen her live, at the last Iceland Airwaves, where she came on to support another well-known local, Pétur Ben, but the couple of songs she contributed to were not sufficient to form any substantial opinion of her. This video is.

I was surprised at how Björk-like she is (again in the nicest possible way) in both the voice and the mannerisms. The laid back style she appears to have evolved into for this album is complemented perfectly by The Colorist Orchestra and there’s a vibe about the video performance that is reminiscent of Peter Gabriel’s ‘In your eyes’, and how it was done during his seminal 1993 Secret World tour.

She describes it as a love song, “coming from a daydream space, a safe haven from the everyday craziness of the world — and ending in the silence and serenity of the night. It speaks about what it’s like to endure and then finally thrive in a long-term relationship.” (Which is essentially what Gabriel’s song is about. Great minds think alike).

Many versions of the song were made before, collectively, they settled on this, one of the earliest ones.

The album ‘Racing the Storm’ is due out next year. (I thought she was Torrini, not Tornado!)

A mainly German tour will take place next March with just one date in the UK, at London’s Union Chapel, on 31st March.