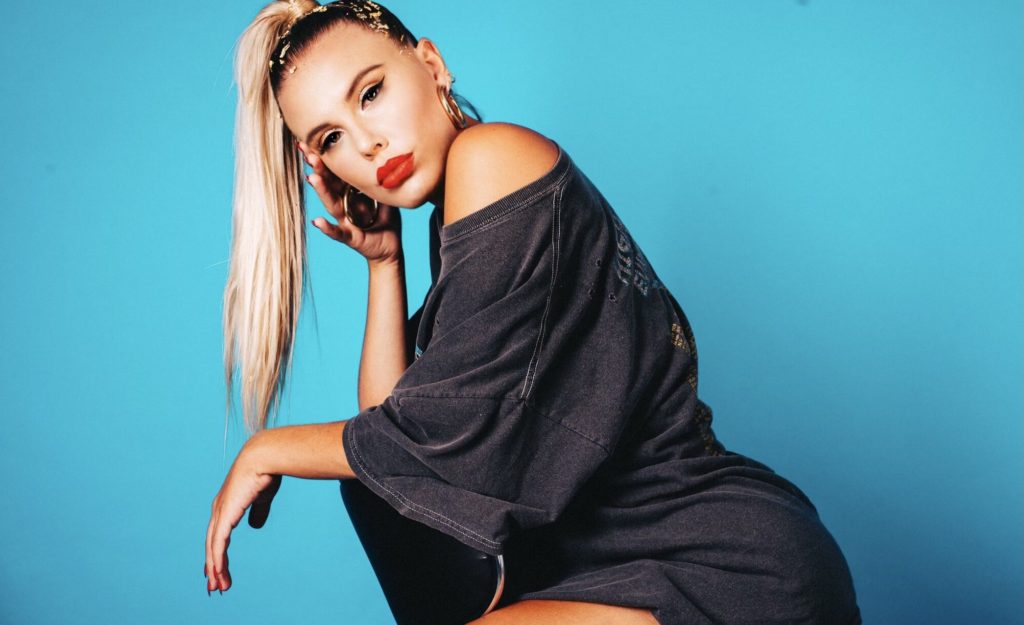 Bella Skyller – now there’s a name to conjure with. You could easily mistake it for ‘Helter Skelter’ and hot-footing it across the world is exactly what the Swedish-born chanteuse from the small town of Helsingborg chose to do three years ago when she threw herself headlong into the ultra-competitive, make or break entertainment world that is Los Angeles, moving from a close up view of Hamlet’s Castle, Elsinore to the Sleeping Beauty Castle of Disneyland, Anaheim.

It’s takes oodles of self-confidence and daring-do to do make such a move that and it has paid off as Bella has established herself in La-La Land with her own individual musical style which draws largely on classic pop flavoured with R&B.

Now she returns to Sweden, having completed a business communication and leadership course, while also graduating from the ‘Independent Artist’ programme at the Musicians Institute in Hollywood; perfect preparation for a career in the industry, and also while establishing herself musically with songs like ‘Love me louder’ and the enticing ‘Bedroom Eyes’. The latter was released under her new artist name of Bella Skyller’; in real life she is Isabelle Skyllerstedt.

‘Love me louder’ was discovered by the Sony Music distributed label TGR Music Group and is getting on for a million plays on Spotify.

Bella sang English songs from age four, started writing her own songs when she was nine years old and picked up a guitar and learned how to play when she was 10. It was only since she moved to LA that she had any formal vocal or musical tuition.

She says that when she first began writing music professionally she had no idea what to write about or about what ‘genre’ she was into. Because she listened to all kinds of music she wanted to create a recipe of different genres, combining different styles to make her own dish, but sensing that where she belonged was in the ‘dark pop’ world.

Her songs are about love in different forms – including physical, romantic, platonic and obsessive, and life as a ‘restless’ girl, writing from her own life experiences, which are many and varied by all accounts (but of course, in LA, what else?), and which make her songs very personal and special to her.

And you can sense those life experiences in this song, ‘Alone with me’; the first she will release on the COMEDIA label in Sweden, on 18th March. She goes through the emotions in the song and this accompanying video, alternately lecturing and snuggling up to the poor lad who is now presumably her ‘ex’ judging from the way she dismissively tosses his photo into the lake as Saga Norén did with her Polis badge into the Øresund Sound at the end of ‘The Bridge’.

Less ‘dark pop’ and more ‘stark strop’ one might argue?

Bella says the inspiration for the song – one of her favourites and one of many she wrote in 2020 – came out of a toxic relationship. That is there for all to hear and see yet she manages to convey the song with a lighter, almost bubbly tone in a major key arrangement which, she adds, show that “the end of the relationship became a happy ending for me.” Someone she thought was ‘The One’ turned out not to be. He must have been a wrong ‘un. Outta Compton?

I’m impressed by Bella’s vocal quality and range, and particularly in the higher reaches, where she can easily sustain a note. And there’s an interesting beat that turns up in the chorus that is worth listening out for.

All-in-all the musical/vocal performance combined with the video is at the high standard that it is often difficult for a newcomer to achieve.

‘Alone with me’ is one of the four songs that will feature on her forthcoming EP that will be released later in the spring.

But before then Swedish and international music fans have the opportunity to see Bella perform this and other songs at the Future Echoes international showcase festival in Norrköping, which is being held from 17th to 19th February. Bella will appear on the 18th, and judging from what we see here the audience can expect exactly that – a performance. Apparently, she has “a wild stage personality”. And to think I’ll probably be stuck in a check-out queue in Tesco while she’s strutting her stuff on the stage.

Unfortunately, we’ve had some problems embedding the video so you may have to copy and paste the link below.