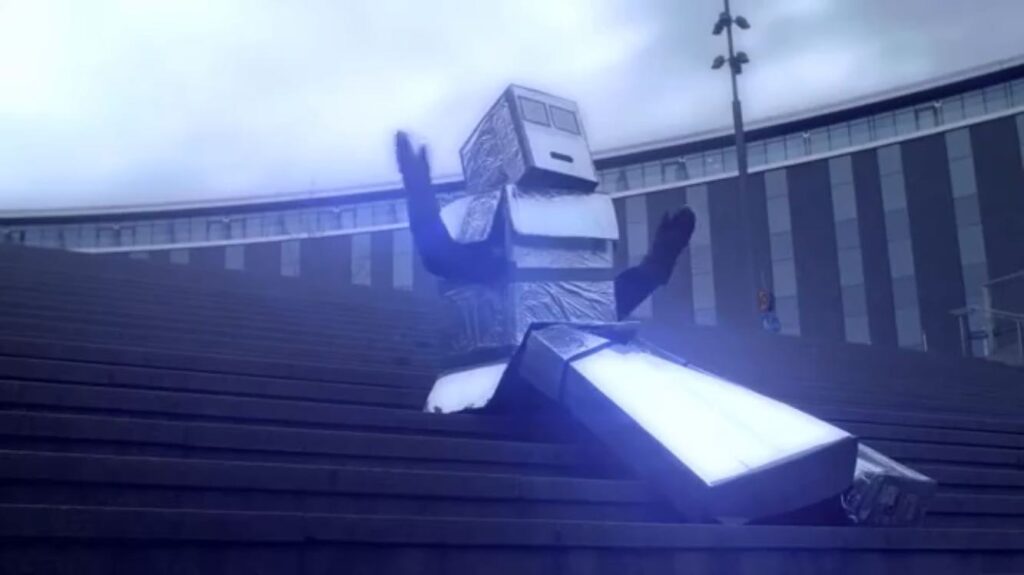 Today’s video follows the release of a new compilation album, ‘21’, from the “avowed eccentric” Mårten Lärka, which is a sort of ‘best of’ album.

One of the tracks is ‘Robot 22’, a subtle remix of a track called just ‘Robot’, which was released in 2015 and as an album track on ‘Alouette’ in 2016 and  picked up by an English publisher for syncs via Universal Music Publishing. Swedish label Comedia released the first single from the album on 1st November and will release ‘Robot 22’ as the second and last new single on November 30th. In between those two dates comes the video.

First off, it’s in French. Now we’re used to (classy) French songs, usually courtesy of our Swedish Francophile friends at Le Lac Long 814. But not one from a guy who looks like he might be the fifth Beatle!

Then there’s ‘Robot’ him/her/itself (apply your own preferred pronouns and who seems unsure judging by the hesitancy in entering the KappAhl shop), and who looks like an austerity Cyberman from Dr Who. I heard the BBC was cutting back on production expenses but this is something else. And its biscuit tin head keeps falling off…

I’m not sure quite what the message is here and I’ve watched the video a few times trying to get a clue. Mårten says the Robot’s only ambition (apart from highlighting itself) was to spread joy and love. All I can say is that the shoppers on the Swedish street seem more than happy to High Five Monsieur Robot and that can’t be a bad thing.

The song is simple, immediate, attention-grabbing, unconventional and catchy. So was ‘Joe le taxi’ and that didn’t do Vanessa Paradis much harm did it?

The lyrics are written by Hamid Khodja and the music written and recorded by Mårten Lärka. Henrik Heinrich at Nevo Studios, Sundsvall, Sweden mixed and mastered this new version, ‘Robot 22.’

Video production by Mikael Svensson, Extended Media, Sweden. It was filmed on location in Uppsala, Sweden, in February 2017.

The reason for this new mix was a publishing deal with the English label Snowhill Songs/Universal Music, for a sync deal. Mårten didn’t have an instrumental version of the track in order so they remixed it. As he says, “this is a great opportunity to share the forever young and never earlier seen music video as well.”