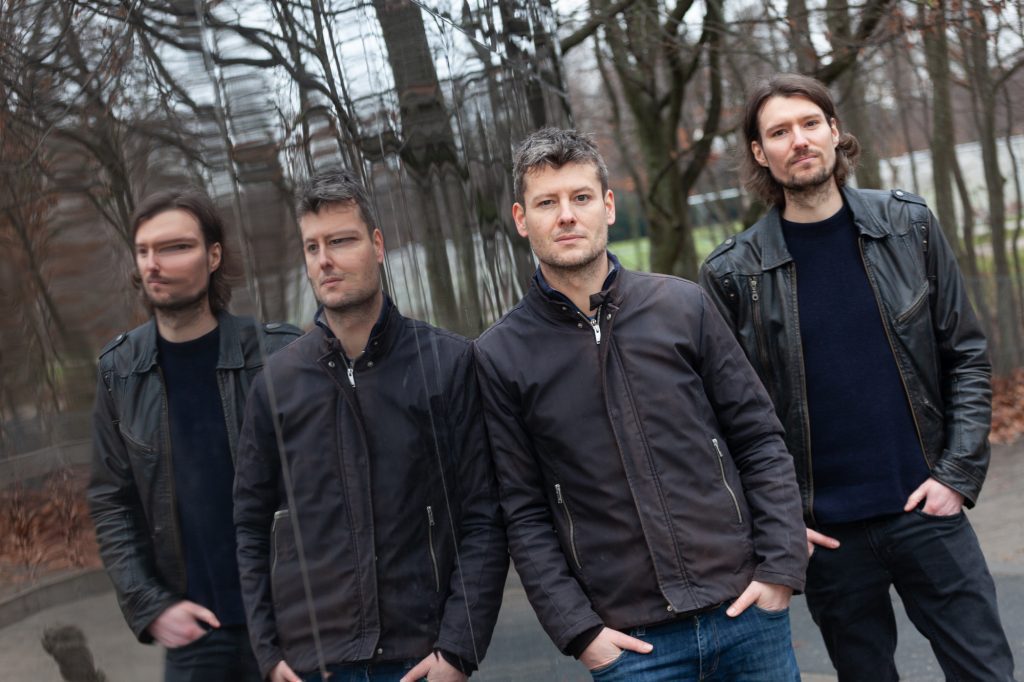 Vinyl Floor (Thomas Charlie Pedersen and Daniel Pedersen) were here as recently as May of this year and the track under review at that time has now found its way to the Copenhagen duo’s fifth album, along, naturellement, with this title track, ‘Funhouse Mirror.’

Album titles like this always intrigue me. I recall how attached I was to Sol Heilo’s ‘Skinhorse Playground.’ They are both mystifying and evocative and always press the right buttons.

As with the previous track this one (and the album) features the Swedish multi-instrumentalist Bebe Risenfors and, on bass, Rob Stoner, who has worked with Bob Dylan.

The conclusions I drew from the earlier review were that while they are billed as being exponents primarily of progressive and experimental indie rock, even symphonic rock, what I heard I would classify more in the way of 1970s Brit-rock for the most part.

So what of ‘Funhouse Mirror’? Well, it’s Brit-pop this time, of the variety that spans two eras and 30 years. You could easily imagine that you’re listening to a Beatles track that didn’t quite make the cut on 1967’s‘Sgt. Pepper’s Lonely Hearts Club Band’, complete with some choice harmonisation and then roughly half way through there’s a tasty little guitar solo that might have been Noel’s alternative for 1996’s‘Don’t look back in anger.’

And that’s a theme that runs through much of the album. It is anachronistic but only in the sense that were it to have been released in either of those earlier eras it would have rapidly climbed the charts in a multitude of countries. Even the vocals are just so apposite.

And at the same time they manage to serve up plenty of variety. ‘Dear Apollon’ is a waltz, ‘Stare, scare’ is 1960/70s prog with shades of Argent and Family, while ‘Pretty predictable’ is pretty remarkable for being able to unite Pink Floyd, Yes and The Sex Pistols in the same song, and after it opens with a jazzy intro that’s right out of the Fiona Apple songbook, circa ‘Extraordinary Machine,’ Charley Drayton behind the kit ‘n all.Has anyone else ever come close to doing that?

‘Death of a poet.’ That’s a Nightwish-like title, isn’t it? It ain’t metal but it brought me diving straight in, instead, to a wonderful hotchpotch of a song that verges on vaudeville at times while even throwing in a pastiche of the accordion backing to Carter USM’s ‘England.’

I won’t go on. Even a brief listen to this high quality album tells me that it’s something you need to check out for yourself, urgently. And the sound quality, as I’ve mentioned previously, is top class throughout.

There are few bands that can channel so many of their earlier peers while fashioning their own space in this manner.