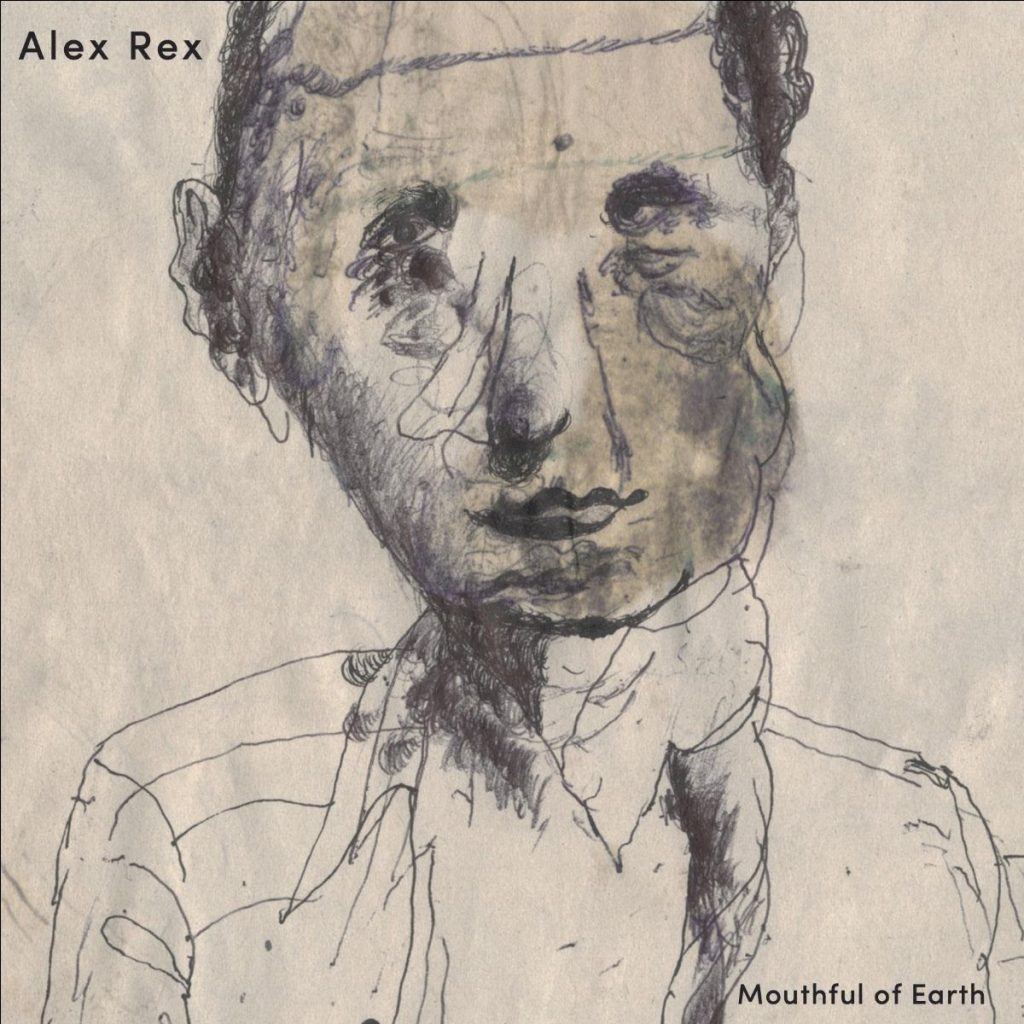 First time in NMC for Alex Rex but I have reviewed him/the band in this and other personas over the last few years. Alex Rex is one of several incarnations, the ‘ghost-rock’ one, of Leeds-born, now Glasgow-based musician Alex Neilson, for a decade or more the chief songwriter, drummer and occasional vocalist for Trembling Bells.

There have been four Alex Rex albums, the most recent, ‘Paradise’, being released last year but the content for the next one, ‘Mouthful of Earth’ (July 2022) was determined even before the pandemic began, when Neilson took a break from the road and set about putting together a record of poems.

‘Mouthful of Earth,’’ which Neilson describes as “a continuous project of describing the human spirit pushed to the point of crisis,” is set to music largely from Alastair Galbraith, Richard Youngs and Neilson’s own experimental drone record ‘Belsayer Time’ (originally released in 2006). This is the first time that this music has ever been made available digitally. It sees him reunite with ex-Trembling Bells lead vocalist and keyboardist Lavinia Blackwall, who now trades as BlackwAll and who put in a shift on his last album too, if I recall.

The first track to be released is ‘Wastwater’ and the title is oh so Neilson. It refers to the relatively unknown English lake of that name, tucked away in the western part of the Lake District a couple of miles from the Sellafield nuclear reactor.

When I first glanced at the title I read it inadvertently as Wastewater, which might be more appropriate and which would fit Neilson’s mischief-making lyricism perfectly.  But, would you believe it, the song is, he says, “a love letter written in light…inspired by the uncanny valleys of the Lake District. I heard the mountains singing it as one vast, orgasmic ‘YES’”.

If you ever fancy a career change Alex I’m sure the Lakeland Tourist Board would welcome you with open arms.

And this does make a change for Neilson, who is one of the most creative, innovative artists in the country. In the past I’ve compared him to the likes of Dylan, Cave, Cohen and Watts and the subject matter here may seem a little bland for someone who in the past has written about homicidal love from the point of view of the killer, the anxiety of childbearing by someone who has never borne a child, and other such mildly esoteric matters.

But he never fails to deliver. Take for example this lyrical string, taken from the midst of the song/poem. (Referring to the lake):

…Its impervious, dissolving authority / to tell you of its quality / so you might perceive it in the black ecstasy of your skin/ in the vast butterfly nets of your eyes/in the taxidermied sparrow of your imagination…”

Sometimes I think Alex Neilson was born in the wrong era. He would have slotted perfectly into the Bloomsbury Group. And since those pre-ordering the album on Bandcamp will receive an exclusive download of Neilson’s take on the poem ‘The Problem with Suicide’ that allusion is perhaps even more apposite. Think about it.

Musically, it’s all over the place. Whatever the music is, it sounds like it’s in 23/7 time and by the Portsmouth Sinfonia while they’re tuning up.

It does convey a sense of something, a sort of eerie calm before the storm, like Ukrainian forces celebrating recapturing another village but wary of what they’ll find there. But that bears no relation to a tranquil English lake.

But then don’t ever expect anything by Alex Rex to be neatly compartmentalised.

Alex Neilson has worked with a cornucopia of musicians spanning many genres; musicians you don’t know but really should do. Continuing in this spirit of collaboration, the album ‘Mouthful of Earth’’s words and music are accompanied by a book of drawings by Kent-based visual artist, musician and art psychotherapist, Benjamin Prosser.

It will be released on limited edition vinyl (300 copies only) and digitally via Neolithic Recordings on July 1st.

There is a tour taking place right now until 22 April and then picks up again in June.