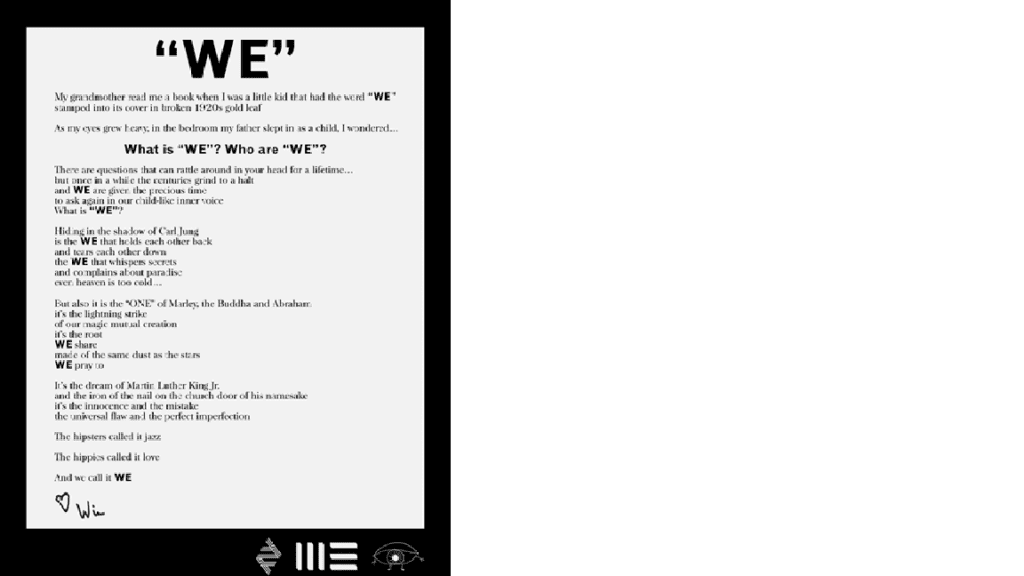 I was intrigued to discover this week that Arcade Fire will release a new album, ‘We’, their sixth, on May 6th and have prefaced it with a first single from it, called ‘The Lightning I,II’, which was released on 17th March. In order to keep up with events (because this is fairly momentous) I’ve brought the Weekend Intermission section forward by 36 hours.

I’m ‘intrigued’ because I honestly thought Arcade Fire would have called it a day by now. It was over 10 years ago that Win Butler said he was sure he wouldn’t “still be doing this” in 10 years time. Such is the (apparent) strength of his political convictions that I became convinced he would go into politics, along with his wife Regine Chassagne and possibly in Haiti, Chassagne’s homeland. (Well if Wyclef Jean could run for president there, why not Regine)?

On top of that the last album, ‘Everything Now’, released five years ago, didn’t exactly find popular favour with everyone.

But here they still are. Some of the members (Will Butler, Jeremy Gara, Richard Reed Parry, Sarah Neufeld – although she is technically an ‘ex-member’ now, limited to live shows) having released solo work over the last few years, it seems Win Butler was quietly beavering away before and during the pandemic writing two or three albums worth of material. Latterly the band has been up to its usual tricks of taking out selective advertising in certain cities – London is one of their favourites – carrying strange images and messages. In this case it was one of an eye with the word ‘unsubscribe’ written beneath it.

For about six or seven years I followed Arcade Fire religiously. I even went to Sweden just to see them during the time that I was discovering Nordic music. (And did you know, just as an aside, that doctors in Stockholm saved Win Butler’s life when a severe throat infection made it difficult for him to breathe during the ‘Neon Bible’ tour)?

During that period they won (2011) The Grammy Award for Album of the Year – the industry’s ultimate accolade – for ‘The Suburbs’ although I don’t believe that is their best album; rather it is ‘Neon Bible’.

Then, they began to lose it. Perhaps it all went to their heads. They even began to wear huge bobble head props on stage.  Shows became overly extravagant just as the prog-rockers had done 40 years previously, while the on stage musicianship deteriorated, demonstrating that nothing had been learned. They resorted to dance music on their next album, ‘Reflektor’. Some of it worked, some of it didn’t but whichever way you look at it, it wasn’t what was expected of Grammy winners. Then came ‘Everything Now’ which, with the exception of a couple of tracks, was a flop, even if it did bring in some new fans. They took on the appearance of a band which belonged in a different era.

And that is why I’m glad to report that they seem to have taken a step back into the first half of the 2000s with ‘The Lightning I,II’, to the days when they were writing powerful, meaningful, indie rock songs. ‘The Lightning I,II’ could have been on either ‘Funeral’ or ‘Neon Bible’, their first two full-lengths.

The album is divided into two sections, ‘I’ and ‘We’, possibly Covid and post-Covid if you like although we haven’t attained the second part just yet and ‘The Lightning I,II’ is the first track in the ‘We’ section. So ‘I’ represents isolation and the loneliness that goes with it while ‘We’ epitomises the thrill of reconnection and especially that of skin contact.

Now that is something that just about everyone can relate to and Arcade Fire haven’t missed a trick here even if many other songwriters are dealing with exactly the same sentiments in their work.

The song kicks off with a memorable melody from the word go. Regine is quickly pounding on the keys in a manner similar to that of ‘Rebellion Lies’ while Win motors along like The Boss in full flow before it goes off into an almighty instrumental outro. There’s a distinct absence of the synth overkill that began to permeate their work even on ‘The Suburbs’ – it’s almost like an acoustic statement and Win wields around – and ultimately smashes – an acoustic guitar carrying a message just as he did with the one bearing the Haitian Creole proverb ‘Sak vid pa kanpe’ (an empty sack can’t stand up) on Saturday Night Live at the end of ‘Intervention’ in 2007.

But then again, so do the rest of the band with their instruments. Cynics will no doubt interpret this as signifying the end of Arcade Fire. Like Butler’s 10 years is up.

I’m not going to try to interpret the meaning of the song. It looks like this is a concept album of sorts and the ‘meaning’ will be found in the whole, not the individual parts. But I’m fascinated by the twister in the video and what it signifies and why in a song that may be about reconnection and rehabilitation (“We can make it if you don’t quit on me; I won’t quit on you”) there are lines like “Tires are burning in the middle of Rodеo Drive”.

And the opening part of the video, where the album title appears to be the monolith in 2001 – A Space Odyssey until it turns on its side, suggests they haven’t fully forsaken bombast. This message from Win Butler about the album suggests much the same.

Still, it’s good to see Arcade Fire back on good form and if this track is representative of the album many of the bands early fans are going to be very happy.

The line up for the album appeared to be the one dating back to the ‘Neon Bible’ era: the two Butlers, Regine Chassagne, Richard Reed Parry, Tim Kingsbury, Jeremy Gara and Sarah Neufeld. At least Neufeld is on the video, looking about 10 years younger than she is (as does Chassagne) while Will Butler and Parry aren’t. I didn’t think anything should be read into that, that it’s probably just down to availability but now I learn that Will Butler has left the band “for new things”. The additional personnel here are Dan Boeckner and Paul Beaubrun.