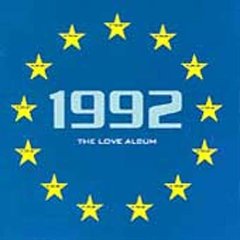 I’m slightly late with this one as it’s Monday but no-one knows what day it is around Christmas and New Year so that’s my excuse and I’m sticking with it. And in this Weekend Intermission we combine it with the ‘Down Memory Lane’ feature.

Writing about Swedish band Almost DEAD MEN yesterday I compared them to post-punk power-poppers Carter the Unstoppable Sex Machine (or Carter USM as they are better known),the South London duo which, in my humble opinion, was perhaps the greatest song writing collaboration the UK has seen. You think I’m joking, right? What about The Beatles you say, or Elton John and Bernie Taupin, or even C-USM’s London neighbours, Squeeze?

Well no, I’m not joking. Les ‘Fruitbat’ Carter and ‘Jim Bob’ Morrison, the guitarist and vocalist respectively (other instrumentation was mainly provided by way of backing tapes) were song writers every bit as skilled if not more so than Lennon and McCartney, and Tilbrook and Difford. And that skill was particularly manifested in fantastic lyrical dexterity.

Even the wordplay title of many of their songs alone is testament to that ability.

Here’s a list of some of their wordplay song titles, written between 1990 and 1998. It isn’t comprehensive – there might be other puns out there that I haven’t ‘got’ – but it does give a flavour of the power of that wordplay.

Born on the 5th of November

The Road to Domestos

The Taking of Peckham 123

Sealed With a Glasgow Kiss

My Second to Last Will and Testament

The Only Living Boy in New Cross

Do Re Me, So Far So Good

Lean on Me I Won’t Fall Over

The Life and Soul of the Party dies

The Man Who Bought the World

A Nation of Shoplifters

We Three Kings of Orient Aren’t (as the band’s predecessor, Jamie Wednesday).

It occurred to me that it is the 30th anniversary of the chart-topping, EU-baiting, ‘1992- The Love Album’. Of their seven studio albums it is the one that defines them, as far as I am concerned. While there are exceptional tracks on all their albums, TLA is absolutely chock full of them from beginning to end; all 11 tracks on the Deluxe version. If ABC’s ‘The Lexicon of Love’ is the epitome of the romantic album then TLA is its equivalent for the lost tribes of the late 1980s and early 1990s in the Thatcher years in the UK. The unemployed, the sick, the downtrodden, the council estate inhabitants, the homeless, the drink and drug abusers, the rootless kids and the young offenders.

I’ve still got a cassette of TLA from when I had a cassette player in the car. It was on all the time, relentlessly. I don’t know how it survived.

The album is on a ‘loop’ in that the instrumental opening track, ‘1993’ starts with the same gentle piano melody that the final one ends with before it explodes into the sort of joyous celebration that might be the music that accompanies a grand firework display on New Year’s Eve on the stroke of midnight. Or a football team might come down the tunnel and onto the pitch to it.

But it’s a deliberate false trail and the second track, ‘Is wrestling fixed?’ immediately lapses into the sarcasm and bitterness that defines the album.

“Does a new born baby cry?/Did Elvis really die? And I said to myself, Is wrestling fixed?; similar figures of speech dominating the continuing lyrical content (“Did Little Red Riding wear a hood?/Did the three bears shit in the woods?/Was Humpty Dumpty fat?/Does the Pope wear a funny hat?”)

The third track is probably the most played of all of Carter USM’s work, ‘The only living boy in New Cross’, a skit on Simon and Garfunkel’s ‘The only living boy in New York’. (New Cross is a particularly tough dockland area of southeast London, home to the infamous Millwall football club). A brilliant take on (then) current events, referencing street – and particularly Cockney – patois:

In the anti-celebrity ‘Suppose you gave a funeral and nobody came’, Morrison rages with wonderful oxymorons:

Then, in ‘Look mum, no hands’ the duo scorchingly lambasts terrorism, which (it’s easy to forget) was viewed as acceptable as a means to an end in some parts of British society in the 1980s and 1990s, and with lines that hit you in the face like a punch from Tyson Fury.

“Business as usual starts with the sound/Of another damn funeral march through the town/One less for St Nicholas/There’s nothing as vile/Or as sad or ridiculous/As the coffin of a child;

The coup-de-grace is exceptional and so on point:

“And his poor, pathetic parents/So stricken with grief/That they spelled his name wrong on his funeral wreath/Are appealing for no vengeance/On behalf of their son/But they’ve already assembled/and planted the bomb”.

(Incorrect spelling was a common theme with Carter USM. In the song ‘Gas (Man)’ on the subsequent album ‘Worry Bomb’ an “illiterate bored teenager gets spelling wrong on suicide note.”)

Then in ‘Skywest and Crooked’ (possibly named for the 1965 film) they play cards with their futures:

“Skywest and crooked/Twisted and strange as fuck/Outside the bookies/Window shopping for a change of luck;

Skywest and crooked/So your whole world has been a catastrophe/But don’t kill yourself stupid/This ain’t the Dead Poets Society;

If we club together, with all the diamonds we’ve saved/We could look at our hearts and say /We’ve got it in spades.”

The song plays out to a spoken vocal from Ian Dury, of the ‘Life as it is’ soliloquy from Man of La Mancha and then wonderfully segues into the most dramatic, aggressive, punky version of ‘The Impossible Dream’ from the same musical. Sometimes you hear a rock version of a song from an opera or musical and you just know that it represents the spirit of that song better than the original did. Nightwish’s cover of the theme tune to The Phantom of the Opera is one example. This is another.

And so the loop continues, as ‘The Impossible Dream’ fades out, its melody picked up again on ‘1993’, turning it into an arcane concept album. And as such, the album ends on a more positive and hopeful note than one might have expected from what came before it.

While it is the fifth track, I left ‘England’ until the end here. The lyrics – perhaps poetry might be a better word – to this spoken track are sublime.

A song about “the mistreatment of prostitutes”, the entire thing is wonderful, every word of it.

The lyrics here go beyond cutting, they are savage. This section is presumably an appearance before the bench.

“…I was fornicating before I could read or write/And now I can’t stop, sir/I graduated from the University of Life/And the School of Hard Knocks, sir/And my telephone is always ringing/And my number is triple-X directory/Call 0898 treble three/Talk dirty to me…;

Oh come on all ye unfaithful/Joyful, triumphant and pathetically weak/I’ve been Amsterdamned, Reeperbahned, Wham bam no thank you mammed/If the spirit is willing/Then the telephone is cheap/And if you wanna step outside love/You can step outside love, with me…”

And then the finale, the ultimate put down to the Establishment:

“I’m gonna help you with your sickness/Like a Jehovah’s Witness/You’ll be born again and again, and again/So just lie back, close your eyes and think of England/And what England’s done for me.”

If you want to know what life was like in the UK in that period you don’t need no education, man. Just listen to this album.

I could go on forever, there is something to admire in just about every song they ever wrote.

And I’m prompted to raise an issue again which I did a month or so ago. Where are the protest songs these days? There’s more than enough to protest about after all. Does Carter USM have to get back together (again) to fill the huge gap?

Oh, one other thing. With Carter USM there was always, ALWAYS, a tune.